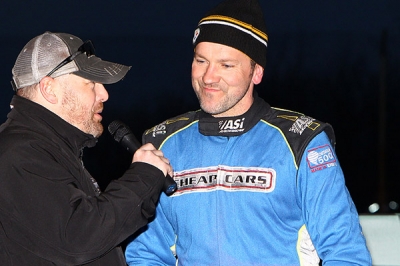 La SALLE, Ill. (March 26) — The quick-witted humor that made Brian Birkhofer such a popular — and quotable — race car driver didn’t wane during his year-and-a-half away from the sport.

When Birkhofer was asked to review his first weekend of competition since September 2014 after finishing an unspectacular 10th in last Saturday night’s 75-lap Thaw Brawl finale at La Salle Speedway, he sounded like the joking, fun-loving Birky of old.

“It was kind of like a Pittsburgh Steelers-getting-beat-by-the-Cleveland Browns type of thing,” he said, comparing his unsatisfying comeback performance to watching his powerhouse favorite NFL team lose to a perennial league doormat. “Something like that.”

Birkhofer, 44, of Muscatine, Iowa, smiled and laughed after offering that quip in the pit area of the quarter-mile oval. While his ultra-competitive nature certainly craved better results, he couldn’t really be too disappointed. He was, after all, back in the cockpit, beginning a new chapter in his motorsports career 18 months after announcing his indefinite retirement from driving upon winning the Knoxville Late Model Nationals with a storybook last-lap pass.

Lured back into action by a deal to run an undetermined number of Super Late Model events this season in a new Vic Hill-powered MasterSbilt machine from the Gheer’d Up Race Cars stable that features three-time and reigning IMCA Late Model weekly series champion Justin Kay of Wheatland, Iowa, Birkhofer relished the opportunity to visit with friends he hadn’t seen and interact with fans who idolize him.

“It’s kind of crazy,” Birkhofer said, considering the attention his comeback brought him at La Salle. “There’s a lot of people that said they missed me … a lot of competitors, people I’ve raced against, fans, crew guys. I didn’t realize that either I had that much respect or that I’m just goofy enough that I bring a smile to some people’s faces, so it felt good.

“But ultimately, when it’s said and done, I run 10th or 11th tonight, and last night was last night (he crashed in a heat race and failed to qualify for Friday’s 50-lap preliminary feature). Tonight was an improvement, but I just feel like I’m a way better racer than that. But everybody’s been racing … I’m not whining about anything. I need to go home and just get better.”

Birkhofer brushed off any suggestions that his struggles to get rolling at La Salle — a track where he has enjoyed success in the past, including a $10,000 victory in the 2013 Thaw Brawl — should be written off to rustiness from his long layoff. He didn’t deny that he needed to get back in rhythm, but he asserted that his biggest challenge was figuring out an unfamiliar car and meshing with his new team.

“I just didn’t feel …” Birkhofer said, his voice trailing off for a moment. “We tried to do things, we changed a lot. These guys worked their tails off, and I just tried to get a feel like I want with the front end. I kind of had that with the Rockets the last time I raced, but these are different cars. There’s things I look at underneath there that look similar, but I want to change some of it.

“Tyson (Gheer who oversees the Gheer’d Up Race Cars shop) and Justin (Kay) and (crewman) Zach (Frields), they’re all open to what I wanna do somewhat, so that’s good. I’m not saying that I know what to do, but I think that I have a better idea that we just need to go in a different direction a little bit. We ain’t gonna recut the car in half or anything … we just gotta do typical racing stuff. You know, take our notes …

“I have rust, but the car, they got a good package,” he added. “I think we just need to do some more work. I’m gonna try to go up there (to the team’s shop) a couple three days before the next time we race and do some changes. I gotta educate myself on the shock program, too. There’s lots of positives, but we just gotta get more consistent.

Birkhofer’s weekend wasn’t made any easier by his rough Friday evening. A few laps after a scrape with Rich Bell of Sheffield, Ill., sent Bell spinning in four during a heat race, Birkhofer lost control and slammed the homestretch wall. His car was towed off with right-side damage and he was done for the night, forcing the team to make repairs rather than make laps.

“When that all came down, I was like, ‘I’ve hit the wall harder than that and drove away,’ ” Birkhofer said of the accident. “But this time, it broke both the ball joints and it ran up over the tire.

“It all started all with me making a mistake way off of (turn) four … but I learned two or three years ago, just shake your head. It’s racing. I’ve been so bad and missed races and I’ve won some of the biggest races later in my career, so I know how the ups and downs work. I mean, I was bad this weekend … we got a little bit better, but I know we can be better than this. So I was like, ‘Well, I just gotta wait my time.’ ”

That comment aptly demonstrated the desire and drive still burning inside Birkhofer. He seemed primed to race more, to recapture his winning form — and do it without the pressure of funding his own effort and racing for a living.

“Yeah, I had fun,” said Birkhofer, whose next starts in the Gheer’d Up No. 15b are tentatively scheduled for April 15-16 Corn Belt Clash/MARS DIRTcar Series-sanctioned events at Davenport (Iowa) Speedway and 34 Raceway in West Burlington, Iowa. “Everybody was cool … but, I mean, it kind of felt weird after I crashed last night. They’re out there interviewing Bobby Pierce for fast time and then I get interviewed, and I haven’t even done nothing yet. That was one of the biggest things about me coming back racing and doing interviews or this or that — I’m coming back, but I haven’t raced, I haven’t done anything. I mean, I did stuff in the past, but to me, that’s over with. I’m just like a new guy coming back.”

And Birky admitted that he’s glad to be back.

“I’ll get to race some, get to golf some, get to camp some,” said Birkhofer, who has been enjoying spending time with his wife, Alissa, and their two young sons (7th-grader Creed and 4th-grader Cruz). “I can just do a little bit of everything now.”

“That was one of the biggest things about me coming back racing and doing interviews or this or that — I’m coming back, but I haven’t raced, I haven’t done anything. I mean, I did stuff in the past, but to me, that’s over with. I’m just like a new guy coming back.”