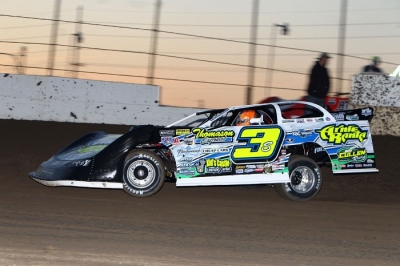 Brian Shirley gets up to speed at La Salle. (mikerueferphotos.photoreflect.com)

“Have you ever started a season this good?” DirtonDirt.com’s Michael Rigsby asked Shirley to begin an interview in the pit area. | RaceWire

Shirley, 34, of Chatham, Ill., initially attempted to answer by identifying a comparable kickoff to a campaign, but he quickly gave up.

“It’s been … no, no, no,” Shirley said. “Not at the caliber we’re running, with the type of people we’re running against.”

Shirley pointed out that his success so far — including his post-Speedweeks points ranking of third on the WoO tour, which he is seriously considering following full-time this season — has not come by accident. It’s the product of an aggressive effort put forth by all members of the team.

“It’s really got a lot to do with Bob Cullen and Arnie Ranta — really all the sponsors, just everybody who really helps us,” said Shirley, who turns 35 on April 2. “We’re really trying to do our best to keep up with (Josh) Richards and (Jonathan) Davenport … them guys have really set the bar high, so we’re just trying to do our due-diligence and do the best we can and hopefully just keep going as good as we’ve been.”

Shirley, of course, was on the verge of disappearing from the Dirt Late Model scene after suffering through a forgettable 2015 campaign — with his wife, Shannon, battling health problems, he cut back significantly on his racing schedule, won just one feature and split with Riggs Motorsports late in the summer — and deciding in the fall to sell his own racing equipment. But he was given new life by Cullen, a veteran racer who stepped up to serve as Shirley’s car owner after providing the former UMP DIRTcar Summernationals and national weekly series champion a ride for several events last year.

Armed with Longhorn Chassis purchased from Tennessee standout Randy Weaver’s shop, strong Pro Power engines, a lengthy list of sponsors and very capable crew and technical assistance, Shirley has all the ingredients to truly unleash the potential he’s had simmering inside him since first gaining widespread attention with his 2006 Knoxville Late Model Nationals triumph as a fresh-faced 25-year-old. He also has the unqualified support of his family — most notably his wife, who has given him the green light to devote the substantial time necessary to compete at the sport’s highest level.

“People don’t realize that … just like Wednesday night, we went and tested,” Shirley said, detailing the behind-the-scenes dedication that is the only route to results on the racetrack. “We’re trying to do the things that them (superstar) guys are doing and trying to put in the time. Really, most people that are sacrificing — which is my wife, so I definitely want to dedicate this race to her and my kids, because being able to (spend time away from home and) go to Speedweeks, being able to go test last Wednesday, being able to go test next week ... it makes a big difference.

“And everybody’s working hard — Matt (Logan) at JRI (Shocks), Kelly and Jimmy back at the shop, everybody is working so hard to keep all these ducks in a row. And Chad and Roscoe, they work on the car all week long, and if it wasn’t for them guys we definitely could have had something fall off.

All those hours put in away from the track helped give Shirley the nearly perfect race car he steered to the checkered flag at La Salle.

“I actually ran my heat race there and just felt really good,” said Shirley, who won his preliminary event. “So I was like, ‘Let’s just leave it alone. We’ll go out there and see what we can get,’ because I knew the track was really probably not gonna get too much slicked off.”

After grabbing the lead from Jared Landers of Batesville, Ark., on lap 16 and controlling the remainder of the distance, Shirley had his first of what he hopes will be many wins to come with his new team. He even was able to share the moment in victory lane with some of his supporters.

“Tonight was good because Dougie from Cheap Cars (one of Shirley’s sponsors) was here and Arnie (Ranta) was here,” Shirley said. “Bob (Cullen) will be a little bummed (about missing the win), but he’ll be here (for Saturday night’s $15,000-to-win Thaw Brawl finale) and hopefully we can put in a good run.”