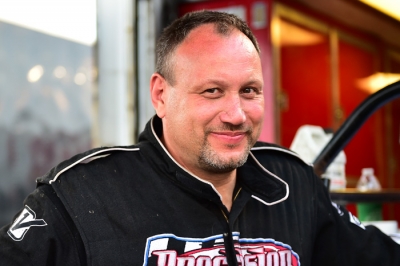 Dave Eckrich has been driving race cars for more than two decades. His heart rate still gets pumping a bit faster as the green flag waves on a new season.

"You're anxious," Eckrich said recently from his race shop in Cosgrove, Iowa. "You don't get quite as crazy as you used to. When you're young, it's like having buck fever. Race fever. But yeah, we still get pretty excited about it."

Eckrich, 46, is eager to see what happens in his first full season in a Black Diamond Chassis after switching to the hot brand late last year. He gets going this weekend at the Thaw Brawl in La Salle, Ill., a multi-sanctioned, doubleheader event capped by a $15,000-to-win finale.

Moreover, Eckrich is hoping to contend for a championship on the Lucas Oil Midwest Late Model Racing Association Series, which opens its schedule April 1-2 with the Spring Meltdown at I-80 Speedway in Greenwood, Neb.

This after a disappointing ninth-place finish in MLRA points as Eckrich returned to the circuit in 2015. He's a past MLRA feature winner at the tour’s flagship track, Lucas Oil Speedway in Wheatland, Mo.

"We're going to start our racing the MLRA and see how it goes," Eckrich said of his 2016 plans. "We'll make a judgment sometime in June and decide whether we're going to stay on it throughout or hit and miss."

Eckrich, who comes from a racing family with brothers Denny and Andy also long-time dirt-track competitors, said last season "was kind of disappointing as a whole."

"We didn't have that many good runs and it seems like when we did have a good run, we had some breakage," he said.

The switch to Black Diamond for the final five races did not produce any victories, but it did spark some renewed optimism.

"It was real encouraging," Eckrich said. "We learned a little bit with it, then went down to Florida and helped a few guys and learned a little more. We're encouraged and hopeful that we can start off on the right foot."

Eckrich, who builds and sells race cars out of the family's Precision Performance Racing shop, said keeping pace with rapidly technology in the Late Model world is challenging.

"The aerodynamics plays a big part of the game right now," Eckrich said. "There's some rules that need to be addressed about aerodynamics. It's really hard to keep up with all the stuff unless you're full time and don't do anything else."

That doesn't mean Eckrich is backing down from big goals. He would like to win an MLRA championship, but knows it'll be tough with the like of reigning series champ Terry Phillips and last year's runner-up Jesse Stovall around.

"We have to have everything go right," Eckrich said. "To race against Terry on his home race tracks is kind of hard sometimes. But that's our goal, to win the MLRA championship."