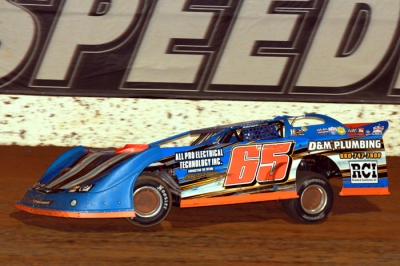 The winter has zoomed along faster than normal for Jon Binning, who wasted no time getting to work on his Late Model after the 2015 Lucas Oil Speedway season concluded.

"We're getting real close to having the car ready to go," Binning said. "It's the earliest we've ever been ready. We didn't hesitate after last season. We had an odd year."

Binning and his Rocket Chassis will be on display at the Lucas Oil Speedway booth during this weekend's fifth annual KOZL Man Show at the Springfield Expo Center. The Warrensburg, Mo., driver, the 2014 Lucas Cattle Company United Late Model Association champion, is hungry to return to championship form.

Three disastrous races doomed Binning last season at Lucas Oil Speedway, relegating him to a fifth-place finish in the ALPS Food Store ULMA Late Model Division. His goal, along with chasing another ULMA crown, is to win a track championship at the Wheatland oval to go with two earlier track championships he won at Central Missouri Speedway, his hometown track.

"Last year we blew a motor the first night and (a few weeks later) a guy spun in front of me and took the front end clear out of the car," Binning said. "Then a guy got into us during a heat race and I backed it into the wall.

"Other than that, we had a good season. Just three nights of bad luck and it ruins your chances of winning a championship."

"We raced six times that first year and seven times the next," Binning said. "By the third year, we ran a full season and have been at it ever since."

Binning captured his first track championship in 2008 at Central Missouri. He made a broader splash with his 2014 ULMA crown over Dwight Niehoff by a single point.

He's planning to run the usual Warrensburg-Wheatland schedule this season and, as he's done in the past, occasionally drop in on some Lucas Oil MLRA events. The mindset is simple.

"I really go out with the intention that I'm going to win every, single night," Binning said. "I know that's not possible, but you have to go out there thinking  you're going to win."

Binning will be at the Man Show with his car at the Lucas Oil Speedway booth, with information and schedules for the 2016 season available. Hours are noon-9 p.m. Friday and 10 a.m.-6 p.m. Saturday.

The event offers over 90,000 square feet of indoor exhibitor space with displays showcasing a wide range of new products, services and programs that men will find useful in their professional and personal lives.

Tickets are $15 at the door, but $10 in advance at area O'Reilly Auto Parts stores. Kids 12-and-under are admitted free, as are all women who accompany a man with a paid admission.