Iowa's Wyman looks for next step with MLRA 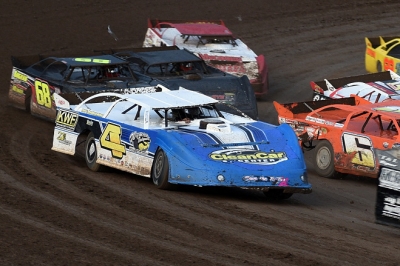 Hailing from a state that produces dirt racing talent like it grows corn, J.C. Wyman is eager to add his name to the driving elite.

"It makes it challenging," Wyman said of the Iowa tradition of Late Model excellence that includes familiar names like Birkhofer, Webb and Simpson and historic names like Sanger, Derr and Walton.

"Knowing the group of guys I grew up watching and racing with, for them to be able to out-compete me sometimes is discouraging," Wyman said. "But hopefully, with the new car and the knowledge that I've gained, that'll really help me out."

Wyman, 33, is ready to take the next step in his career. The Griswold, Iowa, resident is planning to campaign a new Black Diamond Chassis in his second full season on the Lucas Oil Midwest Late Model Racing Association circuit. This after an up-and-down eighth-place finish in MLRA points last season.

"Finishing eighth in the points, with those guys, I was pretty happy with that," Wyman said. "I got a couple of top-10s, but I was disappointed that I didn't have any top-fives. The end result, though, eighth in points, was a little better than I expected."

Wyman, a former NASCAR Whelen Racing Series state champ from 2012 at Corning's Adams County Speedway, thought he was ready to take the plunge into regional touring racing in 2014. But his first taste of the MLRA was eye-opening.

"In 2014, we started out trying to follow it and ran the first 8-10 shows," Wyman said. "We realized that we weren't quite ready for it yet. We backed off and went back to local racing and prepared ourselves for 2015."

Things went much better. Despite the void of top-five finishes, Wyman found that he belonged and learned plenty along the way that should serve him well in the upcoming season.

"Man, I learned a lot," Wyman said. "Just how to race these other top drivers. You can race then hard, but you can race them clean. You get on the edge of being out of control, yet you're in control. I learned a bunch about car control."

There also was the camaraderie in the pits. Wyman felt like he had mutual respect that grew as the year went on.

Racing is a family tradition for Wyman that dates to the late 1950s when his grandfather, Jim Wyman, raced on Iowa dirt. Later, his uncles Mark and Jerry Wyman competed at Adams County, where J.C. Wyman began his career in a modified at age 16.

Wife Liz and Wyman's father, who goes by "Little Jim," help on the crew. Jeb Peck serves as crew chief and his value is obvious.

"Jeb has been a tremendous help since coming on board a couple of years ago," Wyman said. "He knows what I need to do and what needs to be done. I'm impressed with the ability he has brought to the team."

The new Black Diamond is scheduled to arrive next week with the season-opening MLRA Spring Meltdown firing up April 1-2 at I-80 Speedway in Greenwood, Nebraska.

"The goal for this year is getting a couple of podium finishes," Wyman said. "That and having fun."

"Man, I learned a lot. Just how to race these other top drivers. You can race then hard, but you can race them clean. You get on the edge of being out of control, yet you're in control. I learned a bunch about car control."