Other events keep him busy, but Simpson still driven 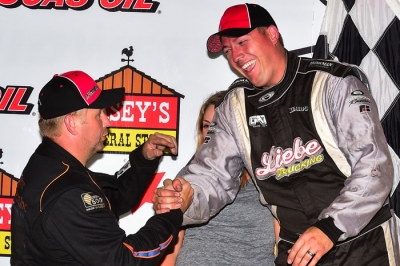 “I have a daughter playing club basketball and I’ve been traveling around doing all that stuff,” Simpson said earlier this week from his home in Mount Vernon, Iowa. “It’s been fun.”

As daughter Peyton (10) and son Clay (7) get more and more involved in activities, Simpson’s racing schedule will be affected. The 2014 Lucas Oil MLRA Series champion said he’s going to “pick and choose” his races carefully in 2016.

“The kids are getting a little older,” Simpson said. “They’re playing sports, with softball and baseball this summer. We’ll see where their games are and we’ll go racing when we can.”

This is not to say that Simpson, 37, is going to be any less committed or less competitive when he rolls into a race track. His first scheduled races are the Lucas Oil MLRA Spring Meltdown, April 1-2 at I-80 Speedway in Greenwood, Neb.

Simpson said he might not chase any touring series full time, but his mission remains clear when he fires up the motor.

Simpson won five times in 2015, including once on the MLRA circuit at South Dakota’s Park Jefferson International Speedway. The original plan to chase a repeat MLRA championship fell part early with some DNFs, but Simpson said it turned out to be a “pretty good” season.

The finish was especially satisfying. Simpson captured his first victory in a national-touring series event when he won a $7,000 feature during the 12th annual Lucas Oil Late Model Knoxville Nationals week at one of his favorite tracks, the legendary Knoxville (Iowa) Raceway.

“I’ve been doing the Dirt Late Models since about 2003 and I always had in the back of my mind a goal to win a national tour event,” Simpson said. “Whether it was World of Outlaws or Lucas Oil Dirt Series, it’s always been a goal to win one of those races.”

Coming at historic Knoxville, in his home state late in the 2015 season, was icing on the proverbial cake.

Armed with that momentum, Simpson heads into the new racing season with no significant changes in his program. He’s back in Victory Circle Race Car with Jay Dickens Racing Engines.

With youth softball and baseball games to attend, Simpson’s schedule is fluid. But he does have one of Dirt Late Model racing’s crown jewel events — the 24th annual Lucas Oil Show-Me 100 presented by Protecttheharvest.com — circled on the calendar.

“We’re looking forward to making it down there and seeing if we can do something,” Simpson said. “We’ve kind of struggled in the past trying to get qualified for it. I know if we can qualify good we can run good in the main.”

“I’ve been doing the dirt Late Models since about 2003 and I always had in the back of my mind a goal to win a national tour event. Whether it was World of Outlaws or Lucas Oil Dirt Series, it’s always been a goal to win one of those races.”