Doar gets back on track with NASCAR track title 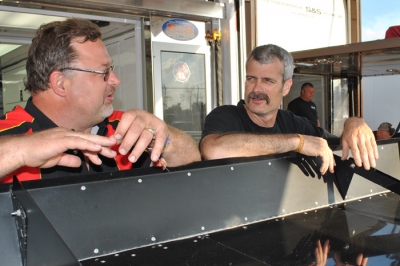 In the world of NASCAR racing, news often develops from the achievements of up-and-coming young drivers, veterans can still get it done too.

A perfect example of that during the 2015 NASCAR Whelen All-American Series season was the performance of Pat Doar at his hometown Cedar Lake Speedway in New Richmond, Wis.

The 52-year-old driver rebounded from a back injury suffered in early June and made the most of his opportunities during the six-race NASCAR Dash program at the historic speedway to capture a title worth $10,000.

The injury was one that could have cost Doar any chance of a successful season as he was out of commission for a period of time trying to get his back to heal properly so he could return to action.

“I was down in traction with my back in June and missed a couple of special events at the track,” Doar said. “I can’t thank Mark and Johnny Emerson enough for helping me out with the car, especially while I was recovering from my back trouble.”

Doar was mounting a tire when he felt something pop in his back and that kept him out of the No. 11 Capital Race Car that’s equipped with a Pro Power Engine and sponsored by Speedwerx and S&S Transport.

“Thankfully I was able to get back behind the wheel in time for the NASCAR dash,” Doar added. “There is no way I could have come back ready to race without their help.”

Cedar Lake's NASCAR Dash was a series of six races used to determine the track champion in the NASCAR Whelen All-American Series at the 3/8-mile oval.

Doar won half the races and posted four top-five finishes, never finishing outside the top 10. The track ran a pair of sanctioned events for three consecutive months in June, July and August.

“We had some good luck and were able to tune up our new Capital car and go fast right off of the trailer,” Doar said. “Things just worked out for us this year at Cedar Lake.”

Doar has been racing Dirt Late Models since 1994 and has found success locally, regionally and during a stint on the World of Outlaws Craftsman Late Model Series.

“It’s been a great journey, and like anything we’ve had some ups and downs, but I want to thank my wife Nancy who’s been married to me since 1994,” Doar said. “She’s been with me through it all and I couldn’t have done anything without her support and I really appreciate her support.”

There was a time a few years back when Doar questioned his ability to win, and he was able to work with Capital Race Cars owner Marshall Green and reigning WoO champion Shane Clanton, who helped Doar get back to winning on the track.

“I really appreciate what those guys did for me because they gave me a fast car and made me look good on the racetrack again,” Doar said. “There for a while I wondered if I would ever win another race.”

While he races all over the country, including each January in Arizona, his bread is buttered at Cedar Lake.

“I want to thank the Kaufman brothers (Bob, Chuck, and Steve) and Brad Both for giving us racers a nice place to race and for bringing NASCAR to the track,” Doar said. “They give us a nice points fund with their NASCAR Dash program and NASCAR and Whelen Engineering do a great job rewarding their champions.”