The Dome at America's Center 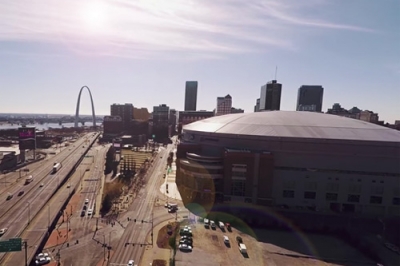 Dirt Late Model fans will get an early Christmas gift in 2016 with the biggest indoor stock car event in 34 years. And the Gateway Dirt Nationals promotional team plans to use the next 10 months to put the perfect bow on the event, making certain it’s worth the wait.

Co-promoter Cody Sommer sees the Dec. 15-17 event at the Edward Jones Dome in St. Louis, Mo., growing into "one of the greatest short-track events” when Dirt Late Models and open-wheel modifieds hit the fifth-mile temporary oval in the 67,000-seat stadium.

“I'm a businessman and I look at things as 'What is the big picture?’ … Thinking about the future, thinking about the impact that this can have,” Sommer told DirtonDirt.com’s Ben Shelton in an interview earlier this week at Volusia Speedway Park in Barberville, Fla. “I'm excited about the long-term aspect of it.”

Sommer and his co-promoters feel confident they’ve got the perfect venue with a stadium situated in a racing hotbed surrounded by several successful dirt tracks, a 1.7 million square foot complex that offers plenty of room for pit areas, and the opportunity to fill open dates at a downtown facility that recently lost its biggest tenant, the NFL’s Rams.

“You know, one of the things that is really exciting about a venue like this is the space that's available,” Sommer said of the Edward Jones Dome, which has previously hosted AMA Supercross events and Monster Jam monster-truck competition. “One of the first questions that a lot of people ask, especially the teams and competitors, the last thing they want to be doing is unloading in the snow or in the cold, or pitting in the snow and the cold.

“That's really the beautiful part about the Edward Jones Dome is it's a 1.7 million square foot convention center and a dome. Really having the two tied together, there's really no place in America quite like it. There's obviously big domes and big floor footprints to put larger racetracks in, but when you put the whole package together, it's the only place to do something like this.”

For fans who typically bundle up for off-season events, the temperature-controlled setting will mark the first major indoor stock car event since March 6, 1982, when Dirt Late Models highlighted the Super Bowl of Dirt at Pontiac, Mich.’s Silverdome, an event won by the late Jack Boggs.

The promotional group knows those challenges well after hosting last December’s Bad Boy Indy Invitational, a race for midget race cars on a 1/10-mile oval at the Bankers Life Fieldhouse in Indianapolis, Ind. Sommer is confident the massive St. Louis floor space will provide a worthy racetrack for the larger Late Models and modifieds.

“Fifth-mile is what we're saying, but it's actually a little bit bigger than a fifth-mile,” he said. “It’s about 60 foot longer than Macon (Ill.) Speedway, so a lot bigger than maybe what we dealt with in the past. I've had a lot of messages and a lot of emails and a lot of people asking questions since we announced knowing that I was a part of the group that did the Indy Invitational and we had a lot of success.

“We learned a lot from that and I think we'll be able to apply that and one of the positives is having that large footprint we're able to build a much larger racetrack and have a exciting race with that with banking built in and the things that you really need to do to do it the right way.

“It was hard for us to do that in Indy because we had 10 hours to build it with (NBA’s Indiana) Pacers playing before. Obviously now we have more time and we're going to really be able to do it the right way. We're really looking forward to that.”

The Indy Invitational drew a solid crowd, but breaks to rework the track and three delays for ventilation issues lengthened the racing program considerably — a teachable moment for the promoters.

“There's not many people, promoters or organizers that can really say they went through that. A lot of people will never understand what we went through in Indy,” he said. “Again, we learned a lot of great things. We packed the place. It was a very successful event from that regard, marketingwise, promotionwise, the track surface issues and whatnot. Again, we're able to take the experiences that we learned there, apply them to this event and even do a little bit more thinking.”

The 10-month buffer before the Gateway Dirt Nationals provides "a lot more time to plan and do things the right way” compared to Indianapolis, Sommer said, because that event wasn’t confirmed until three months ahead of time and racing weekend was squeezed in amid other events.

“Here we are, we've got, call it 10 months, before the event and have a lot more time to plan and do things the right way,” Sommer said. “We’ve already been working on that, so we're extremely excited about that.”

The interest and response to the event’s announcement this week was a boost to promoters, and Sommer hopes plenty of racers are willing to compete at the December event.

“I don't think that we'll ever fill that place from a competitor-car perspective, but you know what? I'd love for people to prove me wrong on that, of course,” he said. “I think the industry would really benefit from that.”

“That's really the beautiful part about the Edward Jones Dome is it's a 1.7 million square foot convention center and a dome. Really having the two tied together, there's really no place in America quite like it. ... it's the only place to do something like this.”