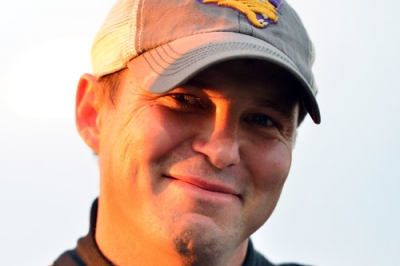 That consistency led to a career-best third-place finish in the Lucas Oil Midwest Late Model Racing Association standings. Certainly it was a year that many gladly would have embraced. But as a new season nears, the Iowa corn farmer is willing to trade some of that consistency for celebratory trips to victory lane.

"We're gonna try and win more races instead of trying to run for points," Utter said recently from his home in Columbus Junction, Iowa. Utter said "we came out all right" in evaluating last season, but said he became a bit too conservative.

"I kind of got caught up in that points deal and I was content with running second, third or fifth when I probably should have moved up the track and got up on the cushion and let it hang out," Utter added. "So I think we'll go for more wins this year."

Utter, 36, will be busy over the new couple of months. There's a racing season to prepare for, with the Lucas Oil MLRA Spring Meltdown at I-80 Speedway in Greenwood, Neb., set to kick it off April 1-2.

There's also corn to plant. Utter and his father, Bob Utter, own farms in eastern Iowa and keep a close eye on the commodities market.

These days, Jason Utter will quickly tell you, corn is cheap. That might be good for the grocery shopper, but not so much for the farmer who depends on his crop sales to make a decent living.

And when you have a race team? The market price of corn can determine a season's schedule and whether it's feasible to chase a series from track to track.

"It's pretty expensive to run up and down the road," Utter said. "If the corn prices will go up a little bit, we'd commit to (MLRA). But at the moment, the corn is down and the financial part is a stickler with us. But hopefully, it works out."

Utter is eager to battle the likes of reigning MLRA champ Terry Phillips, Jesse Stovall and fellow Iowa standout Chad Simpson for victories. Utter often found himself content for decent finishes in 2015 as those drivers celebrated.

Year Two in a Black Diamond Chassis figures to be better. He settled into one of the hottest brands in Late Model racing a year ago after a long stretch in a Mastersbilt Race Car.

"We went through the notes during the winter and picked out the pages that were good," Utter said. "We'll try and use those."

Racing and farming always has been a family affair for the Utters. Jason began racing go-karts at his dad's Spring Run Speedway as an 8-year-old. Now the two coordinate the racing and farming with Bob Utter serving as his son's crew chief when they aren't spraying crops or driving combines.

"I'm fortunate in that my dad allows me to help him put the crops in and then go racing in the summer," Utter said. "It works out pretty good where in the summer he overlooks the farming operation. Then come the fall, I'm back on the combine."

Winning races — along with running for an MLRA championship — would be his ideal scenario.

"I'm fortunate in that my dad allows me to help him put the crops in and then go racing in the summer. It works out pretty good where in the summer he overlooks the farming operation. Then come the fall, I'm back on the combine."