Notes: Heckenast gunning for gator in '16 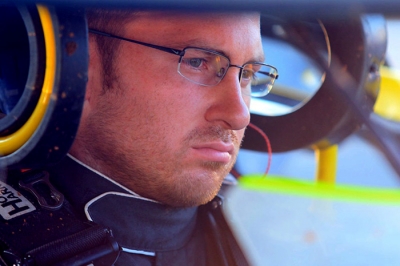 Frank Heckenast Jr. realized a dream during Georgia-Florida Speedweeks 2015 with his first-ever World of Outlaws victory at Bubba Raceway Park in Ocala, Fla. This year the Frankfort, Ill., driver has his hopes set on capturing a different prize during his season-opening trip to the Sunshine State. | Complete Speedweeks coverage

“I really want to come home with a gator this year,” Heckenast said, referring to the unique trophy given to every feature winner during the DIRTcar Nationals at Volusia Speedway Park. “I really just want to win another Outlaws race. I’m not one of these guys that says they want to win 10 races — you have to win the first one before you win the 10th one. But I think a win will start off the season nicely … if we can get the first win, it will roll into the next.”

The 27-year-old Heckenast will have to pick up the pace from his ’15 performance at Volusia, however, if he expects to bag another Speedweeks checkered flag during the half-mile oval’s Feb. 15-20 meet that includes three UMP DIRTcar-sanctioned races and three WoO programs. His best finish in the five DIRTcar Nationals events run last year was a 16th in the WoO opener.

Heckenast’s Speedweeks action will kick off his third full-time WoO campaign. The tour’s 2014 rookie of the year is coming off his second straight eighth-place finish in the points standings, but he showed significant improvement last year with his milestone triumph, eight top-five and 17 top-10 finishes.

“I’m for sure going to do the World of Outlaws again,” said Heckenast, who will steer his family-owned Club 29 Race Cars again in 2016. “We're going to hit it full swing. What (the WoO) has done with their schedule this year is awesome (streamlining the travel and including more summer breaks) — I really like it.” — Jordan Morris

“You know how us race car drivers are,” Casebolt said in a DirtonDirt.com interview with Michael Rigsby. “We’re non-committal. But we’re for sure going to Screven to start the year off. If we have a good experience there and everything’s intact, we’re going to try to hit up Bubba Raceway Park for the Lucas Oil race in Ocala, Fla. And then after that we’re going to hit up Volusia Speedway and try to leave Florida with somewhat of a good position for those points for World of Outlaws. That’s as far as it goes though. After that, everything’s up in the air.”

Screven will mark the start of Casebolt’s second season with car owner Tye Twarog. Closing the 2015 season with five victories, Casebolt said he’s found a home with his race team.

Tye’s (Twarog) been great to deal with,” Casebolt said. “He gets us what we need and it’s just working out really well. I still have some say-so in things because everything’s here at my shop, so it’s not a thing where I’m totally disconnected from my race team and can’t work on my race car and don’t really know what’s going on. So that’s great because I’m kind of a hands-on kind of guy. I want to work on that car and I want to be there with it and make sure everything’s going right.”

While Casebolt found success during the 2015 Georgia-Florida Speedweeks, he knows how tough the nightly stretches of racing can be. It’s not the trip to Florida most people envision.

“Everybody thinks, ‘Oh you guys are going to Florida, you’re going to be down on the beach drinking margaritas and laying out in the sun,’” Casebolt said. “Well that’s not at all how it works. You work as hard as you could possibly work the whole time you’re there. You never get to go to the beach. You’re usually not out in the weather that much until it’s nighttime and it’s really cold out. That’s the negative.

“The good part about it is, everybody’s there. It’s some of the best fields of competition for the whole season. So if you run well at those races, you know where you’re at. You know you had a good car. You know you’ve done well.” — Alli Collis

The 2015 season saw Chase Junghans of Manhattan, Kan., make great strides on the World of Outlaws circuit. He heads into his Speedweeks activities this year — the Feb. 12-13 WoO events at Screven Motor Speedway in Sylvania, Ga., and the DIRTcar Nationals at Volusia — with designs on continuing his steady progression on a tour that he’s grown to love.

“I plan on running the whole World of Outlaws deal again,” said the 23-year-old Junghans, who will drive his father Greg’s Capital Race Cars in his third year as a series regular. “It's hard not running it when I like traveling and racing with those guys.”

Junghans showed he has the goods to battle door-to-door with the best World of Outlaws stars last year. He earned his first-ever WoO victory in June at Lernerville Speedway in Sarver, Pa., and jumped to a seventh-place finish in the points standings after ending his rookie 2014 campaign 10th in the final rundown.

“I just want to try to do better than I did last year,” said Junghans, who began his 2016 competition earlier this month by running the Keyser Manufacturing Wild West Shootout at USA Raceway in Tucson, Ariz. “I hope we have a shot at the championship this year, but I don't expect to go out there and dominate. Those guys have been doing it long enough, they have paid their dues, but I feel like I can compete with them.” — Jordan Morris

“It’s just the deal when you get everything kicked off,” Marlar said in an interview with Michael Rigsby. “It’s really, really competitive because you’ve got basically everybody that’s going to be a real competitor all season long and everybody’s sharing a couple racetracks there for a couple weeks. The competition level’s very high. But it’s up-on-the-wheel type racing. You know there’s going to be no rest and there’s going to be a lot of action.

Kicking off another season with car owner Ronnie Delk, Marlar said his team is taking an all-in approach to Speedweeks.

“Ronnie Delk, our car owner, you’ve just probably never met somebody more positive,” Marlar said. “I said, ‘It’s going to be hard to get through all these races, we’ve got to be careful.’ He said, ‘No, just give it everything it’s got the first night and if you wreck, give it everything it’s got the second night. If you total that one out, then the third day, we’ll have to take them two and make one.’ That’s his approach on pretty much everything.”

While it’s been a year or two since he last competed in Florida, Marlar’s had past Speedweeks success, with one of his five career Lucas Oil Series victories coming during the 2010 Winternationals at East Bay Raceway Park in Gibsonton, Fla.

“It’s a pretty cool deal,” Marlar said of East Bay. “I’ve not been down there since they’ve changed the tire rule and I’m glad they’ve done the tire rule. It’s a hard track to hit your marks on. Honestly, a lot of the Florida stuff is. But it seems like a place where you’ve got to drive hard, but you’ve got to not overdrive. You’ve got to make sure you’re in the right part of the racetrack all the time. I like racetracks that driving means more than the car does.” — Alli Collis

Randy Weaver of Crossville, Tenn., plans just his second trip to Speedweeks in the past six seasons. Weaver, who won his first eight starts in 2015, didn’t crack the top 10 in eight 2014 Speedweeks starts at Golden Isles and East Bay. … Over the past 10 Speedweeks, Billy Moyer leads with 21 victories, followed by Scott Bloomquist (16), Josh Richards (16) and Darrell Lanigan (10). Moyer plans to spend this Speedweeks serving as crew chief for his son Billy Jr. … Shane Clanton led in 2015 with five Speedweeks victories and nine top-five finishes. … In 13 Georgia-Florida Speedweeks races in 1999, there were 13 winners. … Last year’s Speedweeks events drew 108 drivers, 11 more than 2014. … The $15,000 winner’s purse at Golden Isles is the richest at Speedweeks over the past three seasons.