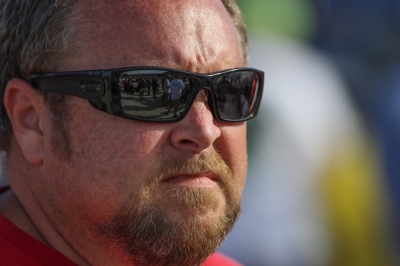 The hair is thinning, his 50th birthday arrives later this year and he answers to "Grandpa.” But don't dare suggest to Terry Phillips that it's time to slow down and head for the early-bird buffet at the local dinner.

"Oh yeah, I'm as fired up as I've ever been," the long-time Springfield, Mo., Late Model driver said earlier this week.

This on the heels of a 2015 that found Phillips in Late Model victory lane only two times, both unsanctioned events. Certainly, it was far from the lofty standards he's set in nearly three decades on the dirt.

But consider his "off" season resulted in a Lucas Oil Midwest Late Model Racing Association championship. It marked his third series title, but first since 1996, on the series that opens the 2016 season April 1-2 at I-80 Speedway in Greenwood, Neb.

"It means a lot," Phillips said of the championship. "We didn't have the year we wanted as far as wins. But winning a championship kind of helps morale. It wasn't bad at all.

"We ran consistent. We weren't winning all the time, but found ourselves leading the points and we thought we ought to finish it off."

Phillips noted that he hadn't chased a series points title "in quite a while." He's been picking and choosing his spots in recent years, targeting good-paying events in both the Late Model and modified divisions.

Plans have not been poured into a concrete mold for this season, but Phillips said he plans to frequent the MLRA schedule again. Whether that translates into points racing and pursuit of a repeat title will depend on how the early portion of the season goes.

Either way, he's optimistic that victory-lane celebrations will be more frequent. A recent venture to the Wild West Shootout in Arizona gave Phillips a chance to shake down his still near-new Black Diamond Chassis that he began racing late last season.

The results in Tucson were not what he wanted with an eighth on the final night his best finish. He was running second early in the feature before popping the wall and compromising the front end.

"We learned some stuff out there," Phillips said. "Hopefully we'll take that and get better. I just started running these cars at the end of last year and just ran the basic setup. When you travel, you have to try some different things and learn what works. It's just a different deal.”

Technology continues to evolve quickly in the Late Model world. Phillips said for a guy like him, that barely knows how to operate a computer, it's a new world.

Shocks are a key issue in dialing the car in, Phillips said, and he discovered some helpful hints about that while in Tucson.

"It used to be you could figure it out on your own, but it's a little different now," Phillips added, noting the need to lean on chassis manufacturers for direction at times.

Phillips sounded a bit like his dad, the late short-track Hall of Famer Larry Phillips, when assessing his internal fire as he ages.

Asked how long he wants to race, Phillips laughed and said, "I'm kind of like my Old Man. If I'm competitive, I'll race. If I feel like I can't go out and win, then I'll quit.

"Right now, I'm feeling like I have plenty of years in me. Hell, I might race 20 more years. We'll see.”