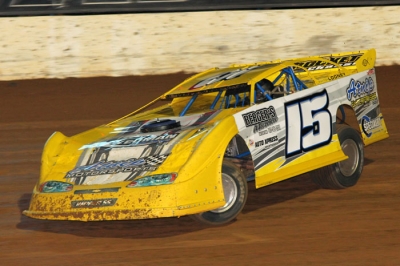 Payton Looney was third in ULMA points in 2015. (cbracephotos.com)

From the start, Payton Looney wanted to earn his own way and learn at his own pace.

Now, after three seasons honing his skills in Limited Late Models, the 21-year-old from Republic, Mo., is ready to launch the next phase of his racing career. Looney plans a full schedule in open-competition Late Models in 2016. He and car owner Jeremy Atnip are preparing a new Late Model from Kryptonite Race Cars out of West Virginia, a relatively new chassis manufacturer.

Looney's father, Brad Looney, was the 2011 MARS DIRTcar Series champion and has been a fixture on the Late Model scene for two decades. Payton Looney, who finished third in Lucas Cattle Co. United Late Model Association points in 2015, said he was tempted to make the leap into the open-competition class sooner.

But showing maturity beyond his years, Looney took a deep breath and waited. He figured the time in the more-affordable ULMA division would serve him well.

"I started my career in a Late Model to begin with and I probably shouldn't have," he said. "If you'd have left it me, I'd have wanted to gone into open Late Models after that first year. But deep down, I knew I wasn't ready yet.

"The more laps you get, the better you get. Taking my time and doing it the right way, I think that's really helped."

There was never any are twisting from his dad about charting a future course. Payton Looney, a senior at Missouri State University, has acquired his own sponsors since starting out and learned the business with a hands-on approach.

"Now if I have a question, he's the first one who will answer it," Payton said of his dad. "But I pretty much do it myself. That's the way he did it and that's the way I want to do it."

"It was good to race against a lot of good people and good competition," he said. "You learn everything you need to learn, continuing to go forward.

"You have to be smooth, you have to be patient and wait for opportunities. You learn that you can't drive over your head."

Last season, four of his 10 victories came at Lucas Oil Speedway. He finished four points behind Justin Russell in the track championship chase, an early season disqualification costing him the title. He took ownership of the mistake.

"We had an ignition box that we screwed up on our end and wasn't right," he said. "That was a zero-point night, so it was like we didn't even show up. It was hard to rebound from. We were like 60 points down and cut it to four at the end.”

Russell said he has no doubt that Payton Looney, who wound up third in the ULMA national standings, will do well as he moves forward.

"I'm telling you, he's a wheelman," Russell said. "That kid can really drive it and he has a bright future.”

"I started my career in a Late Model to begin with and I probably shouldn't have. If you'd have left it me, I'd have wanted to gone into open Late Models after that first year. But deep down, I knew I wasn't ready yet.”