After emotional title, Russell aims for another 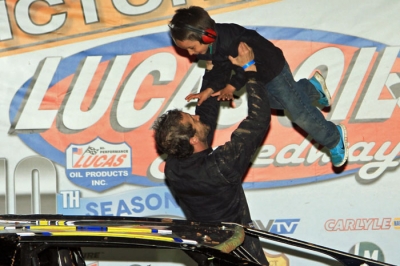 Nearly two months have passed since Justin Russell claimed his first Lucas Oil Speedway track championship. Before turning his full attention to 2016, Russell is letting the euphoric feeling sink in a little longer.

"It's hard to believe that I won a championship, at Lucas Oil Speedway, in a Late Model with all my family there. It's a dream come true," Russell added.

"It's emotional and heartfelt, not only for me, but for everybody involved in helping me."

Family has been a big part of the success story for Russell, a 33-year-old from the small town of Henley located about 15 miles south of Jefferson City.

Justin Russell got behind the wheel of a race car for the first time in 1999 and drove lower-division cars for eight years. After a three-year break, he realized a dream of driving a Late Model and has been doing so ever since.

But winning a championship? Until this year, that distinction belonged to Jason Russell, a former Pitts Homes USRA Modified champ at Lucas Oil Speedway who wound up second in that division this season.

There's no rivalry between the two. Justin Russell credits Jason, 35, with giving him a big assist in how to succeed.

"I've learned a lot from him about how to keep your composure," Justin Russell said. "I've learned about being smart and, overall, just how to be a good human being. He's a really good person.

"He likes to be hard on me at times, but it's just because he's looking out for me and wants the best for me."

Smart driving was the key to Justin Russell's championship. He captured only one feature victory to Looney's four, but kept pounding away. On nights the car was not fast enough to compete for a win, he and the crew — led by Charles Russell — maxed out what they had.

The final night of the season was typical — and nerve-wracking. With Looney dominating, Russell wound up sixth, giving him a couple of positions to spare in securing the title.

"It was tense," Russell said. "We didn't have that great a heat race and started near the back (of the feature) and fell backward even further after it started. But as the track started drying out a little bit, the car started working better.

"It was pretty awesome to win it, for my whole family. My father puts all the work into the car and sacrifices a lot. And my mom (Susan Russell) is my biggest fan."

Russell's sponsors include Taycon/TMI, Bentlage Bobcat, Creason Racing Engines, Backwater Jacks and Shady Gators. "We couldn't do it without them," he said.

While the glow of the championship continues to shine, Russell is starting to focus on 2016. Initially, he considered cutting back his schedule, but quickly concluded there's only one thing to do.

"We're going to run a full schedule against at Lucas Oil Speedway and try to go for back-to-back championships," he said. "In my opinion it's one of the best track-based series in the Midwest.

"I'd like to pick up some more wins. And we'll try to win the championship again."