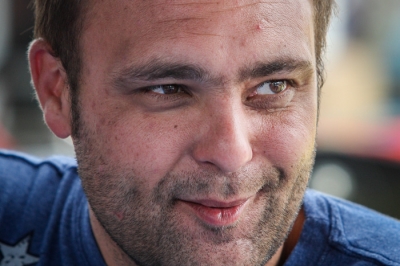 Donny Schatz enjoys driving his Dirt Late Model in the Keyser Manufacturing Wild West Shootout presented by Black Diamond-Club 29 Race Cars at USA Raceway so much, he’s flying in from the other side of the planet to compete in the event’s 2016 edition.

The World of Outlaws Sprint Car superstar from Fargo, N.D., will miss the first two events of the Jan. 9-17 Wild West Shootout while finishing off his winter sprint car racing trip to Australia, but he’ll return to the United States in time to get in his full-fendered fix by entering the Jan. 13, 15, 16 and 17 programs at the 3/8-mile oval in the desert Southwest.

“I definitely look forward to it,” Schatz said of the Wild West Shootout, which he will participate in for the third consecutive year. “When I hear it’s gonna happen, I’m excited as anybody.”

Schatz, 38, has been accenting his busy WoO Sprint Car schedule with Tony Stewart Racing by racing his family-owned Rocket Chassis Dirt Late Model in selected special events for the past four years. The ultra-talented driver’s only Dirt Late Model feature wins so far have come in spec-engine Northern LateModel Racing Association events at River Cities Speedway in Grand Forks, N.D., in 2013 and ’14, but he’s had some strong runs in higher-profile national shows, including earlier this year when he finished third in the July 10 WoO Late Model Series feature at River Cities.

“First and foremost, it’s not a career for me, it’s not a living,” said Schatz, who scored an 11th-place finish in the Nov. 8 WoO Late Model feature during the Bad Boy Buggies World Finals at The Dirt Track at Charlotte in Concord, N.C. (he clinched his second straight and seventh career WoO Sprint Car title during the World Finals weekend). “It’s to have a little fun away from sprint cars.”

And Schatz certainly enjoys himself during the Wild West Shootout, which not only provides him a chance to develop his Dirt Late Model skills but also relax in some desert warmth before his grueling WoO Sprint Car campaign begins.

“Any type of racing you do you’re serious as can be when you’re a competitor,” Schatz said. “But to go there (for the Wild West Shootout) — with the setting in Tucson, and all the great places to eat and see and the atmosphere around it in the middle of winter — it’s all you can ask for. I wish I could be there for the whole time, but I gotta make sure I fulfill my sponsor commitments (in Australia) first and then I’ll get there and go racing.”

Schatz leaves home for what has become his annual excursion Down Under on Dec. 20. He will spend three weeks racing sprint cars in Australia, ending his stint with a final start on Sat., Jan. 9 — the same day the Wild West Shootout opens at USA Raceway. A sponsorship appearance on Jan. 10 will prevent Schatz from immediately flying back to the U.S. to catch the second night of the Wild West Shootout — a banzai trip that he made in 2013 in time to enter Night No. 2 at USA Raceway — but he will be ready for Dirt Late Model competition starting with the Wed., Jan. 13, event.

Schatz’s No. 15 Dirt Late Model will be waiting for him in Tucson when he touches down on American soil.

“I have a couple friends from home who enjoy going out there so they’ll tow the car out,” Schatz said. “Especially when you’re from North Dakota, in the middle of the winter you look for every reason to get to Arizona that you can to enjoy some warm weather and some racing.

“Them guys get the fun part driving out there, and I’ll show up with my helmet and try to do the best that I can.”

Schatz’s best finish in nine career Wild West Shootout event starts (five in 2014, four in 2015) is a 12th-place run in the ’14 finale. He also set fast time one night in 2014, and earlier this year he registered finishes of 13th in the Wednesday-night show and 20th on Saturday evening and failed to qualify in his other two attempts.

The winged sprint car great is hoping for better Wild West Shootout results in 2016. He knows he’ll have to step up his game with the top-flight competition expected to take part in the six-day meet.

“Anybody who runs Late Models knows how technical they are,” Schatz said. “If you’re only doing it a dozen to 15 times a year, it’s hard to stay up on top of it. But I really enjoy being able to go race with the Late Model, and every time I get in it I learn something different.

“Tucson is gonna be tough, there’s no doubt about that. You’re not going to have any slouch races when you go out there. There’s a lot of great drivers and great names out there and it’s a very tough format, so we’re gonna have to run as hard as we can.”

Interest in the event is high among Super Late Model racers thanks to the purse increases previously announced (five $5,000-to-win features leading into the $11,000-to-win finale on Jan. 17) and the new Keyser’s Quarter-Million Challenge, which gives drivers a shot at a gargantuan $250,000 bonus for sweeping all six races, $100,000 for capturing five of the six features and $50,000 for grabbing four victories. In addition, Black Diamond-Club 29 has posted a $5,000 points fund to be divided among the top-five drivers in the miniseries standings.

More than $170,000 in purses will be distributed to drivers in the three competing divisions over the course of the Wild West Shootout.

Full-week general admission tickets are priced at just $100, giving race fans an opportunity to enjoy all six nights of racing for less than $17 per event. VIP all-access suite tickets (including pit pass) for all six days are available for $240, while single-day tickets are just $20 for the first five programs and $22 for the Wild West Shootout finale on Sun., Jan. 17.

Advanced tickets may be purchased online at www.raceusaraceway.com or by calling the USA Raceway office at 520-664-2074.

Wild West Shootout hotel information can be found at www.raceusaraceway.com or by calling the Courtyard by Marriott at 520-573-0000.

USA Raceway is located east of Tucson, Ariz., off I-10 exit 268, then 1.6 miles south on Craycroft Road, which turns into Los Reales.

For more information contact the track at 520-664-2074 or visit www.raceusaraceway.com.