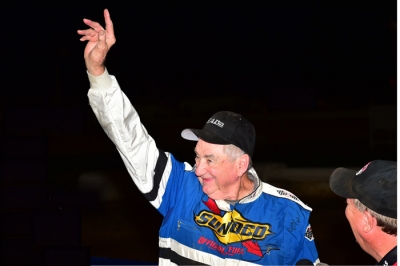 “It’s an honor,” said the 75-year-old from Wheatland, Ind., who revolutionized the Dirt Late Model world three decades ago with his car-construction talents.

But as much as Rayburn relishes the opportunity to see many friends, visit with fans and watch the event’s six nights of racing for Super Late Models, Barnett Harley-Davidson modifieds presented by MVT and Border International and RealTruck.com X-mods presented by Polar Industries, the racer in him sure would like to be part of the competition as well.

“I’d hell of a lot rather take a race car and race out there,” quipped a smiling Rayburn, who enjoyed success behind the wheel of machines from his C.J. Rayburn Race Cars shop after he began racing at the age of 43 and still climbs into the cockpit to make occasional starts. “I can’t keep up with them guys — I’m too old — but I’d really like to have somebody to drive one of our cars out there. I’ve definitely got the right product to race … I think we really have something good with our new cars.”

But Rayburn doesn’t currently have the backing to field a serious house-car program out of the vaunted chassis business he launched in 1980, so he’ll satisfy his racing appetite as a spectator during a mid-winter motorsports extravaganza that features five $5,000-to-win Super Late Model events (Jan. 9, 10, 13, 15, 16) leading into a grand finale on Jan. 17 offering an $11,000 top prize. Wild West Shootout co-promoters Chris Kearns and Kevin Montgomery will also honor Rayburn in front of the crowd, make him available for autographs and bring him to victory lane to meet winners throughout the week.

“I’m looking forward to it,” Rayburn said. “I’ve never been there before (for the Wild West Shootout), but I’ve seen how every year it keeps growing and growing. It seems like a great way to break the winter up.”

Rayburn’s Wild West Shootout duties will also provide him the chance to explore some new territory. He said the only time he’s ever been farther west than Kansas City was when he did a chassis seminar in Portland, Ore. — and in that case, he simply flew in and flew out without seeing any sights.

“I don’t know whether I’m gonna fly out or drive,” Rayburn said. “I’d kind of like to take my motorhome and just wobble out there — you know, take a week getting there, just see things that I’ve never seen before. I’ve never been out west and it sounds like it’s different out there, so I’m excited to get out there and see it.”

Six-day general admission tickets are now available for the Keyser Manufacturing Wild West Shootout presented by Black Diamond-Club 29 Chassis, which is expected to draw many of North America’s best dirt-track drivers. The event’s new Keyser’s Quarter-Million Challenge gives Super Late Model drivers a shot at a gargantuan $250,000 bonus for sweeping all six races, $100,000 for capturing five of the six features and $50,000 for grabbing four victories, while Black Diamond-Club 29 has posted a $5,000 points fund to be divided among the top-five drivers in the mini-series’s final standings.

With the increases in event payoffs previously announced, over $170,000 in purses will be distributed to drivers in the three competing divisions over the course of the Wild West Shootout.

Full-week tickets are priced at just $100, giving race fans an opportunity to enjoy all six nights of racing for less than $17 per event. VIP all-access suite tickets (including pit pass) for all six days are available for $240, while single-day tickets are just $20 for the first five programs and $22 for the Wild West Shootout finale on Sun., Jan. 17.

Advanced tickets may be purchased online at www.raceusaraceway.com/events/10th-annual-wild-west-shootout-2/ or by calling the USA Raceway office at (520) 664-2074.

Wild West Shootout hotel information can be found at www.raceusaraceway.com/fan-info/lodging/ or by calling the Courtyard by Marriott at 520-573-0000.

USA Raceway is located east of Tucson, Ariz., off I-10 exit 268, then 1.6 miles south on Craycroft Road, which turns into Los Reales.

For more information contact the track at 520-664-2074 or visit www.raceusaraceway.com.