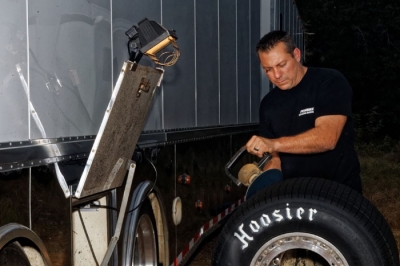 GAFFNEY, S.C. (Oct. 24) — Chris Madden might’ve missed out on the busiest stretch of the racing season from mid-May through late August, but the 40-year-old driver from Gray Court, S.C., has been making up for lost time during a successful autumn. | RaceWire

Since reappearing on Labor Day weekend with a new Longhorn Chassis, Madden has five victories and eight top-five finishes in 10 starts overall. He’s finished first or second in his last seven starts, including a $25,000 victory Oct. 10 at Ponderosa Speedway in Junction City, Ky.

“We just took some time off to regroup and got our brain and everything recalibrated,” Madden said. “We’ve just had a lot of success since we came back. We got some help and we’ve got some good people in their places. I’ve got a guy going with me most of the time all the time now.”

One key addition to the team is Tommy Hicks, a veteran crew chief who worked for many seasons with Hall of Fame driver Scott Bloomquist. Hicks also helped former driver Duayne Hommel to a Southern All Star championship and has spent the past two seasons primarily working with World of Outlaws Late Model Series regular Eric Wells of Hazard, Ky.

“(Hicks) is going to start next season helping us,” Madden said. “It’s a big deal getting some good people in place where we need them and taking some pressure off of me and let me concentrate on the car and driving this thing and winning races.”

Plenty of Cherokee’s long-distance races have seen frontrunning drivers blow tires, but Don O’Neal’s flat on a lap-84 restart wasn’t because of tire wear, the Martinsville, Ind., driver contended. He blamed second-running Chris Madden, who went on to win the race while O’Neal, after pitting for a new tire, rallied to finish second.

“He got into me and busted my left rear,” said O’Neal, making one of his final starts in a Barry Wright house car for the Clint Bowyer Racing team that’s switching to Club 29 Race Cars.

Madden said the contact was simply a racing deal.

“On those restarts, Don was starting at the top of the line and cutting across the whole racetrack in front of us,” Madden said. “(On lap 84 Johnny Pursley) had started and Don hadn’t started, and he was squeezing between us, and Don went to start, and I started, Don came across the nose and we got together.

“It was just hard racing, I did not intentionally hit the guy. Everybody just go back and watch the video and see it for yourself. I don’t have to answer the question.”

Chris Ferguson of Mount Holly, N.C., came to Cherokee looking for his first Blue-Gray 100 victory and his fourth five-figure payday of the season. While Fergy's night got off to a great start — he lowered his track record with a 14.654-second lap at the 4/10-mile oval — circumstances worked against him the rest of the evening.

When he pulled out to start on the front row of the first heat, Ferguson wasn’t able to take the green because of rear-end failure. Teammate Josh Langley loaned Ferguson a rear end, allowing him to start on the tail of the 20-car feature, but Ferguson’s problems still weren’t over.

Although he ended up charging into the top five, Ferguson's engine started missing before the halfway point in the 100-lapper.

“It wasn’t skipping bad enough to pull in, but it was enough to slow us down,” he said. “I could run the top about as good as anybody. I think we had a really good car, but when we had to change rear ends we think the side-to-side was off.

Ferguson gamely tried to continue, but ignition woes on lap 90 finally forced him out with an 11th-place finish.

Ben Watkins of Rock Hill, S.C., had wrapped up the Carolina Clash championship before entering the season finale. He finished fifth in the 100-lapper during a season that saw him become the first champion to also capture Rookie of the Year honors with the series. He completed his first 100-lap race. … Hometown driver Dennis "Rambo" Franklin managed to rally to fourth in the feature, but he had a long way to go after blowing a tire in a heat race. “The tire just exploded,” he said. “That is pretty much how our year has gone.”