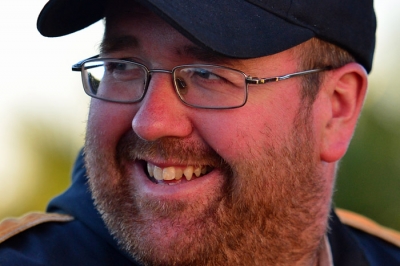 “I just love racing,” the 37-year-old Thompson, Pa., driver said. “Just like Florida, we would have raced 17 nights in a row if it hadn’t been for that one rainout. I was actually disappointed when it was all over Saturday at Volusia. We didn’t come in with many expectations. We were just racing to race and race and race.” | AMS schedule

With the 2015 version of the Appalachian Mountain Speedweek just a few days away, a slightly different format awaits the competitors. No longer is it a full week of racing. Rather, this year, it’s back-to-back weekends.

“I loved the old format,” Stone said. “I’d rather have no nights off because I love racing back-to-back-to-back. This year will be a little different, but it doesn’t really change anything for us.”

Stone admitted, however, that the new format for the miniseries would most likely appeal more to the weekend warriors.

“I actually think the car counts will be better this year because the local guys only have to take one or two days off work instead of a whole week,” he said.

Known for both the quantity of cars it draws and the quality of the competition, the 2015 Appalachian Mountain Speedweek is expected to be no different with Stone, Rick Eckert, Jason Covert and others scheduled to run the entire tour and drivers such as Gregg Satterlee, Tim McCreadie, Jamie Lathroum, and a host of others popping in for at least part of the tour.

That quality of competition is another appealing factor for Stone. Although he’s never been crowned as miniseries champion, he has been close, most notably two years ago when he finished third in the final points tally.

“I probably could have won that one,” he said speaking of the 2013 points chase. “I remember (Rick) Eckert and I were racing for the lead at Port Royal and I could have easily just run second, but I drove it into the corner too hard one time. I was either gonna take him out or spin myself out, so I spun myself out and that basically cost me the title.”

For Stone, the lure of racing so many nights at so many tracks is what he thrives on. But even he is quick to admit that, for a miniseries such as this, expanding too much might not be in the best interest of the series.

“Keeping it at six or seven races is good. If you expand it too much, it’s hard to get the local support. There’s just really no way your average guy around here could go out and run that many races,” he said.

“With this deal, there’s always races and tracks you look forward to but, for me, some of that has changed too. Some of the ones that weren’t my favorites now are because I’ve turned some more laps on them or they’ve got a new surface or whatever.

Regardless of new tracks on the tour (such as the quarter-mile Path Valley Speedway in Spring Run, Pa.) or miniseries stalwarts (such as Bedford and Hagerstown), Stone is ready to race … and race and race and race.

“For the guys who say that, when they race and race and race it just wears on them, I think those are the guys who race professionally and just want a day off work,” Stone said with a laugh. “For me, this is my day off.  This is my hobby. This is what I do.”