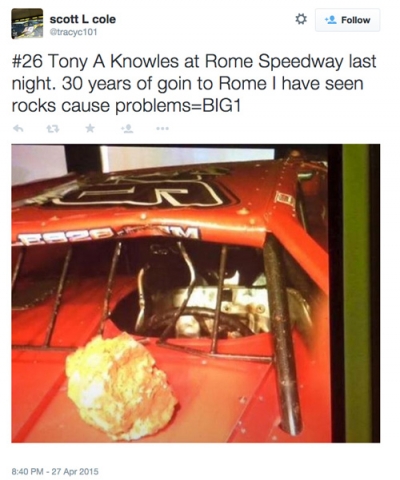 Sunday’s unsanctioned Rome Rumble at Rome (Ga.) Speedway started out as a fairly normal night for Tony Knowles of Tyrone, Ga. While his qualifying lap would have him starting deep in the 26-car starting grid, the 28-year-old driver began working his way through the pack and was running mid-field when disaster struck.

In the closing laps of the $3,000-to-win feature event, a car running ahead of Knowles hit a large rock that was resting in the berm, sending it sailing into his No. 26 machine with a force so great it bent the windshield bars and landed in the cockpit.

“It just got flipped up from the outside berm there, coming off (turn) four,” Knowles said. “It weighed about 18 pounds. It came through the windshield there, bent the steering wheel back and hit me in the head, shoulder and chest and landed on my leg.”

In a race that was later won by Derek Ellis of Chatsworth, Ga., Knowles finished 17th. Despite the large size of the rock that hit his car, Knowles said he walked away with only bruises, with the damage to his car mostly limited to the windshield. However, the turn of events made for a night Knowles won’t soon forget.

“It was definitely a surprise,” Knowles said. “I didn’t realize there were rocks that big on the racetrack. You’d like to think that they would use dirt that didn’t have that kind of rocks in it.” — Alli Collis

The driver of the fan favorite No. 105 station wagon in River Cities Speedway's street stock division is trading in his “grocery getter" for a high octane, dirt-slinging Late Model for the 2015 season at the Grand Forks, N.D., oval.

"I've always been a fan of Late Models and it's been a dream of mine to drive one," said Terry BlackLance of Thief River Falls, Minn. "I'm most excited to be a part of the premier class at River Cities Speedway. The pure power of the car is going to be awesome.”

BlackLance began his racing career in enduro cars when he was 15, then moved up to the hobby stock division at the old Grand Forks Speedway. On May 24, 2002, he claimed his first street stock win. He says he’s more than ready for the transition to the high-powered Late Models.

"I'm 48 years old and not getting any younger. I figured I better do this before I can't get in and out of a car anymore,” BlackLance said. "Honestly, it's about time I join the guys that I used to race with in the super stocks, like Brad (Seng) and Joey (Pederson).”

Another Late Model rookie expected to compete at River Cities and NLRA action is Robert Bladow of Hankinson, N.D., a former pure stock driver. River Cities is scheduled to open its season May 1. — Mike Spieker

Even though the 13-year-old driver did not compete during last weekend’s action, Skinner still leads the standings with 142 points after one victory, two top-five finishes and three top-10 finishes in three events driving the Skinner’s Body Shop CVR.

Skinner has a new challenger in the second spot in 15-year-old Bryant Marsh of Corinth, Miss. Marsh drove the Modern Woodmen Trak-Star to a fifth-place finish Saturday at Whynot Motorsports Park near Meridian, Miss., to moved into second with 136 points. Marsh has two top-five finishes in four starts. Tyler Clem of St. Petersburg, Fla., is third with 135 points.

In two starts at two tracks so far in 2015, Darren Coffell of Bend, Ore., is keeping himself in contention. In his only Super Dirt Late Model start of the season at Willamette Speedway in Lebanon, Ore. on April 18, Coffell posted a third-place finish. The two-time Bud I-5 Series champion and three-time Willamette champion also posted a fifth-place finish April 4 at Cottage Grove Speedway.

“It hasn't been too bad, I mean I really can't complain too much,” Coffell said. “This is a new race car, so it's been a bit of learning process, but I'm pretty pleased with the way things are going.”

“It was nice to have a week off and I'm looking forward to a good result Saturday,” said Coffell, whose Clements Racing Engine-powered Rocket Chassis is sponsored by Driving Force Graphics, Tube Shark Portable Tube Benders and JimsFlagSales.com. “We need to pick up a little bit of speed, but we're getting there.”

For Willamette’s Fight Hunter Night, spectators bringing a can of non-perishable food will receive a $2 discount. — Ben Deatherage

NASCAR Sprint Cup driver Austin Dillon plans to enter his Dirt Late Model in the June 10 Summer Showdown at Merritt Speedway in Lake City, Mich., an event on the first-year American Ethanol Late Model Tour. …  Kevan Cook of Constantia, N.Y., a veteran of IMCA modified racing, is stepping up to the Crate Late Model division at Fulton (N.Y.) Speedway. … Dane Bartle of Bargersville, Ind., has competed at Brownstown (Ind.) Speedway in the Crate Late Model division. He’s the grandson of Fred King of the famous K1NG car driven by Ray Godsey and John Gill, among others.