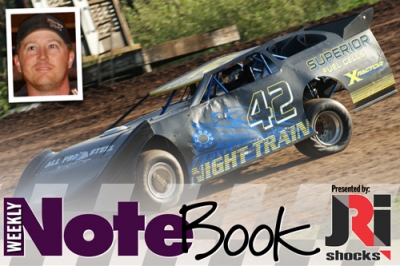 The night of April 4 was one of firsts for Curtis Towns of Cottage Grove, Ore. Making his Super Late Model debut at his hometown Cottage Grove Speedway, the modified standout survived a caution-plagued main event to notch his first career Late Model triumph. Towns has captured two more victories since, putting him atop DirtonDirt.com’s latest Weekly Notebook presented by JRi Shocks. | Weekly results

Towns, 35, got his racing start in the modified division, where he has competed for the last eight years. When Late Model driver Paul Culp of Springfield, Ore., suffered a work injury that would take him out of the car for the 2015 season, he approached Towns to fill his seat. The partnership produced immediate success, with Towns capturing three consecutive victories at Cottage Grove.

“It’s going pretty good,” Towns said. “A guy hurt his back in a work injury and asked me if I wanted to drive his Late Model … I said OK. I’ve never drove a Late Model before and I’m driving for this guy and we’re just off to a real great start. Being a rookie in that class, it’s worked out real good.”

His first Super Late Model victory made for a memorable night for Towns, who bested a tough local field, including Oregon standout Rob Mayea, a multi-time track champion at Willamette Speedway in Lebanon, Ore.

“It was a good field of cars there and I was pretty nervous getting into it my first run,” Towns said. “Things just worked out really good. The car was set up good and somehow ended up in victory lane. It was really surprising … driving someone else’s car, you’re always nervous, you don’t want to wreck it. So it was really good to be able to put someone else’s car in victory lane.”

Until this season, Towns had never seriously considered competing in the Late Model division. But he’s already racked up three victories, adding two victories at Cottage Grove on April 18 and 25.

“It’s just a first-time deal and we’re off to a pretty good start,” Towns said. “We’ll just have to see where it goes from here. Hopefully it continues and things get bigger and better.”

Towns said that his modified background has better prepared him for climbing behind the wheel of a Late Model. The driver was the 2011 modified track champion at Cottage Grove and Oregon's 2013 IMCA champion.

“It definitely gave me some experience,” Towns said. “They’re definitely similar cars. I guess it was just getting used to a lot wider car and a lot bigger front end on it. The size of car is different, but handling-wise they’re probably similar. It’s (Late Model) probably easier to drive.”

While it’s hard for Towns to pinpoint any one reason for his immediate Late Model success, he attributes much of his accomplishments to the guidance of car owner Paul Culp, who has attended the races despite his injury.

“Experience helps,” Towns said. “We’re definitely getting faster and faster the more laps in the car we get. (Paul) Culp had already had the car setup halfway decent for me to start driving it. It definitely helps to have a good car with good equipment and having somebody helping me with the car that has some knowledge in how to set it up also.”

While continuing to compete in the modified division simultaneously, Towns and his Culp-owned race team plan to compete for the 2015 Cottage Grove championship. What lies ahead for the pair past the current race season? That’s left to be determined.

“Hopefully we can win a championship. That’s definitely what I would like to do. Hopefully we can do that and then bring on some other sponsors too, that would help us travel more also. Running two cars gets expensive.

“As long as things continue going good, we both have an agreement to be able to run the whole season. After this season, we’ll see what happens from there. Right now it’s just a week-to-week basis at Cottage Grove. Hopefully we’ll be able to travel … we’re kind of doing one weekend at a time and seeing out it goes.”

• Winning his second straight start, Tad Pospisil of Norfolk, Neb., captured April 24’s NASCAR-sanctioned Late Model opener at I-80 Speedway in Greenwood, Neb. Pospisil rallied from the tail to win his heat and won the feature from outside the third row.

• At Fort Payne (Ala.) Motor Speedway on April 25, Robert Gant of Pisgah, Ala., won his second straight Late Model feature.

• In a rare Super Late Model event at 171 Speedway in Leesville, La., B.J. Robinson of Shreveport, La., raced to a $1,000 victory in a David Peterson-owned entry.

• Eric Breeschoten of Buffalo, Minn., outdueled A.J. Diemel on April 25 at Cedar Lake Speedway for his first victory at the New Richmond, Wis., track since 2007.

• Muskingum County Speedway will reopen June 6 for the first of at least six events in 2015, the track announced. Unsanctioned Super Late Models, modifieds, street stocks and four-cylinders are the expected regular divisions at the Mike Ankrom-promoted 4/10-mile oval in Zanesville, Ohio.

• Talladega Short Track co-owner and promotor Alfred Gurley, known for building the Eastaboga, Ala., oval in 1977, died April 24 after a long illness. He was 82. He and partner Lynn “Preacher” Phillips shared Racing Promoters Monthly Promoters of the Year Award in 2008.

• Oakshade Raceway’s postseason awards will include a chance for Super Late Model drivers with perfect attendance to earn $1,200, the Wauseon, Ohio, track announced. Late Model drivers who compete in every UMP DIRTcar-sanctioned event starting with May 2’s opener will be entered into the drawing for the postseason cash.

• Southern Ohio Speedway co-promoter T.J. Layne has decided to end his partnership with Don Harmon at the Wheelersburg, Ohio, oval, the track announced. Layne, who cited the stress of the job in resigning his promoting role, plans to continue handling the track's public relations and marketing despite selling his share of H&L Motorsports.

• After its WinterFest was halted three times by weather, Winchester (Tenn.) Speedway has forged ahead with May 9’s SpringFest, which includes a $3,000-to-win Super Late Model event along with regular divisions.

• Former Port Royal (Pa.) Speedway promoter Jerry Clark, who championed the Late Model division at the half-mile oval even as sprint cars dominated the region, died Thursday at his home in Mifflintown, Pa. He was 93. The former track and Juniata County Ag Society president, whose son Don currently holds the role, guided the track during the '70s and '80s.

Talladega Short Track, Eastaboga, Ala. (May 1): The first of two nights of action during NASCAR weekend includes a $2,000-to-win event for Super Late Models.

411 Motor Speedway, Seymour, Tenn. (May 2): The track’s Limited Late Models will gun for $1,500-to-win; the track is also debuting a new powerwheel division for children 6-and-under.