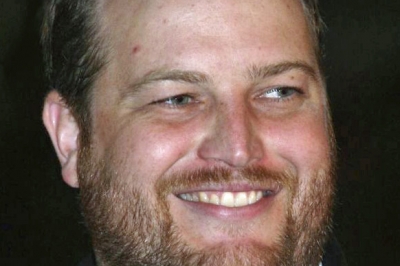 In 2014, the younger Ferree racked up DIRTcar division titles at both PPMS and Lernerville Speedway in Sarver, Pa, claiming four victories at each track on the way. Those championship trophies are the Saxonburg, Pa., racer’s second consecutive at both tracks (he also owns three previous Lernerville championships from 2007-’09).

He’s part of a strong regional contingent these days, but Alex, April 24’s winner at Lernerville, said it took a while to get the hang of the full-fender machines.

Following an early stint in go-karts, the younger Ferree got his first shot at driving a Late Model in August 1996, wheeling one of his dad’s cars at PPMS.

“It was pitiful,” Alex said. “I think I got lapped three times during the race. All I remember is that I was slow.”

The next year saw Alex take on the Limited Late Model division on a regular basis at the Pittsburgh-area track.

“That was a rough year,” he recalled with a chuckle. “I tried knocking the wall down more than anything else.”

Halfway through the ’98 season, Alex broke his foot in a motorcycle accident, giving his two older sisters, Caroline and Catie, the opportunity to finish the season in his car.

“They didn’t do too badly and certainly didn’t wreck it as much as I did,” said Alex, who recalls a time when his dad put two plastic wheels on the right side of the car because he was consistently wrecking into the wall. As luck would have it, in his very next race Alex found the wall once again — but this time on the left side.

“I was just a bum who wanted to race,” he said.

It was an inauspicious start, but after moving up to the Super Late Model class, Ferree finally won his first full-sized feature at Pittsburgh on his 21st birthday.

For the next eight seasons, Ferree experienced more highlights such as winning a $5,000-to-win event at Lernerville in 2005 and finishing fifth in points with the now-defunct MACS Series in 2006.

Despite those achievements, Ferree knew he still needed to be more consistent, and adjust his aggressive style to a more patient approach. According to his crew chief at the time, Freddie Bratchie, Alex had an alter ego during this period.

“He called me Captain Chaos,” Ferree said. “When things weren’t going my way, I had a bad habit of overdriving the race car.

“Now I understand what my dad meant when he said going slower is faster.”

When he expanded his racing endeavors to include Lernerville in 2002, Ferree said, “I stuck my nose where it didn’t belong and would race three wide.”

“A racing move for me was either a hero or a zero move,” he added.

Another major influence on Alex’s career, beside his father, who started racing in 1981 and has racked up more 300 features on dirt and asphalt, was the late Dave Hoffman. Known as the Butler Bullitt, Hoffman amassed 299 features and seven track titles (including four at Lernerville) prior to his death in 2012 from a massive heart attack.

“Alex really respected and appreciated what Dave had to say to him,” Ed Ferree recalled. “When he died, it really hit him hard. (Dave) would sit in turn one and study Alex’s car and driving and then tell him on Monday morning what he did wrong and what he needed to do differently.”

Hoffman, who worked for Ed Ferree, became a mentor of sorts for the younger Ferree.

“I would listen and absorb it from him,” Alex said. “Dad was probably telling me the same thing, but I wouldn’t listen.”

In 2013, Alex won the Dave Hoffman Memorial at Lernerville. Prior to the race, Hoffman’s son, Bobby, took Alex’s No. 10 Late Model around the track for two laps and was checker-flagged by his sister Saundi, symbolizing Hoffman’s 300th career victory.

“That was probably bigger for me than winning any of my point championships,” Alex said.

The younger Ferree’s career really got rolling in 2007, the year he won his first Lernerville track championship. In his first six races that season, he garnered five wins and a runner-up showing. Hitting the road a bit in the region, he won back-to-back UFO Race Championship Series titles in 2007 and ’08.

The elder Ferree is a successful businessman with numerous interests on which to keep tabs. He is president of Pulva Corporation, a company that builds high speed pulverizing equipment, whose client list includes Hershey Candies.

“All of the cocoa beans that get turned into chocolate bars go through one of our machines,” Ed said.

Former NASCAR and Late Model star Rodney Combs is a partner in ADC. Alex makes decals for ADC’s Red Series as well as other graphic work.

His father’s various successes — on the track and in business — helped lay the groundwork for Alex, who has driven for car owner Joe Corrado of Butler, Pa., since 2011.

“This equipment might be the best I’ve ever had,” Alex said. “But don’t get me wrong, my dad’s stuff was really good, too.”

Along with crew chief Todd Sabish, Ferree and Corrado collaborate on setups for their orange-and-white Rocket chassis on race night.

Corrado, a former driver who ended his racing career in 1989, initially handled all the maintenance work, leaving the setups for Sabish and Ferree.

“Things had changed so much since he had raced that he admitted he wasn’t ready to take over the setups,” Ferree said.

The team is a joint effort as Corrado is at the race shop every day, while the Ferrees supply the transport truck and trailer.

In 2013, the team clicked off a dozen feature wins en route to their Lernerville and Pittsburgh track titles. Their efforts were also good enough to claim the UMP DIRTcar East Region championship.

The younger Ferree still likes racing his against his father, who has returned to action in recent years after dealing with various health issues.

“I enjoy racing against him more than I do watching him,” Alex said. “It’s a challenge between us because we want to beat each other. He’ll probably say that it’s not, but it is.”

Ed only races on occasion, and when he doesn’t he watches his son.

“I enjoy watching Alex race,” Ed said. “And I do enjoy going down there and doing it myself at times.

“When I first started back a few years ago, I thought it would be neat for Alex and me to finish first and second.”

Last June, that particular wish came true as they finished one-two at PPMS — with Ed in the winner’s circle.

Surrounded by tough regional competitors such as John Garvin Jr., Mike Pegher Jr., Rob and Max Blair, Michael Norris and Russ King, Alex said one of his favorites to go wheel-to-wheel with is Jared Miley.

“We run door-to-door a lot; it’s clean and it’s fun,” he explained. “I like winning clean or getting beat clean. I think a lot of guys race me that way.”

In addition, he looks up to the drivers in his area who have put in their time on the road, including Gregg Satterlee and Chub Frank, a former World 100 and Dirt Track World Championship winner.

“They are the traveling guys, and that’s where I would like to be eventually,” he said. “I would like to get to that — do some traveling, hit some big shows, and go up against guys who do it for a living. You have to improve your performance to compete at that level.

“I want to become known for more than just being one of the top local drivers.”

“I would like to get to that — do some traveling, hit some big shows, and go up against guys who do it for a living. You have to improve your performance to compete at that level.”