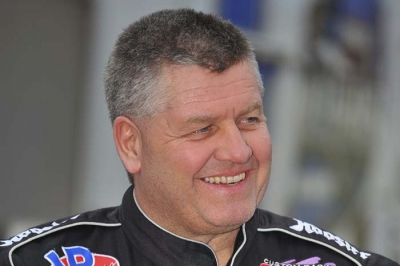 Knee surgery in February hasn't slowed down Chub Frank. The 53-year-old World of Outlaws Late Model Series veteran underwent a knee replacement operation on his left knee on Feb. 23 and has been solid in the three races since returning to the seat of his No. 1* Longhorn Chassis.

After finishes of sixth and seventh in April 17-18 series action at Farmer City (Ill.) Raceway and a seventh-place finish at Tazewell (Tenn.) Speedway on April 11, the Bear Lake, Pa., driver is third in WoO standings with eight top 10s in 10 races on the season.

Frank's recent performance is even more remarkable considering he's not fully recovered from his surgery.

"It's actually not bending quite as far as it should even doing therapy and stuff," Frank said. "They told me to do normal stuff and it'll fix itself, so I'm racing. It's a little sore, but I just put it on ice and exercise it like they say to. I'll keep doing that till we get past it.”

Luckily for Frank, the lingering soreness isn't a problem when he's in his race car.

"I don't really feel it until I get out," Frank said. "Maybe if it was a long yellow or if we had to sit under red or something I would start to feel it. But racing, no, I never notice it until after I get out of the car and it's a little sore.”

At home in Illinois

Tim McCreadie is beginning to find himself right at home in the Land of Lincoln. McCreadie of Watertown, N.Y., who last season scored a $25,000 victory at nearby Fairbury (Ill.) American Legion Speedway, was perhaps the best he's been all season at Farmer City.

Scoring his first back-to-back top-10 finishes of the year, McCreadie battled among the leaders and finished third in Friday's 25-lap opener and advanced from 24th to ninth in Saturday's 75-lap finale.

"They're a little bit like New York — big cushion, slick in the middle and bite on the bottom," McCreadie said in comparing Illinois bullrings like Farmer City and Fairbury to his beloved Empire State ovals. "In my opinion, that's always the best kind of track because it enables the driver to do things.

"You don't get bottled up in one lane; you can move around and drive a little harder and make some time up. It's hard to do that nowadays with the way these cars are built and the way the tire rules are. It's hard to just physically manhandle stuff, so it's nice to come to places like this where you can put more gear in it and just push the throttle harder to go faster."

With daytime temperatures creeping well into the 70s at Farmer City, WoO Rookie of the Year contender Jordan Yaggy of Rochester, Minn., couldn't help but notice how much the doubleheader weekend reminded him of the tour's trip to Florida earlier in the season.

"You really couldn't ask for better weather," the 23-year-old Yaggy remarked while going through event registration and pill draw Saturday afternoon at Farmer City. "I walked out this morning and thought I was in Florida."

As Yaggy also noticed, the Illini 100 entry list was also similar to a Florida event at Volusia Speedway Park, which like Farmer City, attracted nearly 50 entries for its weeklong DIRTcar Nationals.

"It's kind of like Florida weather and Florida competition," Yaggy said, noting that the Illini's mix of WoO regulars, other national travelers and regional standouts was one of the best fields he's raced against. "We knew it was going to be tough coming to race these Illinois guys, then you throw in the extra touring guys and it's a really tough field.

"That's part of what makes it fun. We're trying not to get down. This is only our second year in Super Late Model and first year out on the road like this, so we're just having fun and learning."

Yaggy has had his trials in his first year of national traveling, and Farmer City was no different. But the former WISSOTA Late Model driver is remaining positive as he aims to continue his learning process.

"It's kind of been everything I expected," said Yaggy, who finished 25th twice at Farmer City. "We had some good nights, a couple of top 10s down in Florida, then we've had some nights that have been a struggle.

"Everybody told me that being a rookie I was gonna take my lumps and bumps. We definitely have been, but we're not gonna quit."

Like Yaggy, fellow WoO rookie contender Brandon Overton of Evans, Ga., has had his struggles during his first stab at full-time WoO competition. But the 24-year-old racer got a chance to shine Saturday at Farmer City.

After qualifying second fastest, Overton outdueled Bobby Pierce of Oakwood, Ill., to win his heat race and ran among the top 10 for much of the 75-lapper. He faded late in the race and ended up 15th at the finish, but Overton was pleased with the experience he gained in his first visit to Farmer City.

"It's a different animal than what I'm used to racing on," said Overton, who opened the WoO season with back-to-back top-three finishes when the tour visited his home region for a pair of events at Screven Motor Speedway in Sylvania, Ga. "But I stayed out there and ran the whole race and we learned a lot. I think it'll help us down the road and it felt good to run up front for a little bit."

Like most first-time travelers, Overton has found it difficult to adjust to tracks he's unfamiliar with, especially on nights when there isn't much time for practice.

"It's tough because you unload and all you get is a green, a white and a checkered (in hot laps)," Overton said. "Then you better be good in qualifying or you're in for a long night.

"Every racetrack you go to is so different. Even if they look the same, they're still so different. That's what we've gotta get used to: how to adjust to tracks we've never been to."

The good news for Overton is he has four races in a row coming up at tracks where he has considerable experience, beginning with the May 1 WoO visit to Friendship Motor Speedway in Elkin, N.C. The 4/10-mile, which welcomes the WoO for the first time ever, was the site of one of Overton's biggest Super Late Model victories on the Carolina Clash tour last season.

"Now we're headed back to my house," Overton said. "I can't wait to get to some tracks I know so I can maybe build a little bit of confidence. I guess we could go to those tracks and not be any good, but I think we'll be OK. I'm much more comfortable when we're running those tracks around home.”

Next up for World of Outlaws

WoO competitors return to action with a May 1-2 doubleheader in North Carolina with $10,000-to-win events at Friendship Motor Speedway in Elkin and Fayetteville Motor Speedway.