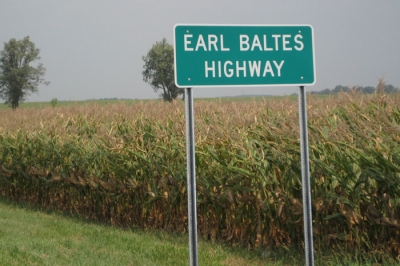 A timeline of Earl Baltes, the legendary founder of Eldora Speedway in Rossburg, Ohio, who died Monday (more on Baltes):

1952: Purchased Ma Shoes, renaming the dance hall the Eldora Ballroom after finding an old wooden name in the back of the building with “Eldora” written on it (according to the Dayton Daily News, it was the name of a dance hall in Germany of the former owner).

1954: Built Eldora Speedway in natural amphitheatre that separated the ballroom and the Wabash River.

1958: Expanded Eldora to a full half-mile oval with his high-banked configuration.

1984: Honored as USAC Race Organizer of the Year.

1993: Baltes is named RPM Promoter of the Year.

1994: Baltes is inducted into the fifth class of the National Sprint Car Hall of Fame in Knoxville, Iowa.

1997: Honored as USAC Race Organizer of the Year.

Oct. 6, 2000: The Eldora Million is postponed by inclement weather and wet grounds.

Aug. 11, 2001: Baltes is among inaugural inductees for the National Dirt Late Model Hall of Fame at Florence Speedway in Union, Ky.

Nov. 18, 2004: The sale of Eldora becomes officials as Baltes turns over the keys to new owner Tony Stewart.

June 7, 2008: A life-size, bronze statue of Earl and Berneice Baltes is unveiled at Eldora, depicting them with their hands waving to the crowd. "I never thought I'd see a day like this or a night like this," Baltes said. "You're the greatest big bunch of fans in the whole world right here."