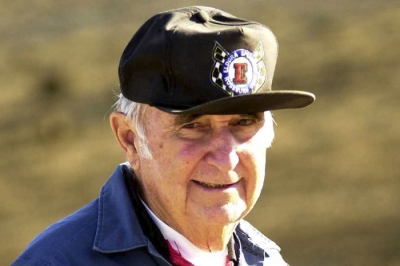 His name was Earl, but when it came to short-track race promotions, he was definitely the King.

Operating Eldora Speedway for 50 years along with his wife Berneice, Baltes presided over some of dirt racing’s biggest events, including fixtures on the annual Late Model schedule with the prestigious World 100 and $100,000-to-win Dream. The Eldora Million in 2001, with Ohio driver Donnie Moran pocketing $1 million, was the richest dirt race in history.

Always wearing his cap with a flipped-up bill, Baltes was known to drivers as a no-nonsense promoter while embraced by fans as a likable grandfather figure, with spectators flocking to him for photos, especially since the 2004 sale of Eldora to NASCAR star Tony Stewart.

Besides being the site of World 100s won multiple times by Late Model stars such as Billy Moyer, Scott Bloomquist and Moran, Eldora hosted some of the sport’s biggest open-wheel events with legends such as Stewart, Jeff Gordon, A.J. Foyt, Johnny Rutherford among drivers turning laps at the track named after the nearby ballroom.

“Earl Baltes was the yardstick other track promoters measured themselves by,” Stewart said in a statement. “He constantly raised the bar, and he did it by creating events everyone else was afraid to promote. He did them himself, too. Not as a fair board or a public company, or with major sponsors or millions of dollars in TV money.

“He put it all on the line with the support of his family. He and his wife, Berneice, created a happening at Eldora. They turned Eldora into more than just a racetrack. They made it a place to be. They were integral to the evolution of dirt track racing and the sport as a whole. Earl will be missed, but he won’t ever be forgotten because of his devotion to auto racing.”

When Baltes announced his retirement and the sale of the track to Stewart at the 2004 World 100, the jam-packed grandstands at Eldora, brought to deafening roars during the biggest races, was completely silent.

"We want to thank so many of you wonderful people that supported Eldora," Baltes told the fans. "I can't begin to tell you how much we think of you people. You are the greatest race fans.”

Born in Versailles, Ohio, on April 27, 1921, he served in the U.S. Army during World War II. Before his career as a race promoter, Baltes was in the music business, forming the Melody Makers, a 16-pierce band that rose to national prominence before World War II. In the late 1940s, Baltes built the Crystal Ballroom near Versailles while continuing to perform.

Baltes later purchased Ma Shoes, a dance hall just north of Rossburg that would become the existing Eldora Ballroom, but soon caught the racing bug after attending a race in New Bremen, Ohio. He decided to build Eldora Speedway in the natural amphitheater that separated the dance hall and the Wabash River.

The track was originally built as a quarter-mile oval before being shaped its popular high-banked, half-mile configuration in 1958. It evolved into one of the most significant tracks in the United States with not only stock car racing but open-wheel events for USAC and World of Outlaws sprint cars at events including the Kings Royal and Four Crown Nationals.

Races at Eldora were shown on ABC’s “Wide World of Sports” with Keith Jackson and Al Michaels  calling the action and other networks including ESPN, CBS and TNN also televised events that helped put Eldora on the map.

The track, nestled in rural west-central Ohio off Route 118, grew to a seating capacity of more than 20,000 as Baltes used a variety of promotions along with adding lucrative racing events.

he hosted three sprint car races in the 1960s that featured 33 cars and were 500 laps. He ran a season-long promotion featuring a series of skits with a family of randomly appearing apes eventually married in a ceremony presided over by legendary driver Duane “Pancho” Carter.

All the while, Baltes cracked jokes and shared stories with drivers and fans alike, and if anyone asked about the success of the track, he always twinkled his eyes with a quick retort : “If we could sell just one more hot dog, we’d break even.”

In 1971 Baltes shocked the racing fraternity when he held the inaugural World 100, offering an unprecedented purse of $4,000-to-win. Bruce Gould of Milford, Ohio, ultimately won the event, widely considered to be the birth of the modern Dirt Late Model.

The state of Ohio named Route 118 Earl Baltes Highway, the two-lane road that stretches past Eldora Speedway from Ansonia to the south to St. Henry to the north.

Baltes is also memorialized along with his wife with a life-size bronze statue of the track founders at the entrance of the track, a gift presented by Stewart in 2008.

Baltes is survived by Berneice, his wife of 67 years, daughter Starr and husband Joe Schmitmeyer, son Terry and wife Dee, sister Susie Barga along with six grandchildren and 12 great-grandchildren.

Visitation is 2-8 p.m. Friday, March 27, at the Oliver-Floyd Funeral Home in Greeneville, Ohio. Funeral services are 10:30 a.m. Saturday, March 28, at St. Bernard Catholic Church in Burkettsville, Ohio. In lieu of flowers, the Baltes family requests that memorial contributions be given to the American Heart Association.