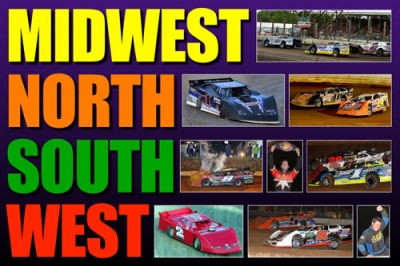 With the national tours getting their wheels on the ground during Georgia-Florida Speedweeks, the regional Dirt Late Model series, as the weather allows, are starting to crank up. A few get rolling this weekend while others have debuts coming up in the second half of March. DirtonDirt.com checks in with virtually every series throughout the country to see who's traveling to new tracks, who's instituting new rules and who's making changes with purses. Check out complete capsules for each series for the North, South, Midwest and West with these links, and get a preview below of regional highlights:

Co-sanctioned events make up much of the Iowa-based Corn Belt Clash Late Model Series slate, but Davenport (Iowa) Speedway’s season-ending Governor’s Cup is CBC only with events on the quarter- and half-mile of the Mississippi Valley Fairgrounds. … IMCA’s Deery Brothers Summer Series balances its schedule with more western and central Iowa events as it continues its march toward its 500th tour event. … The Lucas Oil Midwest LateModel Racing Association trends toward Iowa with seven races in the Hawkeye State, including first-time events at Farley and West Liberty paying $10,000-to-win. … The Missouri-based MARS DIRTcar Series has a series-high 36 races on tap at nine states as Tony Jackson Jr. chases a third straight title. … The Northern LateModel Racing Association continues to buoy the upper Midwest as Brad Seng looks to become NLRA’s all-time winningest driver. … The Sunoco American Late Model Series reunites after splitting into Western and Eastern divisions, but some dates conflict with the tour keeping a presence in Illinois and Ohio. … Nebraska’s Super Late Model Racing Series boosts purses thanks to Malvern Bank sponsorship. … The UMP DIRTcar Summernationals trims its schedule back to five weeks. … The WISSOTA Challenge Series loses title sponsorship but kicks off with an impressive South Dakota tripleheader.

The Appalachian Mountain Speedweek settles into a two-weekend schedule. … The track-coordinated UFO Race Championship Series is revived in Pennsylvania after being dormant in recent seasons. … The United Late Model Series is also back for its first full season since 2013 with three events at Stateline Speedway and its first-ever race at Thunder Mountain Speedway. … The Three State Flyers and Steel Block Bandits fold, while the Maryland-Virginia Chase for the Championship and Buckeye Late Model Dirt Week come to life.

With Championship Dirt Motorsports no longer around and the Pacific Northwest still without a tour, the West Coast Late Model Shootout soldiers on with events in California, Nevada and Arizona. … The Colorado Alliance Late Model Tour steps up to replace CDM, expanding to 16 events.