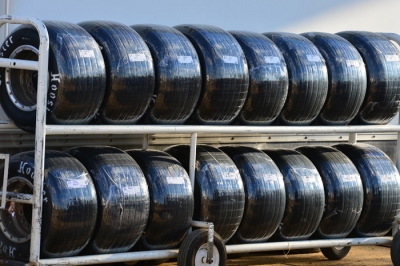 In early February, Darrell Lanigan and his Union, Ky.-based race team will make the annual journey to the warmer climes of Georgia and Florida, where the World of Outlaws Late Model Series will launch its 2015 season with seven races at three racetracks from Feb. 6-21. Lanigan, who claimed his third career WoO championship in 2014, will likely also compete in four DIRTcar-sanctioned events during that stretch for a total of 11 races.

Along with two Club 29 Race Cars and nearly enough spare parts to build a third car, Lanigan plans to haul between 60 and 70 tires for his annual February trek. That’s a lot of rubber, but Lanigan knows it could be much more.

"It's a lot of tires," said Lanigan, who has been a WoO regular since the national tour was relaunched in 2004. "But it wasn't too long ago that we'd be taking twice as many down there.”

In recent seasons, WoO officials have scaled down its open-tire rule at all series races, implementing a flexible tire rule that limits competitors to options of typically three or four compounds that fit each racetrack.

For example, at the season-opening Winter Freeze Feb. 6-7 at Screven Motorsports Complex in Sylvania, Ga., competitors will be allowed to run Hoosier compounds 1300, 1350, and 1450 or American Racer compounds 44, 48 and 53 (with the Hoosier 1450 and the American Racer 53 being allowed as right-rear tire options only).

The Late Model Winter Nationals at Bubba Raceway Park in Ocala, Fla., Feb. 13-15 and the DIRTcar Nationals at Volusia Speedway Park in Barberville, Fla., Feb. 16-21 will both allow only Hoosier compounds LM 20, 30 and 40. (More tire rule information for the February events can be found at woolms.com).

The difference between a three-compound tire rule and an open-tire rule is significant for race teams, cutting the required tire inventory by as much as half, according to Lanigan. That means if 60 to 70 tires for 11 races seems substantial, imagine needing upwards of 120 for the same stretch. While many of those 120 tires may go unused on the trip, just having them on hand increases a team's tire bill, adds extra work for crew members and creates space issues inside a team's hauler.

“Back when it was open (tire rule) at Screven and Volusia, we'd take probably an easy 120 tires or something like that between two tracks," said Lanigan, who had a WoO-record 17 victories in 2014. "Now, you can probably go with 60 or 70 and make it through all three weeks. You just can't imagine how much of a difference that makes. I like (the tire rule) and I know my (crew) guys like it.”

While the WoO has instituted tire rules for its February events for a number of years, the tour only in the past two seasons implemented that policy for all of its other events.

That policy, which will continue in use for the 2015 WoO season, has been met with positive feedback from many drivers and teams. Series regulars have reported drastic reductions in tire inventory, while non-regulars benefit from not having to purchase extra tires or to compete in occasional WoO events.

"As much as it takes to run up and down the road and follow a national series, it's huge for us if you can cut the tire cost down," said Morgan Bagley, the Longview, Texas, driver who finished fourth in WoO standings last season. "I think it saves you money and helps make it more feasible for us to be able to travel all over the country.”

Mike Marlar is one of the many fans of the WoO tire rule. Though not a series regular, the veteran Winfield, Tenn., driver enters WoO frequently thanks in part to the tire rule.

"With open tires it's really disheartening when you have to spend all that money just to go to one race," said Marlar, who last season broke through for his first career WoO victory at Tazewell (Tenn.) Speedway. "There's a lot of guys you talk to and ask them if they're going to a race when a series comes to town and they basically decide not to because they don't wanna have to buy all them tires. You hate to see that happen, so anytime you can simplify it (by limiting the number of tire options), I just think it's better all the way across the board.

"It used to be that the guys that had a 28-foot trailer just about couldn't run a Outlaw race because he didn't have room to haul the tires you might end up needing. Now, for one or two races with the Outlaws, you can usually get by without having to get many more tires than you would for any other race you might go to. From that standpoint alone, it's a big help."

As Marlar indicated, the tire rule leads to more regional and local drivers trying their hand at series events. Many of those local and regional competitors often perform well against the WoO traveling stars with a handful of drivers scoring upset or surprise victories in recent seasons.

Casey Roberts of Toccoa, Ga., is among the standout regional competitors to find WoO success. A veteran among the bullrings of the Southeast, Roberts believes a restrictive tire rule allows smaller teams like his to be more competitive in WoO events. He proved as much during the 2014 DIRTcar Nationals at Volusia by outdueling National Dirt Late Model Hall of Fame member and former WoO champion Scott Bloomquist for his first WoO victory.

"Open tires are just brutal especially when you don't have two or three hired hands to help," Roberts said. "You need one guy that basically does just tires. That makes it tough on guys like me that don't do it for a living and don't have any full-time help. Most guys that do this are like me and don't have a whole lot of help either, so I think keeping it to a three- or four-tire rule is definitely a plus for the majority of us.

"If it's (an) open tire rule, you're at a race wondering which tire to go with. When you don't have very much help, that just takes away from time I need to be working on the car and making it faster. So in a way, it helps level out the playing field for guys like me."

One concern in limiting the number of tire options is how the lack of softer-compound tires might affect on-track action. Softer tire compounds typically give race cars more traction, allowing, in theory, for cars to steer better so drivers can run different grooves on the track. But Lanigan believes that any difference between racing with softer compounds is minimal.

"I think the racing is still just as good," Lanigan said. "With the (Hoosier soft compounds) 1100s and 1200s, when it's wet out maybe it's a little better racing, but I don't think it's really worth it for the little bit of a difference. I think the 1300 (compound) is the best all-around tire and the racing is just as good."

Along with still allowing for side-by-side racing, having three or four tire options also still creates tire choice drama. Like with an open tire rule, WoO can often be decided based on which driver and crew make the best tire choice. Teams starting mid-pack or near the tail often gamble on a softer tire choice hoping it will help them march to the front. Those gambles sometimes pay off, producing thrilling races and surprise winners.

"It's a decision even if you only have two options," Marlar said. "There's still plenty of room to mess up. On top of that, you still have to have it grooved right and siped right. There's still a great deal of knowledge that goes into being competitive and being able to win at that level. The more simple you make it, the easier it is to make the right choice, but it's still easy to get it wrong."

While the restrictive tire rule still allows for some tire options, limiting teams to three or four choices makes tire decisions easier, which can be a big benefit for less experienced teams and drivers. Bagley is among the drivers that have taken advantage of fewer tire options to quickly become competitive on the tour. The 2013 Rookie of the Year runner-up logged one of the best sophomore seasons in series history in 2014, becoming just the second driver to finish among the top five in the championship chase during his second year on tour.

"A tire rule isn't going to slow the veterans down any, but it definitely helps the newcomers to help eliminate some bad decisions," said Bagley, who scored a pair of runner-up finishes on his way to a fourth-place points finish in 2014. "Tires will make you or break you. You can take a decent car and put the right tire on and be in the front. But you can take the best car out there and put on the wrong tires and go straight to the back.

"For people just coming into this deal, narrowing down the tires definitely helps to keep you from making the wrong decision. It's more of a level playing field because you're taking away a little bit of the notebook from those experienced guys."

Bagley is also a proponent of a stricter tire rules because it limits the number of tires his team carries. With their home base in Texas, Bagley sometimes goes weeks between trips home to restock. That means he often leaves the shop with nearly all the tires they may need for more than a month's worth of racing.

"Where we're from, not being able to go back to the shop for a month or two sometimes, it's so hard to carry all the tires that we need," Bagley said. "With a tire rule, it really helps cut down the amount of tires we have to carry. When you race with an open tire rule, you can go race one night and have to take 60 or 70 tires because there's so many different options that you might need. With a tire rule, we still might haul around 40 tires with us to a race, but that's still a huge difference."

While having extra space in the hauler is a nice product of having a tire rule, the biggest benefit to teams — from the series regulars to the weekly competitors who only enter one WoO event a season — is the reduction in costs. Tire bills may still dominate a race team's budget, but as Bagley points out, every little bit saved helps.

“It used to be that the guys that had a 28-foot trailer just about couldn't run a Outlaw race because he didn't have room to haul the tires you might end up needing.”