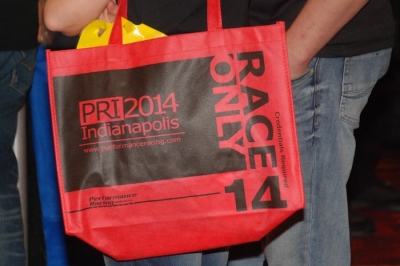 A complimentary bag at PRI. (DirtonDirt.com)

Carolina Speedway in Gastonia, N.C., is undergoing some changes over the off-season. Promoter Clint Elkins said that 200 loads of red clay are being added to the racetrack that is being widened by 45 feet. Along with the track’s reconfiguration,1,000 seats are being added the the speedway’s grandstands.

The racetrack has several big events planned for next season, with the 15th annual Skyler Trull Memorial set for March 6-7. Carolina Speedway will also host its 44th annual Shrine 100 in August, with the third annual King of the Carolina’s slated for October.

It was announced during Saturday’s PRI Trade Show that Keyser Manufacturing will be the title sponsor for the ninth annual Wild West Shootout at USA Raceway in Tucson, Ariz.

The funds contributed by the title sponsor will be dispersed amongst drivers competing in the Jan. 10-18 six-race miniseries in some form or fashion, Kearns said.

“We always want to give back and anytime you get a chance to give money to the racers, especially when a lot of them are traveling long distances to get out there,” Anna Walker of Keyser Manufacturing, said. "It entices them to come because there’s that added bonus that there’s going to be payback.

“We’re excited to get some more exposure in the Western United States, to kind of get the Keyser brand in front of those guys a little bit better. The event’s growing every year and we want to be a part of it and help it continue to grow and get bigger and attract more racers across the United States.”

After a quiet 2014 season, Jared Hawkins of Fairmont, W.Va., is hoping to race a little more frequently next year. Entering just 16 events in 2014, the driver captured three victories on the season.

“We’re going to try to do a little more,” Hawkins said. "We’ve been busy with work — my brother and I took over my dad’s towing company, so we’ve been trying to get that started. We’ve got some more help now, so we should be able to race a little more.”

Hawkins may kick off 2015 in Florida behind the wheel of a modified, but likely won’t get his first Late Model start until sometime in April.

“I just plan on running regionally around the house with the Late Model and hopefully driving a modified for some different people and a Crate car,” Hawkins said. "Just race when we can and where we can.”

Dennis “Rambo” Franklin of Gaffney, S.C., capped off his 2014 season with 11 victories and the Ultimate Late Model Super Series championship. He fell just short of earning a second title on the year on the Carolina Clash Super Late Model Series.

“We had a real good year,” Franklin said. "We wanted to win both championships, but we got in a little trouble there that one time and just didn’t get it done. But other than that we had a real good season.”

Franklin was among the lengthy list of drivers making the switch to Longhorn Chassis this year. He’s planning a to run regional schedule again in 2015.

After a six-victory 2014 season, Keith Jackson of Odenton, Md., is looking to step it up next year. Partnering with car owner Ernie Davis of Martinsburg, W.Va., Jackson is planning a busy 2015 schedule.

“Ernie Davis called us just a little bit before Charlotte and really wanted to get involved with us and decided to buy us a car,” Jackson said while visiting the Willy’s Carburetor and Dyno Shop booth. "I think we’re going to move around a little bit more next year. We only got to race 18 races this year … try to stretch it to 30 or 40 races, try to hit some of the big races like maybe the Firecracker, maybe try to get out to Eldora.”

“We’ve got a really good deal going on next year and I’m really excited,” Jackson said. "We’re always continuing to make ourselves a little bit better. Last year we never got enough time to test, so I think at the end of the year when we got everything together it really showed how good of a team we are and I think we can just really build on that.”

Cherokee Speedway in Gaffney, S.C., is gearing up for 2015, with the annual March Madness event set for Feb. 28-March 1. Saturday’s program will be $3,000-to-win, with Sunday’s Southern All Stars-sanctioned event paying $10,000 to the winner.

The Lucas Oil Late Model Dirt Series will travel to the speedway on June 19 for the Grassy Smith Memorial, with the Carolina Clash Super Late Model Series-sanctioned Blue-Gray 100 on the slate for October.

“I think we’ve got a really good year lined up," promoter Lennie Bluff said. “Last year we had to focus a lot on fixing our dirt because we did some different things with our dirt and had to work on a lot of surface. This year we’re going to focus on maintenance and trying to dress the place up a little bit more."

Devin Moran of Dresden, Ohio, got a late start to this year’s PRI Trade Show. The 20-year-old had to finish up a couple things at home before making the trip to Indianapolis and is taking in the 27th annual event over a two-day span.

“I actually had a final (exam) Thursday night at 5 o’clock, so me and my dad and my two younger brothers got up at like 4:30 or 5 yesterday morning and drove here,”  Moran said as he talked with his dad Donnie and brothers Wylie and Tristin at the AR Bodies booth. "We were here all day yesterday and we’ll be here most of the day today.”

Moran’s strategy for the trade show is the same as most drivers. He and his crew looking for the best deals, while connecting with all of his current sponsors.

“We’re just trying to wheel and deal a little bit and solidify our deals that we had last year, and I mean obviously try to work in a couple new ones. You can’t expect too much coming here just because it’s such a big place and there’s so much going on. But the more you can do, the better you are.”

The second-generation driver finished the 2014 season with 18 victories. He’ll make his first start of 2015 at Golden Isles Speedway in Brunswick, Ga., on Feb. 5. Moran has one goal for next season — besting his dad’s single-season record.

“My dad told me at the end of the season, me and my little brother Wylie were talking about how awesome of a season we had, and my dad said one year he won 26 races,” Moran said. "So our goal for next year is 27. It’s kind of a stout goal, but you never know what’s going to happen.”

The 2015 season is going to be a busy one for Smoky Mountain Speedway in Maryville, Tenn. The racetrack’s schedule boasts a total of 14 events, including 10 Super Late Model shows that will kick off on March 13-14 with the Old Man’s Garage Spring Nationals-sanctioned Tennessee Tipoff.

“We’ve taken it bigger than we have before,” Smoky Mountain promoter Casey Moses said. "We’ve always been a supporter of Ray’s (Cook) events. But next year we’re doing a $10,000-to-win and a $5,000-to-win. We’re really excited about that. We’ve never done a big event like that with him.”

Along with the Spring Nationals events, the racetrack will welcome the Lucas Oil Late Model Dirt Series back for another year with a $10,000-to-win event set for June 20. The World of Outlaws will travel to Smoky Mountain on May 9, with a Carolina Clash Super Late Model Series event scheduled for August. Limited and Crate Late Model specials are also included in the track’s 2015 schedule.

“We’re trying to open it up with those guys as well as Supers,” Moses said. "We’re looking forward to opening up here it a few months. It’ll be here before you know it."