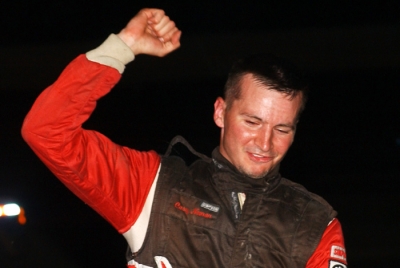 WAUSEON, Ohio (June 14) — Starting ninth at Oakshade Raceway, Casey Noonan picked his way through the field and captured the 19th annual Barney Oldfield Memorial to earn a career-high $4,400 in just his fourth career feature victory. "We won at Eldora and that was big," the Sylvania, Ohio, driver said, "but winning on my home track where all my family and fans are, it’s just indescribable.” | Slideshow

Rusty Schlenk of Jackson, Mich., who started fifth in the 20-car field, was second in the 40-lapper at the 3/8-mile oval in northern Ohio. Kevin Reeve of Hanover, Mich., was third followed by Ohio drivers Ronnie Perrine Jr. of Lima and Dusty Moore of Swanton. Polesitter Mike Bores of Bellevue, Ohio, was 15th in the independent UMP DIRTcar-sanctioned event.

Noonan avoided an early calamity on a double-wide restart that knocked a few frontrunners from contention, then deftly handled lapped traffic late in the race for the victory. The event drew 39 cars.