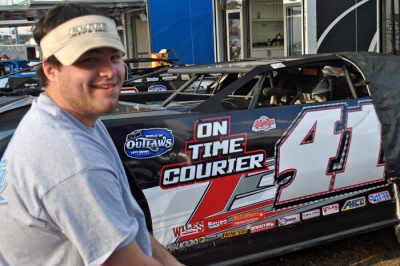 Brandon Overton in front of the Rattliff Racing car. (DirtonDirt.com)

CONCORD, N.C. (Nov. 6) — Brandon Overton’s racing fortunes went from nothing to something so quickly over the past week, maybe it was only natural he would experience another dramatic course correction. | Complete World Finals coverage

It came on Thursday night at The Dirt Track at Charlotte, where the rising 23-year-old driver from Appling, Ga., saw his pick-up ride in a Justin Rattliff Racing car — a deal he landed shortly after news broke on Oct. 30 that he had split with team owner Troy Baird — short-circuited before it really even got started. A blown engine during hot laps not only sidelined Overton for the evening’s two rounds of Bad Boys Buggies World of Outlaws World Finals qualifying sessions but also ended his weekend without a competitive lap to his name.

So it was for Overton, who, after confirming on Oct. 30 that his deal with Baird was done, planned to spend the World Finals walking around The Dirt Track’s pit area in hopes of making contacts for 2015. He ended up heading to Charlotte to fill a racing seat, however, after receiving an unexpected phone call from the Rattliff team’s crew chief Jeff Gullett, who offered the youngster an opportunity to drive the No. 41 Bloomquist Race Car that Brad Neat of Dunnville, Ky., has steered in selected events this season.

The out-of-the-blue deal was an eye-opener for Overton, who realized that the talent he flashed this year racing on a national level for the first time with Baird hadn’t gone unnoticed.

“The same day it got on DirtonDirt that I was done (with Baird), I got a call from these guys,” said Overton, sitting on a four-wheeler alongside the Rattliff machine before the start of Thursday night’s World Finals program. “(Gullett) said they’d seen what I’d done this year and asked me if I wanted to go race, and I was like, ‘Hell yeah.’

“I’ve never even met Justin (Rattliff) or his daddy,” he added, shaking his head. “Neither of them are even here this weekend. They just said, ‘Give it hell.’ ”

Overton said he met Gullett and Rattliff Racing crewman Tim Tungate “in the parking lot” before signing in. Playing the role of a hired gun was definitely an unusual situation for the up-and-coming racer, a down-home country boy who admittedly is still trying to grasp the fact that his performance this season has suddenly made him a hot commodity in the Dirt Late Model world.

“It seems like I’ve run second to Jonathan (Davenport) my whole damn life (in regional events across the Southeast) and didn’t get much attention,” Overton said. “Then I got out there (with Baird) and won a heat race (and set fast time) at Eldora (during a World 100 preliminary night in September) and everybody knows who I am. It’s crazy.”

Overton’s run with Baird was short-lived — he only began driving the trucking company owner’s equipment in May — but it certainly put him on the division’s map. With only his 18-year-old brother assisting his effort much of the time, Overton scored a June 21 Carolina Clash Super Late Model Series victory on June 21 at Friendship Motor Speedway in Elkin, N.C., and a July 24 Schaeffer Oil Southern Nationals Series triumph at Modoc (S.C.) Speedway and was very competitive in many national events, including the World 100 (19th-place finish in his first feature start).

“I’ve never flown in a plane and I’ve never even been past Virginia in my until this year,” Overton said with a sense of awe, “so what I got to do running for Troy was something I’ve never experienced. Hopefully I’ll be able to keep things going forward.”

In the wake of his abbreviated World Finals appearance, Overton plans to close his 2014 campaign by running a couple upcoming Crate Late Model specials — a $10,000-to-win show Nov. 14-16 at Needmore Speedway in Norman Park, Ga., and the $20,000-to-win Turkey 100 Nov. 27-29 at Swainsboro (Ga.) Raceway — in a car owned by Bobby Kay of Anderson, S.C. He’ll spend the winter attempting to lock down a Super Late Model program for ’15.

“I’ll have to go to PRI (next month’s Performance Racing Industry trade show in Indianapolis) and see what I can put together,” Overton said. “There’s quite a few good Crate shows around home that I can make pretty good money running, but I’d like to at least get something together so I can run some big (Super Late Model) shows. We’ll see what happens.”