With relief, excitement, Richards back to racing 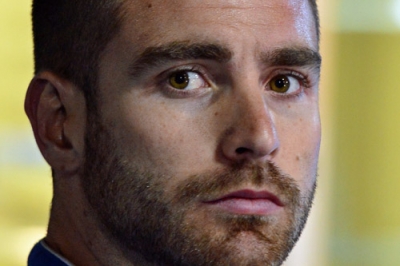 Absent from competition for the entirety of the 2014 Dirt Late Model racing season due to undisclosed medical issues, the 26-year-old superstar from Shinnston, W.Va., has received clearance from doctors to return to the cockpit and will make Saturday night’s UMP DIRTcar Fall Nationals at Eldora Speedway in Rossburg, Ohio, his first start in his father Mark’s Rocket Chassis house car in nearly 11 months. | VideoCast

It’s been a long, frustrating and often emotional period away from driving for Richards, a three-time World of Outlaws Late Model Series champion who is understandably thrilled to finally have the uncertainty surrounding his health resolved to the point that he can resume his already distinguished racing career.

Richards has come to be seen as preternaturally cool, calm and upbeat during his rapid rise to the top of the Dirt Late Model division, but his positivity was tested in unimaginable ways throughout 2014. In January, Richards, young and fit and primed to continue his march to all-time-great status in the sport, had his career suddenly halted by doctors who forbid him from racing while he underwent further testing to determine the reason for medical issues that were plaguing him.

As Richards shuttled from doctor to doctor and test to test with no immediate resolution, weeks turned to months and the Dirt Late Model world — and Richards himself — grew increasingly concerned that his sublime talent might never be displayed on a dirt track again. But finally, after extensive testing, specialists found that he had suffered nerve damage to his hands from past racing injuries.

Just a few weeks ago Richards received the go-ahead from doctors to race if he desired — and yes, he sure did.

“I’m feeling good,” said Richards, who will continue to be periodically monitored by doctors to make sure there is no further progression with his injury. “I think when you have injuries and stuff, your body tries to overcome things, and I’m feeling really good. I’m ready to get back in (the car) … it feels good to know I’m cleared to get back in and run some races this year.

“It’s been an interesting year for sure,” he continued. “(There have been) very emotional highs and lows all year long. Once we found out I couldn’t race back early this year, it was tough. That’s just how life goes sometimes, and I’m very fortunate and blessed to be able to get back in and get back at it.”

Indeed, when Richards hits the Eldora clay on Saturday night, he won’t be the same man he was the last time he turned a competitive lap. In addition to the life-changing medical scare he’s experienced, over the past nine months he’s seen racing from new angles, used his forced vacation as a reenergizing force and, last but certainly not least, became a married man with his August wedding to the former Andrea Cleveland.

“Although I haven’t been in a car this year, this has probably been the best year for me to grow as a person and to learn a lot of different aspects of life and of racing in general,” Richards said in an exclusive interview with DirtonDirt.com. “I’ve been more involved with helping customers (at Rocket Chassis) and doing some testing with guys and going racing with guys (and) putting cars together.

“Helping customers and being able to watch cars and see what (drivers are) telling me and what they’re feeling, and being able to sit back and watch and reflect on (it) … I think being able to look at that and try to hone in on what we need to do to get better — me as a driver and us as a company in general — I think that’s been the biggest plus.”

While Richards undoubtedly missed the thrill of sitting behind the wheel and stepping on the gas, his lengthy stay on the sidelines freshened him for the next chapter of his career.

“It was hard in a lot of ways, but in other ways it’s been somewhat of a relief,” said Richards, who has been one of the country’s busiest Dirt Late Model drivers since shortly after his debut in 2004. “As anyone knows, I have so much respect for all the guys that are involved in this sport, from the drivers to the crews and everybody — it takes so much love and sacrifice to be able to do it on every level, especially when you’re racing full-time for points on a series or running races regularly. It can be very overwhelming, and you definitely get to the point where … I definitely know exactly where (Brian) Birkhofer (the Iowa driver who announced he is walking away from racing for at least the near future) is right now. It’s easy to get to that point and get burnt out. It’s all you do all day, every day, and even when things are really good and you’re winning everything, it’s still tough to go through the cycle.

“So I think getting a little bit of a break from that and not being in it all the time (in 2014) has actually been really good.”

Richards also credits his new bride for keeping him sane in the midst of his trials and tribulations.

“My wife is everything to me,” said Richards, whose wedding ceremony was held in Ohio. “She’s been right there by my side and helping me through all this. We still got a lot to figure out, but it’s been really good and I just can’t wait to continue (racing).”

With a recent under-the-radar test session at Pittsburgh’s Pennsylvania Motor Speedway in Imperial, Pa., behind him, Richards is chomping at the bit to do what comes natural to him: slide around Eldora — one of his favorite tracks — Saturday night.

“There’s nothing that fills that hole of being able to get up there (on the cushion) and do it,” Richards said. “Once your adrenaline gets going and zoned in, there’s nothing like it in the world. I can’t wait. We’ve got a new car put together and I’m just gonna get out there and do the best I can — just have fun and not have any pressure.”

Once his comeback is old news, Richards plans to close out the ’14 season by entering the Dirt Track World Championship on Oct. 17-18 at Portsmouth (Ohio) Raceway Park and the season-ending World of Outlaws World Finals on Nov. 6-8 at The Dirt Track at Charlotte.

He will have a teammate for both events — Brandon Sheppard of New Berlin, Ill., who started the 2014 season as Richards’s replacement, will rejoin the Rocket Chassis house car operation to defend the DTWC crown he won last year in the iconic No. 1 car while Richards took a weekend off, and Rick Eckert of York, Pa., who replaced Sheppard in late April, will run the World Finals to complete the WoO schedule.

“Right now, we’re just gonna go out and race and see how the end of the season goes,” Richards said, “but if everything’s good and I’m cleared to race starting next year, I’m sure the plan will be we’ll race full time. I’m sure as long as I can race, I’m gonna be racing next year.”

That, of course, will bring a return to normalcy for Richards, who has gotten through a tough 2014 with plenty of help.

“I really want to thank all my fans and sponsors and family for sticking behind me,” Richards said. “Everyone’s been kind of curious all year about what’s been going on, but I’ve been behind the scenes all year long (and) just haven’t been in the driver’s seat. Seeing so much support already since we’ve announced that I’m getting back (in the car) has been overwhelming.”

“Once we found out I couldn’t race back early this year, it was tough. That’s just how life goes sometimes, and I’m very fortunate and blessed to be able to get back in and get back at it.”