From team, staff and series reports 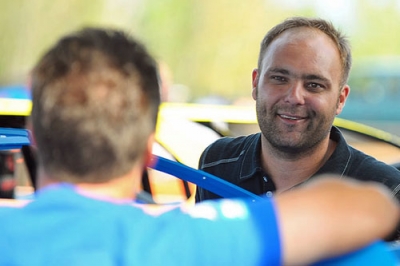 Seeing these words — rookie, Donny Schatz and Knoxville Raceway — in the same sentence doesn't quite compute. For the last decade and a half, Schatz, the eight-time Knoxville Nationals champion has displayed his incredible talent driving a sprint car at one of the most historic dirt tracks. | Complete Knoxville coverage

When the 11th annual Lucas Oil Late Model Knoxville Nationals presented by Casey’s General Stores opens Thursday, Schatz, who has competed in fewer than 20 Dirt Late Model races, will be an event rookie, circling the famous half-mile oval in competition for the first time in a full-fendered race car while battling the nation’s best Dirt Late Model racers.

The decorated sprint car champion is excited to make his first competitive laps in a Dirt Late Model on the Marion County Fairgrounds behind the wheel of his own No. 15 Rocket Chassis sponsored by Fastlane and Petro.

“I’m really looking forward to going and having some fun,” said Schatz, who tested his Dirt Late Model at Knoxville in July a few weeks before winning his eighth sprint car Nationals crown. “This isn’t August and I’m not driving a sprint car. I am just excited to be able to be part of the event. I’ve made a lot of friends the past few years on the Late Model side.

“This is something I’ve wanted to do. Our goal is to come out and do the best we can. Put up a good qualifying lap, get through our heat and make some good laps in the feature. We only get one night to race, unless Mother Nature changes our weekend plans, so we’re going to give it everything we’ve got.”

Schatz is in the midst of chasing his sixth World of Outlaws STP Sprint Car Series championship and plans to be behind the wheel of his familiar Tony Stewart Racing No. 15 sprint car at Bloomington (Ind.) Speedway on Friday and at the dirt-covered Berlin Raceway in Marne, Mich., on Saturday. His Late Model efforts will be Thursday only unless weather changes the schedule at either sprint car event.

“We knew that with how everything lined up that Thursday was our only option to race,” the 37-year-old Schatz said. “Last year, I had the chance to come watch and had a great time. Late Model racing is quite a bit different than my regular job that’s for sure.

“We’ve tried to learn more and more and improve every time we race. We’ve raced a handful of times this year and also had the chance to do some testing with guys that really know what they are doing in these cars. The learning curve is steep and we know how tough it’s going to be at Knoxville. We’re going there to have some fun and see what we can do.”

Schatz’s appetite for Dirt Late Model racing was piqued on a big stage during the 2012 Prelude to the Dream at Eldora Speedway in Rossburg, Ohio. Schatz raced his way from 12th to fourth in his first-ever Late Model race, sparking enough interest to put his own car together for 2013.

The Fargo, N.D., driver went out and earned a pair of weekly WISSOTA Late Model victories in his home state before doubling up in both his WoO sprint car and Northern LateModel Racing Association competition last August at River Cities Speedway in Grand Forks.

A venture to Arizona in January for the Winter Freeze event got him seat time with the Super Late Models, and in July he made his World of Outlaws Late Model Series debut at Hibbing (Minn.) Raceway, racing from 17th to finish eighth. He earned his second career NLRA victory at River Cities in August. — From team reports

One of the notable technical differences at this weekend’s Knoxville Late Model Nationals won’t exactly be visible to the naked eye, but it could end up playing a big role in the competition. | 2013 story

“We made a subtle change this year to our tire rule package for Knoxville that I think is gonna really help the racing,” said Rick Schwallie, assistant director of the Lucas Oil Series. “Last year we went there with hard tires because, in much of the Midwest, that’s all they run — for those regional series out there like the MLRA, Corn Belt Clash (and the Super Late Model Racing Series), it’s (Hoosier) LM-40s or 06s or WRS-55s (compounds). All those series run hard tires every week, and that’s what we went with because Knoxville is an Iowa track and you think that’s what you gotta have there.

“Well, I didn’t realize that it was a mistake on my part. It was the first year I was selecting tire rules for each race, and apparently we had 20s (a softer compound option) along with 40s there the year before (2012) so there was a lot of concern about being on hard tires and steering and entering turn one at Knoxville at full speed. We kind of feel like we’ve met them in the middle this year with our tire rule being that the rears are the hard tires but with the fronts they’re allowed the LM-20s and the 02 (the Lucas Oil tour’s equivalent to the LM-20).

“I think that will help them steer — which, ultimately, if they can steer better, it should help with side-by-side racing,” he added. “I look forward to seeing how that turns out for us.” — Kevin Kovac

Wisconsin drivers Jimmy Mars of Menomonie and Brady Smith of Solon Springs are the only drivers to start all 10 main events at the Lucas Oil Late Model Knoxville Nationals. Six drivers (Shannon Babb, Brian Birkhofer, Scott Bloomquist, Denny Eckrich, Steve Francis and Billy Moyer) have started nine main events. … Scott Bloomquist is the only repeat winner (2005 and 2009). … Brian Birkhofer of Muscatine is the only home-state driver to win (2004). … Rocket house car driver Rick Eckert will return to the event after a three-year hiatus. … Heading to Knoxville, Don O’Neal leads the chase for a pair of postseason bonuses on the Lucas Oil tour. He’s got a 60-point edge on Jimmy Owens in the Bad Boy Mowers TV Challenge presented by E3 Spark Plugs, and holds a 40-point margin on Owens in the ASi Racewear Crown Jewel Cup presented by DirtonDirt.com standings.