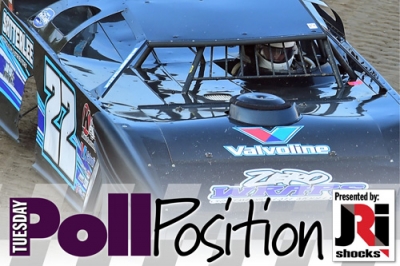 Lucas Oil Late Model Dirt Series points leader Jimmy Owens enjoyed a weekend off the track for the first time in months, but the Newport, Tenn., driver still commands the No. 1 spot in DirtonDirt.com’s Top 25 power rankings for a second straight week.

Owens, who sits 25 points ahead of Don O’Neal in the Lucas Oil standings as the tour travels to Brownstown (Ind.) Speedway for the 35th annual Jackson 100, received 11 first-place votes in a poll presented by JRi Shocks.

Darrell Lanigan of Union, Ky., improved one spot to No. 2 in the rankings, receiving six first-place votes after picking up his record-setting 16th World of Outlaws victory of the season in the Down & Dirty 65 at a dirt-covered Berlin Raceway in Marne, Mich.

World 100 winner Scott Bloomquist of Mooresburg, Tenn., received five first-place votes, but slipped to No. 3 after a top-five finish at Berlin. Dale McDowell of Chickamauga, Ga., maintained the No. 4 spot, with Jonathan Davenport of Blairsville, Ga., rounding out the top five; both were idle.

Gregg Satterlee (pictured) of Indiana, Pa., made one of the biggest jumps, improving four spots to No. 14 after his $10,000 Pittsburgher weekend sweep at Pittsburgh’s Pennsylvania Motor Speedway’s. Billy Moyer Jr. of Batesville, Ark., rose five spots to No. 19 following his $10,000 victory in Tri-City’s St. Louis Showdown.

Mason Zeigler of Chalk Hill, Pa., fell four spots to No. 24 in this week’s poll after a disappointing weekend at PPMS. Despite his runner-up finish at Tri-City, Brian Birkhofer of Muscatine, Iowa, slipped two spots to No. 18. Kent Robinson of Bloomington, Ind., dropped out of the rankings.

Brandon Sheppard of New Berlin, Ill., returned to this week’s poll. Among others receiving votes were Devin Moran of Dresden, Ohio, and Justin Kay of Wheatland, Iowa. Moran notched his 16th victory of the season over the weekend, while Kay was officially crowned IMCA’s weekly Late Model champion with a division-record 24 victories.

DirtonDirt.com invited more than 30 media members and drivers along with track and series representatives to vote in this season’s rankings. Twenty-two submitted ballots this week. Weekly polls continue through mid-November.

Comment: Hoping to turn his bad luck around as he makes his way to Brownstown for the 35th annual Jackson 100. Series points: None. Last week's ranking: 5th (nc)

Comment: Up five spots in the poll after picking up his third $10,000 victory of the season in Tri-City’s St. Louis Showdown. Series points: None. Last week’s ranking: 24th (+5)

Comment: Hoping to improve this weekend after struggling over the Pittsburgher weekend at PPMS. Series points: None. Last week's ranking: 20th (-4)

Comment: Currently fourth the UMP weekly standings after picking up an eighth-place run at I-55. Series points: None. Last week's ranking: Unranked