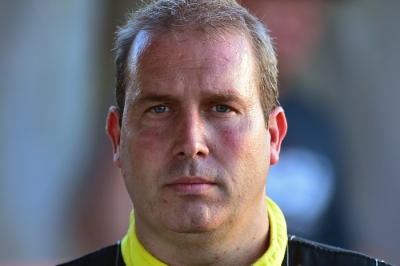 The 2014 season may not have been too kind to Shane Clanton thus far, but that doesn't mean the veteran 39-year-old racer is doubting himself entering this weekend's World 100 at Eldora Speedway. In fact, the former World 100 and Dirt Late Model Dream winner is as confident as ever as he prepares to head to the famed half-mile oval in Rossburg, Ohio, for Dirt Late Model racing's most prestigious event. | Complete World 100 coverage

"We haven't had the kind of year we'd like to, but I still have plenty of confidence just like any time we go to Eldora," said Clanton, a regular on the World of Outlaws Late Model Series who has struggled to meet his usual standards this season with no victories on the national tour. "We unload every week with the confidence that we can go out there and win, but we really believe that even more when we unload at that place."

Clanton has earned the right to be self-assured when it comes to Eldora. The Zebulon, Ga., racer is among only six drivers to claim the coveted Eldora double with victories in both the World 100 and the Dream. His first Eldora breakthrough came in the 2008 World 100 and he added the Dream's $100,000 paycheck in 2012. His most recent Eldora victory came in a World 100 preliminary feature last season.

Clanton will look to add to his Eldora accomplishments this weekend with perhaps another preliminary night victory — the event schedule features twin $5,000-to-win preliminary features Thursday and Friday. But he would prefer to claim the $47,000 winner's paycheck in Saturday's UMP DIRTcar-sanctioned World 100 main event.

"To win any big race is sweet, but to win the World 100 makes your year," said Clanton, who drives the house car for Capital Race Cars, the Georgia-based chassis brand he founded with retired driver Marshall Green before the 2011 season. "It's been a long time since I won a big race, but hopefully we can capitalize on some of the things we do good there and hopefully come out with a win.

"Anytime you can win at Eldora, if it's a non-qualifier's race or a preliminary race like we won last year, that swings the whole season and really picks you up. Eldora's a prestigious place. Everybody's eyes are watching what happens at Eldora. To win there, it's exciting."

Another World 100 trophy is just what Clanton needs to salvage his 2014 season. He has just two victories on the season overall, with both coming in regional events. With just four races remaining on the WoO LMS schedule, he's dangerously close to going winless on the series for the first time since the tour's modern era began in 2004.

The season-long drought has left Clanton well out of the WoO championship picture. Currently seventh in the tour's standings, if Clanton doesn't improve before the end of the season he'll equal his worst points finish since joining the tour full time in 2006.

But all that will be virtually forgotten if Clanton wins the World 100. A season that has been among his worst statistically could be remembered as one of his best depending on the results of one race.

The good news for Clanton is he's entering the World 100 on a high note thanks to a new Capital car he and Green built with an eye toward the World 100. Clanton nearly won in the car's first night out during the Aug. 22 WoO event at I-96 Speedway in Lake Odessa, Mich., dominating the 50-lap race before a flat tire knocked him from the lead with eight laps remaining. He's since followed that with a victory in an Aug. 24 regional event at Little Valley (N.Y.) Speedway and a pair of top-three finishes in the WoO Labor Day weekend doubleheader at Selinsgrove (Pa.) Speedway.

While one of the two strong runs at Selinsgrove came in the car he ran earlier in the season, the backup machine featured many of the changes included on the new chassis. With both of his cars performing well, Clanton is confident his team has found a setup that will also be fast at Eldora.

"We've definitely got a good race car and now we know this one's a good piece, too," Clanton said after his third-place finish in the Aug. 31 WoO event at Selinsgrove. "We've changed a lot of stuff trying to get a baseline where we can race and know what to do to change for the feature and we're getting really close.

Indeed, fine tuning a car to best fit track conditions is vital to success at Eldora just as it is at any other dirt track. That, Clanton believes, has been the main source of his struggles this season.

"I know I can run with any of these guys," Clanton said. "It's just, today's racing, you miss it just a little bit and it seems like you're off a mile. The competition is so close, but I feel like we're back to the point with our program, if we just make the right adjustments we can beat anyone. It's just making that right adjustment at the right time."

In addition to his new car, Clanton's recent performance upswing has also been helped by some positive changes to his race team. He recently welcomed back crew chief Jonathan Owenby, the mechanic who was with Clanton for both his Dream and World 100 victories, and brought on Billy Ward to handle tires. Along with a renewed focus on communication and teamwork, the personnel additions have allowed Clanton and crew to better keep up with those crucial adjustments that need to be made to the car throughout a race night.

"When you struggle like we've been struggling, it's not like we're not working," Clanton said. "It takes a whole program to run with these guys. Getting our program better for one is what we've really been working on. Our car had to change a little bit, but it all revolves around your program. When the program's good, everything's good.

"It's the crew, it's the driver — it's everybody working together that's the main key. When you're working good together and you're communicating and you make the right adjustments on the car, that's when the good results start to show."

A proven driver, a fine-tuned race car and a team chemistry are just some of the parts of the equation it takes to win at Eldora. Another part, as Clanton well knows, is luck. With the first three parts of the equation seemingly coming together at the right time, Clanton hopes the some luck will also go his way this weekend.

"A lot of it goes back to Lady Luck," Clanton said. "There's just so many good cars there and the competition is so close these days that you gotta have some things go right for you. A good draw and get a good invert in the heat race is big. If you hit those and you have a good car, you'll probably find yourself sitting pretty."