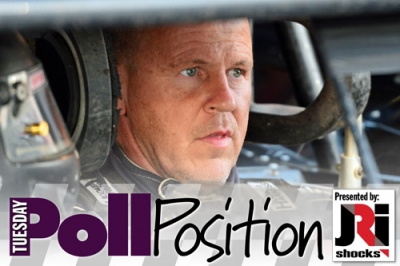 After tying his own series record with his 15th World of Outlaws Late Model Series victory Sunday at Selinsgrove, Darrell Lanigan of Union, Ky., has unseated Jimmy Owens for the No. 1 spot in DirtonDirt.com’s Top 25 power rankings.

Lanigan ended his Labor Day weekend with two World of Outlaws victories, stretching his lead in the series points standings while receiving 13 first-place votes in the poll presented by JRi Shocks.

Owens, the Newport, Tenn., driver who held the No. 1 spot in the poll for eight consecutive weeks, slipped to No. 2 with nine first-place votes after a runner-up finish in Sunday’s Hillbilly 100 at I-77 Raceway Park.

Don O’Neal of Martinsville, Ind., who captured the $25,000-to-win Hillbilly 100, climbed one spot to No. 3, while Scott Bloomquist of Mooresburg, Tenn., fell one spot to No. 4. Billy Moyer of Batesville, Ark., rounds out the top five.

Steve Francis of Ashland, Ky., made the biggest jump in this week’s rankings, rising four spots to No. 9 after notching two runner-ups and a third-place finish in the Hillbilly 100 over the weekend. Despite a wild rollover in Sunday’s Hillbilly, Mike Marlar of Winfield, Tenn., also climbed two spots to No. 14.

DirtonDirt.com invited more than 30 media members and drivers along with track and series representatives to vote in this season’s rankings. Twenty-three submitted ballots this week. Weekly polls continue through mid-November.

Comment: Tied his own personal record with his 15th World of Outlaws victory of the season Sunday at Selinsgrove Speedway. Series points: 1st (World of Outlaws). Last week's ranking: 2nd (+1)

Comment: Is a winner in his Attica debut on Friday, but struggles with fuel pressure issues at Portsmouth and I-77. Series points: 3rd (Lucas Oil). Last week's ranking: 3rd (-1)

Comment: Coming off his Lucas Oil victory at Bulls Gap, the Dream winner will return to Eldora this weekend for the World 100. Series points: None. Last week's ranking: 7th (-1)

Comment: Still looking for his first World 100 victory after his 2005 disqualification for being light at the scales. Series points: 1st (Summernationals). Last week's ranking: 9th (-1)

Comment: Battles among the frontrunners in Sunday’s Hillbilly 100 at I-77 before dropping back to finish eighth. Series points: 5th (Lucas Oil). Last week’s ranking: 12th (-1)

Comment: Uninjured after taking a wild ride in Sunday’s Hillbilly 100 when he made contact with the turn-three guardrail. Series points: None. Last week's ranking: 16th (+2)

Comment: Will look to improve at Eldora after disappointing finishes in WoO stops at Lernerville and Selinsgrove.  Series points: None. Last week's ranking: 18th (nc)