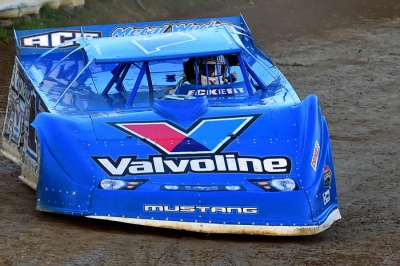 Rick Eckert is looking for his first 2014 WoO victory. (rickschwalliephotos.com)

Time is running out on Rick Eckert. With seven races remaining on the 2014 World of Outlaws Late Model Series schedule, Eckert, the national tour's 2011 champion and fourth all-time winningest driver, is dangerously close to ending the season winless on the series for just the second time in 10 years and for the first time since 2007.

"That would be a big disappointment," said Eckert, the 48-year-old York, Pa., driver who has followed the WoO tour full time since its modern era began in 2004. "You surely don't want to go a whole year and not get a win on the series you race; that's not a very good sign. We're doing our best to avoid it, but we obviously got to do it here soon 'cause we're running out of races."

Eckert will have ample opportunity to break into victory lane this weekend as the series heads for a tripleheader in his home state of Pennsylvania. The series kicks off the holiday weekend Friday evening at Lernerville Speedway in Sarver for the inaugural Working Man 50 before heading to Selinsgrove (Pa.) Speedway for the Showdown on Sand Hill on Saturday and the Late Model National Open on Sunday.

Eckert, whose national traveling duties only allow him a few chances each year to race close to home, would like nothing more than to end his year-long winless streak in front of his home-state fans.

"We're racing on two good tracks. Lernerville is a really racy place that pretty much everyone enjoys going to. Selinsgrove, the last couple years has been really good. Between those two, hopefully we can get it done because there's no excuse not to."

Indeed, Eckert doesn't have much room for excuses for his WoO drought. The 2014 season was expected to be a great year for the veteran racer after he was tapped to drive the Rocket Chassis house car in place of three-time WoO LMS champion Josh Richards, who has been sidelined all season with medical issues.

Headed by Rocket Chassis co-founder Mark Richards, the Rocket house car team ranks among the top Dirt Late Model rides in the country. But Eckert and the Rocket crew haven't clicked like one might expect a top-flight race team and a Hall of Fame shoo-in driver. His only victories in the famous blue No. 1 machine came away from the WoO in a pair of UMP DIRTcar Summernationals events in June.

As for Eckert's WoO campaign, the consistency has been there with 14 top-five and 25 top-10 finishes in 31 races putting Eckert second in the series standings. But he hasn't found that extra gear to help him break into victory lane or seriously challenge points leader Darrell Lanigan of Union, Ky., who is headed toward his third series title with a whopping 13 victories.

"They have a lot more stuff to work with and they have a great team here," Eckert said of the Rocket house car program. "Their budget's a lot better than mine has been so that in turn should mean results, but I haven't been able to give it to them. It doesn't help that Darrell's been a little bit hoggish and takes half the wins, but even as good as he is, we should be winning races.

"It's not because of lack of effort on anybody's behalf. They've been working hard and I've been doing as good as I can. We just haven't been able to put a whole night together. One night we'll qualifying good and the next night we'll race good but we start too far back. Maybe one of these days we can finally put a whole night together and breakthrough the ice and get moving 'cause we're running out of time."

There have indeed been some growing pains for both Eckert and the Rocket crew as they've attempted to find the right combination. Eckert tries his best to communicate what he needs the car to do and the crew do their best to dial in the car's setup in order to make it happen. But between Eckert, who has driven Bloomquist Race Cars in recent seasons, getting the feel of a new car and the Rocket crew learning what kind of setup their new driver likes, things haven't progressed as expected.

"When I had my own team I didn't have a lot of help, so I was pretty much the crew chief, the driver, the wash boy, everything," said Eckert, who spent the past four years fielding his own equipment after spending the previous 15 years driving for the late Raye Vest. "I don't have near as many jobs here so I'm not as hands-on as I'm used to being.

"It's harder to communicate, and we're in a totally different car than I've ever raced. The changes I'm used to making is changes they're not used to making and they're used to having a different driver and he drove different than I do. But they'll change anything I want to and they've got pretty much anything I need. The only thing we're missing is results."

Eckert hopes he and the Rocket team can find the right combination and find their way into victory lane during this weekend's events at Lernerville and Selinsgrove. While there will still be four more races for him to get it done following the Labor Day weekend triple, he'd like to go ahead and rule out the possibility of a winless season sooner rather than later in order to also set himself up for a another win or two before the year is over.

"The way racing goes, you get it turned around and win one, it doesn't make any sense, but a lot of times that second does come a lot easier," Eckert said. "Maybe if we can finally just get that first one under belt, we can click off a few more.

World of Outlaws in Pennsylvania

Selinsgrove Speedway (Saturday and Sunday): Tickets for Showdown on Sand Hill are $35 (Saturday) and $38 (Sunday) for adults and $20 for students (12-17). Visit selinsgrovespeedway.com for more info. Gates open at 4 p.m. both days with time traisl at 7 p.m.