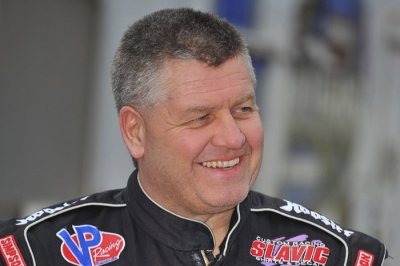 This weekend's World of Outlaws Late Model Series visit to the Wolverine State could be just what Chub Frank needs to spark a much-needed hot streak. With the national tour visiting I-96 Speedway in Lake Odessa, Mich., on Friday and Merritt Speedway on Saturday, Frank heads to one track where he's the only series regular to score a victory and another that's a strong fit with his driving style.

In 2007, Frank, 52, of Bear Lake, Pa., won the only previous WoO event held at I-96, which welcomes the tour back for Friday's NAPA Lake Odessa 50 Presented by Keyser. For Merritt's NAPA Merritt 50 on Saturday, Frank makes his fourth visit to one of his more favorable racetracks.

"I'm looking forward to the Michigan tracks because we ran good there," said Frank, the veteran racer who owns 16 career WoO victories. "Any track you win at, you always enjoy going back, and Merritt, it's a smaller track that's more along the lines of what I like. It's one of the tracks I really like."

Frank could use a pair of strong performances over the weekend to build some momentum for the remainder of the season. While 2014 has been an improvement on recent campaigns — his six top-five finishes are the most he's had in a WoO LMS season since 2009 — his program still isn't quite to the level he would like it. And there's the looming fact that his series winless streak reaches the five-year mark Friday.

"We've been better and more consistent, but we just need to get it a little bit better and find that little extra that helps you win races," said Frank, who last won on the series Aug. 22, 2009, at Atomic Speedway in Chillicothe, Ohio. "Right now, we're just looking for good runs and trying to figure out how to step up a little bit more. We've been close a lot and had a decent car, but it seems like somebody is always going to get their car just right. That somebody hasn't been us lately.”

While Frank is optimistic about his return I-96 Speedway, he doesn't expect to have any advantage over the other series regulars based on his 2007 victory. The track hardly resembles the half-mile oval on which Frank won. In fact, that track is no longer there.

Since the tour's last visit, I-96 Speedway has undergone major reconfigurations. A smaller 3/8-mile oval was added in the infield of the original track several seasons ago and hosted the track's weekly action through the 2013 season while special events were often held on the outer track. Finally, following the between the 2013 and 2014 seasons, the track's management started from scratch, replacing both the outer track and the inner track with a single 3/8-mile oval that was designed to be more symmetrical than the previous 3/8-mile configuration, which shared its front straightaway with the half-mile track.

If a completely new track isn't enough to wipe out Frank's advantage at I-96, seven years of technological advancements on dirt Late Model race cars should do the trick.

"Things have changed so much since then,” said Frank, one of a handful of drivers to capture both the World 100 and Dirt Track World Championship. "Cars are different, shocks are different, everything's so much different now that anybody can go win there as far as whoever gets their car right. You can go back and remember somewhat about where you ran on the racetrack, but as far as any setup notes or anything, that stuff would be out the window anyway."

Even with a track that's completely different from the one he won on, Frank feels good about his return to I-96.

"It's still good to go back to a place you've won no matter how long it's been," Frank said. "Maybe we'll go there and have some good vibes that'll help get us going."

Frank might not have the results to show for it, but Merritt is a track that fits his driving style when the 3/8-mile oval's clay surface slicks over. In three WoO races at Merritt, Frank has a best finish of seventh in 2011. It was a disappointing finish to a race in which he ran among the top five for much of distance before getting shuffled back late. He had another top-five run going in 2012 before suspension issues dropped him out of the event.

"We haven't had the finishes to show for it, but we've had some good runs there," Frank said. "We broke running top five and we've run up front a little bit, but it depends on what you get there as far as the track. We've had three or four different type surfaces there. When it's slick, that's what I look forward to. That kind of track just seems to fit my driving and the way I like my car."

Frank will indeed hope for a track surface that suits his driving style and his car's setup because adjusting his Rocket Chassis to an unfamiliar surface isn't one of his team's strong suits. With just one full-time crew member between Frank and teammate Boom Briggs, the team rarely has time in a race night to make major setup adjustments or keep a close eye on changing track conditions. That's been a major disadvantage for Frank in a sport where the driver and crew that best adjust their car to the racetrack is often the team who visits victory lane at the end of the night.

"You gotta be on it all the time as far as getting everything right," Frank said. "We're trying to win every night — I just know what we're up against. We have to be on when we get to the racetrack because we can't catch up. That's the biggest problem I'm facing right now. I just don't have enough help to catch up as far as changing the car around and stuff.

"We have to pretty much stay with a standard (setup) wherever we go and make small adjustments off of it. Hopefully we get everything right because if we get behind — which normally, that's what happens — it's really hard for us to catch up.”

Even with the challenge of working with slim crew, Frank has managed to put together a solid season. Improving on a disappointing ninth-place finish in the 2013 standings, Frank is fifth in in points with nine races remaining. He has no plans of cruising to the end of the season, however, as fourth-place Morgan Bagley is just 30 points ahead of him and sixth-place Eric Wells and seventh-place Shane Clanton aren’t far behind.

For Frank, who hasn't finished better than fifth in the series standings since logging his career-best result of second in 2007, improving to fourth by the end of the season would be a major boost.

World of Outlaws in Michigan