Rookie season one of transitions for Junghans 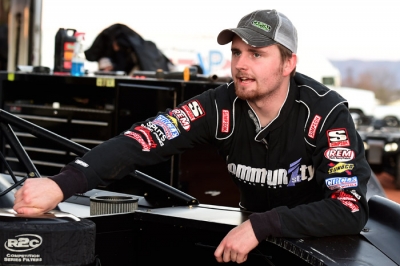 In his rookie season on the World of Outlaws Late Model Series, Chase Junghans of Manhattan, Kan., is not only learning the ins and outs of racing on the national tour, but also continuing his transition from modifieds to Late Models.

In just his second full season of Late Model competition, Junghans, the 21-year-old driver who competed regionally on the Lucas Oil Midwest LateModel Racing Association in 2013, has held his own as he’s made first-time visits to most of the tracks on the WoO schedule.

“I haven’t even seen these tracks before and we’re still running decent,” said Junghans, who’s currently 10th in the overall series standings with one top-five and five top-10 finishes in 25 WoO starts along with a pair of heat race wins. “I can’t really complain about that. I mean, most every night we’re learning how to race the track, then being on these new tires and all that stuff. It’s pretty much been a learning experience all around, but we’re doing our best.”

Junghans stands second in the rookie points, which count the best 25 finishes in a quest for the $10,000 award. Frank Heckenast Jr. of Frankfort, Ill., leads the rookie standings by 236 over Junghans and 362 points over Boom Briggs of Bear Lake, Pa.

“Racing with these guys, you make one little mistake and three cars pass you,” Junghans said. “It can be frustrating, but I think it makes you a better driver. I think I’m 110 percent better than at the start of the year, but I still make mistakes. It’s a big learning curve, but you gotta keep doing it to figure it out.”

Competing on a national tour for the first time has also forced Junghans to adjust to being away from home for months at a time. With the World of Outlaws taking him far away from Kansas, Junghans figures he’s spent fewer than 30 nights at home since the tour launched in February. Most of his time has been spent on the road with his Shop Quik Racing team, but he also spends time in Georgia, where his Capital Race Cars are built by fellow WoO  regular Shane Clanton and retired driver Marshall Green.

“I try to go home when we have a little bit of off time, but it’s tough being so far away,” Junghans said. “It’s always nice going back and seeing family and hanging out with friends and stuff, and it’s tough missing that sometimes. But I’m used to it now; I sleep better in the truck than I do at home anyway.”

Continuing the adjustment theme, Junghans has also worked to adjust to a new chassis this season after switching to Capital cars late in 2013. That adjustment has been helped by a close relationship with Clanton and Green. Having Clanton, a WoO veteran and former Dream and World 100 winner, as an unofficial teammate this season has been a big boost for Junghans.

“They’ve given me so much help,” Junghans said. “I know it’s definitely one of the reasons I’m running as good as I have been. They help out a ton.”

Junghans has also helped the relatively new chassis brand, which is still expanding after launching in 2011.

“That’s kind of the reason I got one, so I could be more involved with what they’re doing with the chassis and everything,“ Junghans said. ”Plus not many people have them, so when we have our stuff running good, I like to know that not everybody has our information. I think eventually we’ll get to that point. It doesn’t happen overnight.”

Junghans’ main goal for the remainder of the season is simply to continue to improve. Of course, he’d also like to break through for a victory before the year is over. As for the rookie chase? His plan is to focus on performing the best he can each night and see how the points shake out at the end of the season.

“The rookie deal, I’d love to win it. But if you can pick up a win, I think that’s just as good and would mean just as much to me.

“Hopefully we can get running better. We’ve been struggling a little bit, but I think we’ve got somewhat of a gameplan to get things going our way. I’m trying not to worry about the rookie stuff or the points. I’m just trying to get good finishes and get to where we can be in a better position to try and win races.”