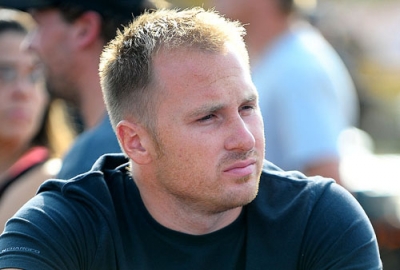 Frank Heckenast Jr. of Frankfort, Ill., would love to maintain his lead in the World of Outlaws Late Model Series rookie standings over the final nine races. But he’s also got his eye on the national tour’s overall standings.

Heading for the upcoming Michigan doubleheader at I-96 Speedway in Lake Odessa and Merritt Speedway Heckenast leads the rookie standings by 236 over Chase Junghans of Manhattan, Kan., and 362 points over Boom Briggs of Bear Lake, Pa. The top rookie picks up a $10,000 paycheck following the season-ending World of Outlaws World Finals Nov. 6-8 at the Dirt Track at Charlotte in Concord, N.C.

Heckenast has been the most competitive and consistent rookie, but he knows could change quickly if he struggles, allowing Junghans or Briggs to overtake him in the season’s final races. He’s is going to do everything he can to make sure that doesn’t happen.

“I’m not really worrying about the rookie deal, but I know that Chase or Briggs could catch us,” said Heckenast, a 26-year-old second-generation racer. “I know that if I just go out each week and run my best, we should be fine. That’s really how I’m approaching it, just doing my best to be competitive each night.”

After honing his skills at bullrings throughout Illinois and the Midwest, Heckenast has been solid in his first full season of national touring. With 11 top-10 finishes, one top-five and three heat race victories, Heckenast sits eighth in the overall WoO standings, 44 points behind seventh-place Shane Clanton and 72 points back of sixth-place Eric Wells.

Curiously, Heckenast’s best runs have come at tracks where he has limited experience. His season highlight thus far was a runner-up effort July 24 at Independence (Iowa) Motor Speedway. In just his second appearance at the 3/8-mile track, Heckenast challenged race winner Darrell Lanigan, a two-time WoO champion and current points leader, for the lead throughout much of the race before settling for a career-best series finish.

He also scored top 10s at multiple tracks where he made his debut, including I-30 Speedway in Little Rock, Ark. (sixth), Potomac Speedway in Budds Creek, Md. (seventh), Brown County Speedway in Aberdeen, S.D. (eighth) and Big Diamond Speedway in Forestville, Pa. (ninth).

However, Heckenast has failed to capitalize on races at familiar tracks. He missed the feature at the USA Nationals at Cedar Lake Speedway in New Richmond, Wis., and could only muster a 16th-place effort at Fairbury (Ill.) American Legion Speedway’s Prairie Dirt Classic. Both tracks are places he’s not only visited buy had success at in the past.

“It’s been going pretty good, but it’s actually the opposite of what I thought going into,” Heckenast said. “The places that I’ve run good at before like Cedar Lake and Fairbury I’ve actually been struggling. And the places that I thought I’d have a hard time at went really smooth. It’s kind of frustrating because you want to take advantage of the races at the tracks you know.”

While he struggled at major events at Cedar Lake and Fairbury, Heckenast’s experience on the tour this season has made him more competitive at bigger races. He proved that with an impressive ninth-place effort at Farmer City (Ill.) Raceway’s Illini 100 and a 13th-place result in his first appearance at the Firecracker 100 at Lernerville Speedway in Sarver, Pa.

“We used to go to the big races worried about making the race,” Heckenast said. “Now you come here, and you’re worried about the race. The attitude has changed. We used to roll into the big races and we’re like ‘Ah geez, all the good guys are here.’ Now it’s every night I have to deal with guys like Darrell (Lanigan). That’s only made me better.”

Indeed, Heckenast has shown improvement throughout the season. A recent switch to Club 29 Race Cars, the fledgling chassis brand launched by Lanigan this season, produced a mid-season pick-me-up that included Heckenast’s runner-up finish at Independence. He’s hopeful that his upward trajectory will continue and lead to a breakthrough victory before season’s end.

“When we started this deal, I just wanted to make the races,” said Heckenast, who has made 27 of the tour’s 29 features this season. “Then we got to the 10th to 15th range. I got in Darrell’s car and it picked us up from like sixth to 10th. Now we’re getting where we’re running from second to sixth in some of these.

”Hopefully we can consistently stay in that second to sixth range or at least in the top 10. I think if we do that, one of these nights we’ll have a few things go our way and maybe be able to pick off a win.”

Along with his eye toward a WoO victory, Heckenast also has his eyes on points. No, not the rookie points. He’s doing his best not to worry about those and is instead concerned with the overall series standings, where he has the chance to pick up two spots before the end of the year.

If Heckenast were able to climb from eighth to sixth, he would match Wells, who finished sixth in winning the 2013 rookie title, for the highest points finish by a rookie. A seventh-place finish would match the rookie-year points finishes of Bub McCool (2012) and Austin Hubbard (2010), while maintaining the eighth spot would equal Tim Fuller (2007) and three-time series champion Josh Richards (2005).

”Winning Rookie of the Year was our main goal starting out and I definitely still want to win it,“ Heckenast said. ”But now we’re looking at the big picture, too. We’re eighth in points, but we’re not too far out of sixth or seventh. It pays more money to run sixth than eighth, and we’ll be set up better next year for provisionals for Florida (where the series open its season each February). We’re trying to get that handled and if we do, I’m pretty confident the rookie deal we’ll work out in our favor as well.”

“I’m not really worrying about the rookie deal, but I know that Chase (Junghans) or (Boom) Briggs could catch us. I know that if I just go out each week and run my best, we should be fine. That’s really how I’m approaching it, just doing my best to be competitive each night.”