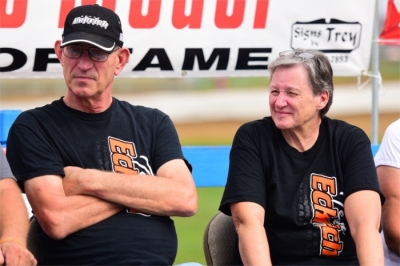 UNION, Ky. (Aug. 9) — Hall of Fame memories flowed Saturday at Florence Speedway where the 2014 Class of the National Dirt Late Model Hall of Fame was enshrined as part of the 32nd annual Sunoco North-South 100 weekend.

Among five drivers inducted was Ken Walton of Viola, Iowa, winner of the 1978 World 100 at Eldora Speedway in Rossburg, Ohio. Years later, Walton still remembers the special night and his late-race pass of Jerry Inmon that propelled him to victory in one of Dirt Late Model Racing’s most prestigious events. He also joked with fellow Hall of Famer Larry Moore, who was among those on the dais during inductions.

“It just so happens that Larry (Moore) got a little sideways in front of me as I was lapping him,” Walton recalled, turning around to glance at Moore. “And I was coming out of turn four … I was running second … I took him down the front straightaway and deposited him in turn one, cause I didn’t want to go to the back of the pack. And that’s what happened to Larry … we’re still good friends.”

Along with the World 100, Walton was the winner of special events across Iowa and Illinois, picking up multiple track championships throughout his career. He was the National Speedway Contest Association champion in 1979 and 1981, and in 1984 was the NASCAR Weekly Central Regional champion and the All-Iowa points champion. He retired in 1988.

Another driving inductee was Bob Kosiski of Omaha, Neb., who joins sons Steve and Joe — both on hand at Florence with other family members — in the Hall of Fame.

Throughout his career, the elder Kosiski captured 11 track championships at his home-track Sunset Speedway. Though most of his time was spent at the dirt track, he entered the 1960 Daytona 500 where he finished 36th. He went on to sweep special events across the Midwest, collecting 27 victories over the 1973 season. He retired in 1978, but has long been part of the successful careers of his sons Joe, Steve and Ed.

Steve Kosiski noted that when one of three emcees, Bob Markos, introduced his father, he noted his racing career started while he was a high-schooler. He found that fact interesting, joking with his dad.

“I heard he was a sophomore in high school when he raced,” Steve said. “The golden rule at our house with Mom and Dad was that we could not race until we were out of high school.  So you know, 'Do as I say not as I do,’ type deal must have been the thing.”

A memorial race is held at Fayetteville (N.C.) Motor Speedway each year in honor of the late Ed Gibbons, who died in an automobile accident in 2009 at 46 years old.

The Manning, S.C. driver was inducted to the Hall of Fame this year after collecting multiple special event victories across the Southeast over the span of his racing career. He won the Carolina Clash Super Late Model Series in 2001 and his final victory came in November 2008 when he captured $9,000 in the tour’s season finale.

Gibbons’ son, Gib, now races Late Models in the Southeast. He accepted the Hall of Fame award on his father’s behalf, and remembered his father successfully competing with even the nation’s best professional drivers.

“He could run with any of them,” Gib Gibbons said. “He’d be at work Monday through Saturday or Friday, and then would go out there and race with them.”

Among those inducted in the contributor category were Larry and Penny Eckrich, who established themselves as one of Iowa’s winningest race teams beginning in the 1980s. Between the couple's various drivers, the Flyin' 50 team boasts nine track titles and more than 1,200 feature victories. But for the Eckrich family, racing wasn’t just about winning.

“We did what we loved doing,” Penny said. “We loved racing and we loved having our family around us, so we did it together. And that’s the way it was done back then. Everybody got in the truck and we took off and we raced. And when we had hired drivers, they were in that same truck.

“We went to the races and we won. If we won, we celebrated. If we lost, we cried and we came home and fixed the car. Now, our children take over … David, Doug, Denny and Andy, and my daughter’s husband Chris Simpson, all race … and it can be a very colorful night when they all four drive at the same track against each other.”

The Eckrich's sons Denny, Dave and Andy have all gotten behind the wheel, with their brother Doug crewing for the team. Larry said his children all grew up around the racetrack, with Denny sneaking into the pits to win his first bomber race at age 14. He said Andy began changing gears on race cars at age 10.

“Years ago, they probably would have put me in jail because I had child labor, you know,” Larry said. “Every one of the kids worked on the race car. They snuck in the pits when they weren’t supposed to be in there because they were scraping mud.

“Things like that all entered into their careers and what they do now. They started out real young. I think all families should do that. But they would have threw us in jail, because it wasn’t right to have a kid that young working on a race car.”

Other contributors inducted into the Hall of Fame were Allan Brown, who traveled to more than 2,000 racetracks over his nearly 30 years of publishing the National Speedway Directory. The late Walter Burson, former technical inspector for the STARS tour and the World of Outlaws Late Model Series was another inductee.

Saturday’s ceremony also recognized Red Farmer, former driver in both the NASCAR and dirt track ranks, with the Hall of Fame’s Sportsmanship award. Josh Richards, 2013 World of Outlaws champion, was the recipient of the 2013 RPM Driver of the Year award.