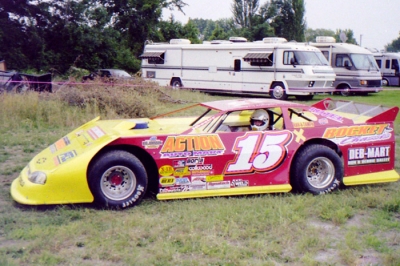 Steve Francis in his 1999 ride. (mikerueferphotos.photoreflect.com)

UNION, Ky. (Aug. 9) — Two World 100 winners, patriarchs of two famous Midwestern dirt racing families, a gruff technical inspector and an ever-present ambassador of the sport are among Saturday's inductees in the Class of 2014 for the National Dirt Late Model Hall of Fame.

The Hall of Fame’s 13th class is being inducted during the 32nd annual Sunoco Race Fuels North-South 100 weekend at Florence Speedway, half-mile dirt oval that hosts the Hall of Fame.

World 100 winners Steve Francis of Ashland, Ky., and Ken Walton of Viola, Iowa, are among five current or former drivers being enshrined along with Denny Bonebrake of Hagerstown, Md., Bob Kosiski of Omaha, Neb. — who will join sons Steve and Joe as a Hall of Famer — and the late Ed Gibbons of Manning, S.C.

Red Farmer, the 81-year-old ringleader of the famed Alabama Gang who has competed in seven decades of NASCAR and dirt racing action, will receive the Hall of Fame’s Sportsman award.

The closer look at the honorees:

Denny Bonebrake: A prolific competitor who is wrapping up his 45th and final season, the 63-year-old Bonebrake captured 10 career track championships including six at his hometown Hagerstown Speedway, one of the nation's most competitive weekly tracks. Driving his own cars as well as for teams such as the Staub Brothers, Ernie Davis and Speedy Hayes, Bonebrake has more than 220 career victories over five decades including two Winchester 200 victories and a triumph in Hagerstown’s Hub City 150. Besides his Hagerstown titles, he earned two apiece at Winchester (Va.) Speedway and Lincoln Speedway in Abbottstown, Pa. He’s the third all-time winningest Hagerstown driver and second on the Winchester list.

Steve Francis: One of Dirt Late Model racing’s steadiest touring drivers over the past 20 years, the 46-year-old is one of only two drivers to capture Eldora Speedway’s World 100 and the Dirt Track World Championship in the same season (1999). He won the 2007 World of Outlaws Late Model Series championship (he’s a four-time series runner-up) and became the first driver to win three straight Renegade Racing Series titles from 1996-’98. Besides running family-owned equipment, Francis has piloted the Rocket Chassis house car, Dale Beitler’s No. 19 and currently the Barry Wright Race Cars house car for team owner Clint Bowyer of NASCAR fame. He’s fifth on the all-time WoO victories list (28), seventh with the Lucas Oil Series and Renegades/STARS, and eighth on the Hav-A-Tampa/Extreme Series list.

Ed Gibbons: One of South Carolina’s best-ever Dirt Late Model racers, Gibbons totaled more than 400 career feature victories starting with the wedge-car era in the early 1980s through the sport’s modern era. He died Feb. 1, 2009, in an automobile accident at age 46. His No. 07, sponsored by the family’s auto parts business, earned victories in the 1980s as rich as $20,000 including the J.W. Hunt 200 at Concord (N.C.) Motor Speedway, the Stick Elliott Memorial at Cherokee (S.C.) Speedway and Centennial 100 at Pennsboro (W.Va.) Speedway. He also captured Concord’s Big 10 championship in 1986. Other victories came with the Hav-A-Tampa Dirt Racing Series, Short Track Auto Racing Stars, and Carolina Clash Super Late Model Series. He won the Carolina Clash title in 2001 and, in his last race, earned $9,000 in the tour’s 2008 finale at Fayetteville (N.C.) Motor Speedway.

Bob Kosiski: The 79-year-old patriarch of Nebraska’s most famous racing family that includes his championship-winning sons Steve, Joe and Ed (and now his grandchildren), the retired Kosiski was a standout racer in his own right, capturing 11 championships at Sunset Speedway. He was also a five-time Nebraska State Fair champion and capturing the Minnesota State Fair 100-lapper in 1960 in St. Paul, Minn. Among major victories in the 1970s were the Mid-Continent Late Model Nationals, the Spring Invitational in Omaha and Festival 100 in Fairmont, Minn. While much of his career came in IMCA action on dirt tracks, he also competed in the 1960 Daytona 500, finishing 36th. Kosiski was inducted into the Nebraska Auto Racing Hall of Fame in 1998.

Ken Walton: His standout career peaked in 1978 with his thrilling victory over Jerry Inmon at Eldora to lead the final six laps of the World 100, making him the fourth Iowan to win in the prestigious event’s first eight years. Other major victories included the 1977 U.S. Dirt Track Nationals in Champaign, Ill., the 1981 Yankee Dirt Track Classic in Cedar Rapids, Iowa, and six wins on the National Speedway Contest Association. Walton won a pair of NSCA titles in 1979 and ’81 and, late in his career, captured the NASCAR Weekly Racing Series Central Regional title in 1984 with 14 victories in 65 starts.

Allan E. Brown: For nearly 30 years he published the National Speedway Directory, a well-worn book that sat on the dashboard of wide-traveling Dirt Late Model teams. The former carpenter took over the publication with listings of more than 1,000 racetracks from Larry Yard at age 32 and traveled to hundreds of racetracks over the next three decades while confirming track directions, connecting with promoters and enjoying the races. For three months each year, Brown and his wife Nancy sent questionnaires, made phone calls and sent emails in a painstaking attention to detail to keep the directory current. He has visited more than 2,100 racetracks and seen racing events at 1,200.

Walter Burson: The late Sherrodsville, Ohio, man served as a Dirt Late Model series official for more than two decades, working from 1987-’03 on the STARS/Renegade tour and on the World of Outlaws Late Model Series from 2004-’09. He died in late ’09 at age 66 after a year-long battle with cancer. Burson had the reputation as a gruff, but friendly and fair, technical inspector who treated drivers equally. The World of Outlaws presented Burson with a Lifetime Achievement Award during the 2009 Firecracker 100 at Lernerville Speedway.

Larry and Penny Eckrich: The Cosgrove couple established one of Iowa’s most successful dirt racing teams in the 1980s with the familiar “Flying 50,” a team that continued to find success with their son Denny behind the wheel up to the current era. The Eckriches captured five consecutive NASCAR Regional Series titles from 1987-’91 with drivers Roger Dolan (who had 33 victories in ’87) and Dale Fischlein capturing one title apiece and Ray Guss Jr. collecting three. Denny Eckrich continued the success more than 20 more years, collecting four Yankee Dirt Track Classic victories at Farley Speedway for the Eckrich’s Precision Performance race shop-sponsored car. Denny isn't the only successful Eckrich. His brothers Dave and Andy are also among Iowa’s winningest drivers during the same period, while another brother Doug turns the wrenches for the family.