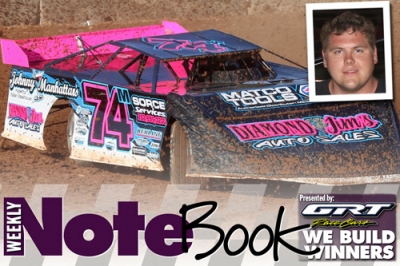 Personally, professionally and racingwise, Mitch McGrath is glad to have a pattern to follow in his uncle and car owner Russ Scheffler.

The 27-year-old McGrath from Neosho, Wis., could do worse than Scheffler, a 12-time Hales Corners Speedway champion who this fall will be inducted into the Southeastern Wisconsin Short Track Hall of Fame.

In his first full season in the Late Model division, McGrath is already a solid contender for the Wisconsin Dirt Late Model Association weekly crown, helping him get featured in DirtonDirt.com’s Weekly Notebook presented by GRT Race Cars.

“The car’s been really good so far,” said McGrath, the modified standout who showed signs of success in just a handful of Late Model starts in the second half of 2013. “We’ll just keep up the hard work and get after it.”

So far, McGrath has a WDLMA-leading three victories and is atop the association’s points, in a tight battle with Tim Buhler and Jim Schmidt. He’s leading the weekly points at Plymouth (Wis.) Dirt Track and is just two points behind Buhler at Manitowoc County Expo Speedway heading into Friday’s $1,500-to-win Manitowoc Late Model June Invitational at one of his home tracks.

McGrath comes to Late Models after six successful modified seasons with more than 30 feature victories and the 2013 Badger Modified Tour championship. The transition to the full-fender division has been relatively smooth.

“You’ve gotta learn to manage tires and stuff like that, but it’s a little easier to go to a Late Model, actually,” McGrath said. “The speed was a little bit tough to get used to, but otherwise, the traction is automatically there. You’re not searching as much.”

Along with facing WDLMA’s spec-engine competition, McGrath even stepped up June 15 to enter his first career UMP DIRTcar Summernationals, finishing 10th in a solid field at Wilmot (Wis.) Raceway as he adjusted to fielding Scheffler’s open-competition engine car.

“(He struggled a little with) inexperience with these guys on these tires, and we didn’t hit the setup quite right. It was fair. I’m happy with it,” McGrath said. “I run with these guys hardly ever, and these kind of tires, we always run a hard spec tire, and I run a spec motor, so I don’t run an open motor all that often. Just a combination of everything … I’m happy with it.”

Scheffler, of Waukesha, Wis., is a former WDLMA champion and has been among Wisconsin’s winningest drivers over the last 20 seasons, with occasional forays to Florida Speedweeks and to major races in northern Illinois. The owner and operator of Suburban Drywall’s career is something McGrath admires, and something he’d like to duplicate.

“That’s my goal. He’s my hero,” McGrath said. “As far as racing goes, he concentrates on business first, and then goes racing, and he’s always been very successful at it. He’s my idol.

• Michigan had a two-race winner June 13-14 with David Hilliker of Midland, Mich., grabbing victories at Tri-City Motor Speedway in Auburn and Merritt Speedway.

• Iowa also had a four race winner over five day with IMCA standout Justin Kay of Wheatland, who won June 13 at Davenport Speedway, June 14 at Jackson County Speedway, stayed perfect at Dubuque Speedway on June 15 and won June 17 on the undercard of the UMP DIRTcar Summernationals event at Farley Speedway.

• Continuing a hot streak that started in early May, Victor Lee of Danville, Ky., earned $3,000 with his June 14 victory in 201 Speedway’s Walter “Peg” Combs Memorial. He topped Dustin Linville and Michael Wright, who also led in the 40-lapper.

• Devin Moran of Dresden, Ohio, won at a pair of sometimes-confused Ohio ovals. He won June 13 at Marietta’s Legendary Hilltop Speedway, then on June 14 at Millersburg’s Hilltop Speedway.

• In Crate Late Model action in Kentucky, Tait Davenport of Benton nabbed a $3,000 victory at Kentucky Lake Motor Speedway on June 14, and followed it up with a UMP Crate Speedweeks victory at Windy Hollow Speedway near Owensboro on June 15.

• At Oakshade Raceway, Michigan native Rusty Schlenk raced to victory June 14 for his third in a row at the track in Wauseon, Ohio. He also won the previous night at I-96 Speedway in Lake Odessa, Mich.

WISSOTA (Limited Late Models): Scott Ward of Watertown, S.D., is back on top of a pair of Minnesota drivers with 586 points. Zach Wohlers (495) and Harry Hanson (467) are giving chase.

NeSmith Chevrolet (Crate Late Models): Adam Gauldin of Talladega, Ala., had his 10th straight week with a top-five finish and has 570 points to lead Daniel Bridgmon (523) and Shannon Lee (499).

Kentucky Lake Motor Speedway, Calvert City, Ky. (June 21): UMP DIRTcar Super Late Models chase a $3,000-to-win purse in a race that, if the track can draw larger car counts than normal, would start up to 30 cars. Crate Late Models and the Kentucky Vintage Racing Association are among other divisions.