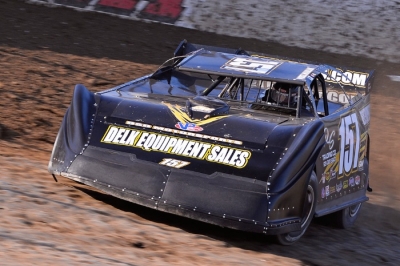 What happened Thursday?: In twin 25-lap features after the 78-car was field for two complete racing programs, Jimmy Owens of Newport, Tenn., outdueled Bobby Pierce of Oakwood, Ill., in the opener, while Kent Robinson led flag-to-flag in the finale. Both picked up $2,500.

What happened Friday?: In a nearly identical twin-feature format, Brian Birkhofer of Muscatine, Iowa, nipped Rick Eckert of York, Pa., while Dale McDowell of Chickamauga, Ga, led the last half of the finale. Birkhofer and McDowell earned $5,000.

What happens Saturday?: The best qualifying from Thursday and Friday sessions were used, with a five-car inversion, to set six heat race lineups that start at 7 p.m. Three drivers apiece transfer along with six drivers from a pair of consolation races to set the 28-car field for the $100,000-to-win weekend finale, a 100-lapper. Four provisional starting spots are available to the two fastest qualifiers and two drivers with best average finishes in preliminary features who don’t make the starting field otherwise.

Geographic balance: Two drivers north of the Mason-Dixon line (Robinson and Birkhofer) won two preliminary features while the others went to Southern drivers (Owens and McDowell). Only five drivers from Northern states have won the Dream.

Guaranteed starters: Mike Marlar of Winfield, Tenn., and Brad Neat of Dunnville, Ky. — the two fastest qualifiers and a pair of graduates from the old Battle of the Bluegrass DirtCar Series — will start on the ninth row of the 100-lapper via provisionals if they fail to transfer through heat races. Potentially guaranteed to start on the 14th row, if they don’t transfer otherwise, is Rick Eckert, Scott Bloomquist and Kent Robinson (in order of time trials) who had an average finish of 3.0 between their preliminary race finishes.

More practice time: Dream competitors will each get a brief hot-lap session at 6 p.m., with heat races set to roll at 7 p.m.