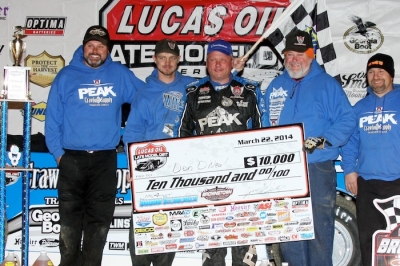 BROWNSTOWN, Ind. (March 22) — No matter the chassis brand, the number, the color scheme, the car owner or anything else, there’s one constant for Don O’Neal at Brownstown Speedway: He’ll eventually end up in victory lane.

The 49-year-old driver from Martinsville, Ind., had been looking for a victory since climbing into Clint Bowyer Racing’s No. 5 and joining the Barry Wright Race Cars house, and a short trip to the Indiana Icebreaker at the quarter-mile oval in southern Indiana gave him his first checkered flag of 2014. | Video | Slideshow

“Everybody’s worked hard so far this year, and I knew we’d get us a win,” said O’Neal, a two-time track champion who has won every major event at Brownstown. “I thought it would come a little quicker than what it’d come, but to get it here at home makes it even more special.”

O’Neal went around polesitter Eddie Carrier Jr. of Salt Rock, W.Va., on the 11th lap and survived a tricky stretch of racing behind several lapped cars before pulling away late in the 50-lap feature. He pocketed $10,000 for his first Lucas Oil Late Model Dirt Series victory of the season and 34th of his career.

“To run second to Don O’Neal here, you’re not running running second to a shabby guy,” Carrier said. “I mean, this is one of his home tracks and he always runs good here no matter whatever car he’s in.”

Third-place finisher Steve Francis of Ashland, Ky., O’Neal’s CBR teammate who rallied from his 11th starting spot, knew he was in good company, too, on a chilly night in front of a standing-room only crowd.

“Any time you come to Brownstown and Don beats you, you didn’t have a real bad night,” Francis said.

Not only did O’Neal earn his first victory since leaving the MasterSbilt Race Cars house car team last fall, he wrestled the Lucas Oil Series points lead from Earl Pearson Jr. of Jacksonville, Fla., who finished eighth. O’Neal unofficially has 1,095 points followed by Pearson (1,070) and Francis (1,065).

Scott Bloomquist of Mooresburg, Tenn., who started outside the front row, ran in the top five all the way and settled for fourth while seventh-starting Kent Robinson of Bloomington, Ind., was fifth for his best big-race run in a Late Model at Brownstown.

Sixth-finishing Bobby Pierce of Oakwood, Ill., started ninth and ran as high as third, but he was shuffled back after contact with Carrier in turn one while trying to take the second spot, then later clipped an infield tire barrier that disabled the steering of his left-front wheel.

Carrier, the night’s fast qualifier and winner of the first heat race, got the jump from the pole in the 50-lap feature, but O’Neal elbowed past Bloomquist in turn three on the second lap and quickly challenged the leader.

“I knew after the heat race we had a good enough race car to win,” O’Neal said. “We just had to get the right tires on it for the feature, and evidently we did.”

O’Neal used the middle groove to work around the low-running Carrier to take command, but slower traffic loomed a few laps later and O’Neal spent more than 25 laps dealing with it while Carrier, Bloomquist, Pierce, Pearson and others dueled behind him.

Lap-after-lap O’Neal tried to work past Dennis Erb Jr. and Jeremy Hines, but it wasn’t until the final 10 laps he got some clear racetrack and put a pair of slower cars between his blue No. 5 and closest pursuers.

“You just couldn’t get a good enough run on the outside to clear” the slower cars, O’Neal said. “You could make up a little ground in (turns) three and four around the top, but in (turns) one and two you’d just lose it all on the outside there. I finally just got back down there on the bottom and waited for 'em to make a mistake.”

Carrier, who posted his best-ever finish at Brownstown, figured O’Neal made a better tire choice for the first Lucas Oil Series event since Florida Speedweeks.

“Donnie and them kind of beat us on the right-rear tire. We went a little softer than they did, and that kind of beat us there at the end,” Carrier said. “But I started trying to move around there closer to the end of the race, trying to get down more on the track on the straightaways and maybe get a little bit of traction there, and maybe get up there to challenge him.”

Francis had his problems in prelims and "we played catch up all night,” he said. “We had a real good car. We’d like to have had a caution or two.”

How would a yellow flag have played out for Francis?

“You never know … I might’ve got stuck on the outside there (on a restart), and I wasn’t as good as Scott (Bloomquist) and some of those guys on the outside, but we could rotate that bottom pretty good. You never know,” he said. “I’d like to have had one earlier in the race where we’d have had a little more chance to move around.”

Notes: O’Neal’s Clint Bowyer Race Barry Wright Race Cars house car has a Clements Automotive engine and sponsorship from Peak Antifreeze and Motor Oil, Crawford Supply, Traeger Grills, Cometic Gasket, Ohlins and Georgia Boot. … O’Neal also won the Indiana Icebreaker in 1999, 2000, ’03 and ’12. … Jeep Van Wormer ran as high as third early but slipped back to finish seventh. … Making his first start of the season in a new Rocket Chassis, Shannon Babb of Moweaqua, Ill., was among the fastest qualifiers, but his night was effectively over when his car’s nosepiece folded under after he started on the pole of a heat race. … The Midwest’s traditional first major Dirt Late Model event of the season drew a huge crowd that saw the concession stand line stretch the length of the frontstretch at times. … The 50-50 payoff was $1,142. … West Virginia driver Tim Dohm was assisted in the pits by Jackie Boggs with his Swartz Race Car. …Greg Johnson’s car got upside down in the non-qualifiers’ dash for local drivers, but he wasn’t injured. … Besides Babb and Johnson, among drivers failing to make the feature: Dustin Linville, Frank Heckenast Jr., John Gill (who fielded a No. 75 Rocket Chassis owned by Terry Eaglin), Tim Prince, opening-night winner Joe Janowski, Justin Rattliff and Mike Benedum. …. Former Indiana Icebreaker winner Terry Casey was also a DNS while fielding the backup car of Ricky Weiss. ... Kentucky driver Josh McGuire, who suffered serious neck injuries in a racing accident last fall, was among pitside observers. He caught a ride in the Lucas Oil pace truck before the feature. … Among five drivers making their Brownstown debuts, Weaver, Weiss, Devin Moran and Jason Hughes started the feature race (Jason Papich didn’t). … Next up for the Lucas Oil competitors is an April 4-6 weekend in three states at Jackson Motor Speedway in Byram, Miss., ArkLaTex Speedway in Vivian, La., and Outlaw Motorsports Park in Muskogee, Okla. Each race pays $10,000-to-win.