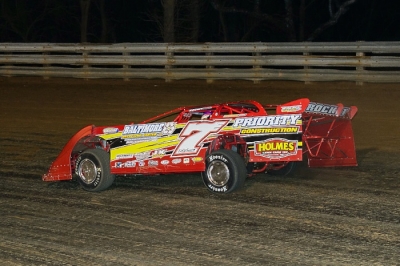 Rick Eckert led all but one lap at Hagerstown. (wrtspeedwerx.com)

Eckert, whose engine was missing during preliminaries, seized the lead from Kenny Moreland of Waldorf, Md., on an opening-lap restart and led the final 24 laps for the $2,500 prize and his 22th career victory at the half-mile speedplant.

“The race track was really nice,” Eckert said. “There was a top and a bottom and the middle was just as good. There really wasn’t a dominant way. I thought the bottom was going to be better. Once I had to get out there and start on the outside I could carry my speed through one and I thought I’d stay up there.

“The guy inside either runs over you or has to check up and not run over you and Kenny is a good racer. I didn’t figure there was a problem taking the outside of him. I got a good start both times out there.”

With a four-car invert, Moreland and Jason Covert started from the front row with a first-turn incident occurring with third-starting J.T. Spence making oncoming traffic scatter with Dominic Defino getting the worst of the deal. On the restart, Eckert moved to third and quickly slipped into the runner-up spot behind Moreland on the opening lap.

When Nathan Durboraw rolled to a stop on the restart, Eckert was on the outside for the next restart and quickly overpowered Moreland and took command. He was nearly five seconds ahead and closing on the rear of the field when Matt Parks came to a stop on lap eight.

Eckert chose the outside lane for the double-file restart and took off while Covert passed Moreland the next lap followed by Dan Stone who moved into third two laps later.

Eckert continued to hold the best hand and started moving through rear traffic on the 18th lap. Although Covert was closing, Eckert showed the way to the finish and won by 1.364 seconds over Covert and Stone.

“The motor missed the whole heat race I thought it was something I did,” Eckert said. ”Paul said ‘I’ll tell you what, go out there and gas it up and if it seems OK, run it, if it don’t pull in.’ I gassed up on that start and it went smooth and fine.”