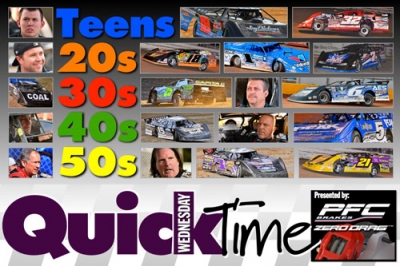 In a sport with a wide window or reaching a prime age, it’s common to consider the importance a winner's age, especially when a teen-ager enjoys his first success, or when a driver north of 50 continues to collect big paychecks. Splitting drivers by decades, who are currently the top five drivers in each age range? Here are my choices with ages listed for each driver:

Bobby Pierce, Oakwood, Ill. (17): Far and away topping this age group, Pierce has a few years to take a crack at Brandon Sheppard’s record as the youngest UMP DIRTcar Summernationals champion.

Devin Moran, Dresden, Ohio (19): Already with a Lucas Oil victory at his home track, Devin should only get better with Hall of Fame dad Donnie edging toward a crew chief role.

Chase Junghans, Manhattan, Kan. (18): Promising performer getting mentorship from Shane Clanton that should make him better.

Josh Richards, Shinnston, W.Va. (26): Out of action with an undisclosed medical condition, Richards is no longer the youngest, but he’s among the best of any age.

John Blankenship, Williamson, W.Va. (32): Once a twentysomething who had an air of disinterest, Blankenship has come into his own and last season became the youngest World 100 winner in six years.

Shane Clanton, Zebulon, Ga. (38): Twice a big winner at Eldora, he’s still looking for his first WoO title and isn’t afraid to make bold career moves in his effort to get it.

Chris Madden, Gray Court, S.C. (39): Currently the sport’s hottest driver, he’s been solid since bursting on the scene 15 years ago. He has what it takes to win at Eldora for a career-making victory.

Jonathan Davenport, Blairsville, Ga. (30): He's rebounded from the head-scratching lack of success with Clint Bowyer Racing in 2012 and intent on making his second go-round with the Rumleys unforgettable.

Jason Feger, Bloomington, Ill. (35): A tough call picking him over McCreadie, Marlar, Shirley and others, but his maturation in 2013 signals more big-race success is in his future.

Darrell Lanigan, Union, Ky. (43): His steady climb to stardom has reached its peak with two World of Outlaws titles and the reputation for clicking off double-figure victory totals every season.

Steve Francis, Ashland, Ky. (46): A steady driver who seems like he’s been around long enough to be older, Francis isn’t always in the limelight but he’s always in the mix.

Brian Birkhofer, Muscatine, Iowa (42): Had ups and downs between his World 100 victories, which were separated by 10 years, but many drivers do lots of winning in their 40s.

Don O’Neal, Martinsville, Ind. (49): On the cusp of 50, O’Neal started clicking off crown jewels with regularity. His throttle-mashing can still leave youngsters in his dust.

Scott Bloomquist, Mooresburg, Tenn. (50): Can the flashy driver who arrived on the scene with flowing locks and immense talent really be 50? We’re all getting older, and Bloomquist is still getting it done.

Ronnie Johnson, Chattanooga, Tenn. (58): Most of his racing is in Limiteds and Crates these days, but the two-time DTWC winner can still get it done.

Davey Johnson, Latrobe, Pa. (50): The three-time champion on the old STARS series going for it again in his 50s.

With Chris Madden of Gray Court, S.C., winning two of the first three National Dirt Racing League events — and finishing second in another to grab the points lead on the second-year national tour — speculation immediately began on whether Madden would chase the tour’s $65,000 championship.

It would be Madden’s first national tour run, and quite a different path for the 38-year-old driver whose successful points-chasing has been limited to the Southeast with the Southern All Stars (titles in 2005-’06) and Schaeffer Oil Southern Nationals (titles in 2007-’09, ’11-’12).

In reviewing national touring records over the past 20 years, it’s rare for a driver to become among the first multiple-points race winners and not stick with the series all year long. Most drivers who became the first multiple-race winner in events (not counting February’s Speedweeks events) were tour regulars.

But if Madden elects to skip a full-time run in NDRL events, it wouldn’t be without precedent. Six times in the past 13 seasons drivers who didn’t stick with a series for entire season were the tour’s first multiple-race winners beginning with March races. Here’s the list:

The move of reigning and three-time Lucas Oil champ Jimmy Owens to Darrell Lanigan’s Club 29 Race Cars follows some key off-season chassis switches and, considering that stature of Owens and Lanigan, could go down as among the biggest switches in Dirt Late Model history (One caveat: Owens plans at continue to field his Bloomquist Race Cars in some events).

Other recent switches are notable — Don O’Neal moving to Barry Wright Race Cars from MasterSbilt’s house car, and Billy Moyer’s late-career change to Longhorn Chassis from Victory Circle — but history will decide the import of those moves.

Plenty of drivers over their careers “changed chassis like underwear,” said historian Bob Markos, who contributed to this post, so switches among drivers who have bounced around aren’t as significant. But here’s a list at five key chassis switches that turned some heads:

1992: Billy Moyer of Batesville, Ark., left the Larry Shaw Race Cars house car and showed up at Florida Speedweeks with a Rayburn Race Car he eventually switched to full time.

1993: After dramatic early-career success with MasterSBilt Race Cars, Scott Bloomquist goes to Warrior in '93 and the next season lands in the Barry Wright house car ride that catapulted him to Hav-A-Tampa Series domination.

1998: After tremendously successful seasons in the GRT house car through the 1990s, Bill Frye of Greenbrier, Ark., switched briefly to a Rayburn then landed in a Warrior, winning his sixth start in that chassis.

2007: After a few years of switching among chassis, Billy Moyer jumps into a California-based Victory Circle Race car that propelled him to a rejuvenation, including stellar 2010 campaign.

After catching the video of Morgan Bagley’s recent victory at Texas Motor Speedway’s Dirt Track, then stumbling onto You Tube video from the 1997 Hav-A-Tampa Series action from Chatham, La. (thanks for the Facebook tip, Kevin Gundaker!), I suddenly how much I miss slick-track racing.

Sure, I get a dose of a slicked-over racing surface now and again, but watching SUPR drivers struggle to find traction near Fort Worth (where for my first few visits the brutal surface was anything but slick) and then seeing the Hav-A-Tampa drivers slip and slide around Super Bee Speedway was refreshing.

I realize there’s a wide gulf between me, a lover of dry-slick racing, and fans that relish the hooked-up, high-speed action of a heavy racing surface. But the increased traction and slipstream aerodynamics of today’s cars means we see the latter more than the former.

My first tastes of dry-slick racing came in the heyday of Brownstown (Ind.) Speedway and I satisfied my thirsts with many trips to West Plains (Mo.) Motor Speedway. Nostalgia grips us all, now and then, but I wouldn’t mind a trip back (or back in time?) to a super-slick West Plains one day.

Turn 3: Tweets of the Week

Kyle Heckman ‏@kyle_heckman: Got to meet my hero today @ClintBowyer and talk a little dirt racing. Darn nice guy. Hoping to see more of him in the @peakauto #PeakSCD

Dirt Racing ‏@dirtracing_97: I love the sound of a Dirt Late Model! #dirtlatemodel

March 11, 1984: All-time winningest Southern All Star driver Ronnie Johnson of Chattanooga, Tenn., raced to victory at Green Valley Speedway in Glencoe, Ala., the first of his career on the B.J. Parker-founded tour.

March 12, 2001: Wellman S.M. Lehman, 73, an original investor and board member of Wayne County Speedway in Orrville, Ohio, died following a lengthy illness. He served as the track’s promoter from 1971-’84.

March 7, 2005: Rob Mapes, owner of Beech Creek Racing that has fielded cars for Pennsylvania racer Scott Haus for many years, died. He was 48.

March 13, 2009: The announcement was made that Manzanita Speedway in Phoenix, Ariz., would close within a month’s time. The historic track opened in 1951 and was among the West’s most famous dirt ovals.

• Fewer than half of 23 starters will return for the final 31 laps of Clarksville (Tenn.) Speedway’s Tuckassee Toilet Bowl Classic, halted by rain with Brian Shirley leading after nine laps.

• Casey Roberts will nab a victory in the Ultimate Series opener at Lavonia (Ga.) Speedway.

(Last week: One of three predictions correct; two rained out)