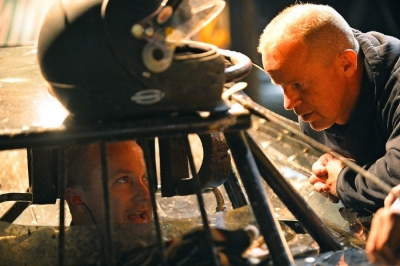 And now, they’re on the same chassis team.

“That’s what I’m looking forward to,” Owens said of launching a working relationship with Lanigan. “We’ve both been real successful in doing this, and got a lot of — I wouldn’t say the same driving styles — but a lot of the same characteristics.

“Obviously we’re not too far off. I got in his car down at Volusia (Speedway Park in Barberville, Fla., on Feb. 18) and was pretty good.”

While Owens and Lanigan have quietly developed a friendship in recent years — keen observers took note of their penchant for parking near each other in the pit area when they would compete in the same race — it was Owens’s unpublicized-in-advance cameo behind the wheel of Lanigan’s personal car last month that revealed a budding partnership. With Owens’s No. 20 decal placed on the door of the Club 29 machine that Lanigan designed with veteran crew chief Ronnie Stuckey, Owens went out on the Volusia half-mile and promptly turned the overall fastest qualifying lap for the evening’s UMP DIRTcar-sanctioned program.

The remainder of Owens’s one-night stand in Lanigan’s car didn’t go as well — he qualified by winning a B-Main and was an early retiree from the 30-lap feature, finishing 23rd — but the fast time did represent the highlight of his week at Volusia. He struggled with his own Bloomquist Race Car in his two WoO starts during the DIRTcar Nationals by Summit; hampered by electrical problems, he failed to qualify Feb. 20 and finished 27th on Feb. 22.

“Darrell and I have been, you know, talking about me driving (Lanigan’s Club 29 car) a time or two,” Owens said of his surprise appearance in Lanigan’s car that was the talk of Volusia’s pit area. “I got in it, and it did good. I was pleased with the car. It was better than I expected.

“We went out and we were good every time we was out in it except for our heat race, and we were good there — the track was wide open and it was hard to do any racing on it. I was surprised how comfortable I was in it, just getting in it and going. That was an eye-opener, too.”

Owens didn’t have a deal to purchase one of Lanigan’s Club 29 pieces in place when he took his test drive, but the experience stepped up his interest in one of the new chassis on the Dirt Late Model block. He continued conversations with Lanigan and, in conjunction with his car owner, decided to join Club 29 by ordering a single machine.

After seven successful years campaigning Bloomquist Race Cars — seven extremely successful years, highlighted by victories in the Show-Me 100 (three times), North-South 100 (three), World 100 (two), Dream, Topless 100 and Dirt Track World Championship — was there one specific factor that prompted Owens to pull the trigger and add a Club 29 Race Car to his 2014 arsenal? He spoke only in general terms on that topic.

“Nothing really,” said Owens. “Maybe to have basically a team car, to have someone to work with. We’ve kind of been by ourselves the last probably five years or so.

“We’re happy with our Bloomquist stuff, and we’re still going to run it. Whichever car we feel like is going to get the job done at whatever track is what I want to be in.”

Indeed, Owens still has five Bloomquist cars at his disposal — and unless he’s “really, really impressed” with the Club 29 car, he said he’ll probably run a Bloomquist mount at Lucas Oil Speedway in Wheatland, Mo., on May 23-24 when he seeks a fourth consecutive triumph in the Show-Me 100. He might debut his Club 29 car this weekend at Volunteer Speedway in Bulls Gap, Tenn., if his crew can finish it up (he picked it up Monday at Lanigan’s shop), but more likely will bring it out in the next Lucas Oil Series event, on March 22 at Brownstown (Ind.) Speedway.

In the final analysis, Owens is dipping his toe into Lanigan’s Club 29 water in hopes of stepping up his performance.

“It’s definitely a try-to-remain-good kind of thing,” Owens said. “You look at our seasons throughout the past five or six years and, yeah, we’re still having great years that anyone would kill (to have), but you see it steadily trending downward. And even last year, our consistency in finishes were just terrible compared to years before. We’ve gotta get back on the game and get back after it.

“I kind of like being alone, too, doing our own thing, but at the same time, everybody is racing together and you can see that sharing information with other guys is accelerating everyone’s program. I mean, look how good Earl (Pearson Jr.) and those guys are running now that they’ve got two or three more people on board (with Longhorn Chassis). And of course you see the success Rocket (Chassis) has and everybody has that’s doing all that. To me it’s going to be a help to be racing with someone.”

And Lanigan seems to be the perfect match for Owens. The two men share many traits. Both are in their early 40s — Lanigan will turn 44 in June, Owens turned 42 last month. Both have quiet personalities, preferring to keep to themselves. Both have raced for more than two decades. Both have national profiles and have arguably been Dirt Late Model racing’s top performers over the past three years.

“Our situations are pretty much similar,” said Lanigan, who scored his first wins in his Club 29 car last month, capturing two victories during Florida Speedweeks. “He’s kind of a quiet guy at the track, like I am. Neither of us is a big talker. Our personalities are about the same and I think we race a similar way.

“We get along good and I think that’s definitely a big reason why I think this is gonna be a good deal.”

Lanigan sees Owens’s arrival as a major growth spurt for his burgeoning business. Most of Lanigan’s initial customers were younger, up-and-coming talents — guys like Kent Robinson of Bloomington, Ind., Tony Jackson Jr. of Lebanon, Mo., and Brandon Overton of Appleton, Ga. — so adding savvy vets like Owens and Vienna, W.Va.’s Steve Shaver, who next month will debut a Troy Beard-owned Club 29 car, pumps up the brand.

“It’s a great asset to Club 29 to have him come on board,” Lanigan said of Owens. “For him to be running the Lucas Series and us to be running the Outlaw deal, it really helps out. We can throw stuff back and forth between us and that’s gonna really help us down the road.

“Having guys like Jimmy and Shaver will definitely speed up the learning process for other guys in our cars. We have some good guys out there, but experience definitely means a lot with these things. With Jimmy being there now and giving these other guys hope by running well, that will be a big help.”

Lanigan and Owens, of course, will be in regular contact throughout the season. That’s part of being part of the same team.

“We talk a little bit here and there, but not a whole lot because neither one of us talk a whole lot,” Owens said when asked how often he’s spoken with Lanigan in the past. “Once I get this car (running) and stuff, I’ll be conversing. I didn’t really want to pry into his business or nothing like that until I was sure if we were doing to run the car or not. I’m sure we’ll be talking a lot more now.”