Madden rises to No. 3 spot in power rankings 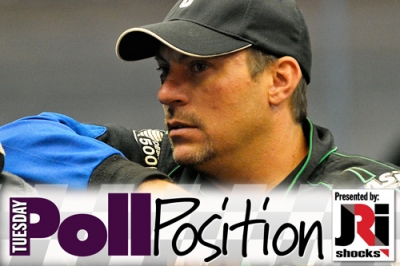 For the second consecutive week, Chris Madden of Gray Court, S.C., is on the move up DirtonDirt.com’s Top 25 driver rankings. Following a $12,500 victory and a runner-up finish in Smoky Mountain's National Dirt Racing League doubleheader, Madden (pictured) received a poll-high 11 first-place votes to climb four spots to No. 3 overall in the power poll presented by JRi Shocks.

Dale McDowell of Chickamauga, Ga., and Billy Moyer Jr. of Batesville, Ark., join Madden on the move this week. McDowell, who earned $7,500 in Friday’s NDRL opener at the Maryville, Tenn., oval, also ascended four spots before settling at No. 8 in the rankings, while Moyer climbed three spots to No. 18 after leading the first 43 circuits of Smoky Mountain’s finale won by Madden.

Darrell Lanigan of Union, Ky., sits atop the poll for the third consecutive week after gathering 10 first-place votes and 717 total points. Lanigan, who was idle once again, is followed by Scott Bloomquist of Mooresburg, Tenn., while the white-hot Madden, Brandon Sheppard of New Berlin, Ill, and Billy Moyer of Batesville, Ark., complete the top five.

New to the power rankings this week are Kent Robinson of Bloomington, Ind., and Mike Marlar of Winfield, Tenn. Robinson makes his first appearance of the season at No. 24, while Marlar debuts at No. 25.

DirtonDirt.com invited more than 30 media members and drivers along with track and series representatives to vote in this season’s rankings. Thirty submitted ballots this week. Weekly polls continues through mid-November.

Comment: Likely off until the end of March when the World of Outlaws venture south to Lone Star and I-30. Series points: 1st (World of Outlaws). Last week's ranking: 1st (nc)

Comment: Runs away and hides from the field in Smoky Mountain’s opener, ultimately winning by over six seconds. Series points: None. Last week's ranking: 12th (+4)

Comment: Mired in the middle of the pack both nights at Smoky Mountain and buried in the NDRL point standings. Series points: 2nd (Lucas Oil). Last week's ranking: 6th (-3)

Comment: Unsure when or where he’ll return to the track next after a strong Speedweeks start in his new Rockets. Series points: 3rd (World of Outlaws). Last week's ranking: 9th (-2)

Comment: Notches a pair of seventh-place runs at Smoky Mountain, but unlike himself with no victories in 17 starts thus far. Series points: 3rd (Lucas Oil). Last week's ranking: 11th (-1)

Comment: The busiest of all Speedweeks drivers is taking some time off to begin the month of March. Series points: None. Last week's ranking: 16th (nc)

Comment: Will hop out from behind the wheel to promote this weekend’s Spring Nationals doubleheader at Volunteer. Series points: 8th (Lucas Oil). Last week's ranking: 22nd (+2)

Comment: Not the weekend he hoped for at Smoky Mountain, but does qualify for both NDRL features. Series points: None. Last week's ranking: 23rd (nc)

Editor’s note: The top 25 drivers are determined by a points system with 25 points for a first-place vote, 24 points for a second-place vote and so on through a single point for a 25th-place vote. The voting panel is made up of media members, drivers and track and series representatives.