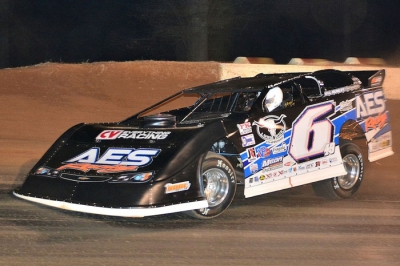 PHENIX CITY, Ala. (Feb. 28) — After setting fast time and winning a heat race Friday, Jonathan Davenport of Blairsville, Ga., will go for a sweep Saturday at the 17th annual Bama Bash at East Alabama Motor Speedway.

Davenport was among heat race winners Chris Madden of Gray Court, S.C., Steve Francis of Ashland, Ky., and Kent Robinson of Bloomington, Ind. The four drivers will redraw Saturday for starting spots for the first two rows of the 75-lap main event on the National Dirt Racing League that will pay $17,017 to the winner. | Video | Slideshow

Davenport, who won his 2014 debut in his K&L Rumley Enterprises No. 6 three weeks earlier, likes his chances lining up Saturday evening.

“This car’s really good. We came (Thursday) night to practice, and we had a little bit of fuel pressure problems, so we didn’t really get to make any laps in a slicker condition (like) we qualified at,” he said. “I’m really happy with the car. It’s a type of racetrack I haven’t got to drive it on yet. But we’ve got some adjustments to make. We’re not really, really great right there, but I think we’ve got something we can adjust on and win with with for sure with this Longhorn Chassis.”

Notes: The Bama Bash moved to EAMS after the closing of Green Valley Speedway in Glencoe, Ala. … The second-year NDRL is sanctioning the event for the first time. … Each heat winner won from the pole Friday. … More than 200 race cars among seven divisions are in action during the weekend at EAMS; both Crate and Limited Late Models are competing on the undercard.