From event and correspondent reports 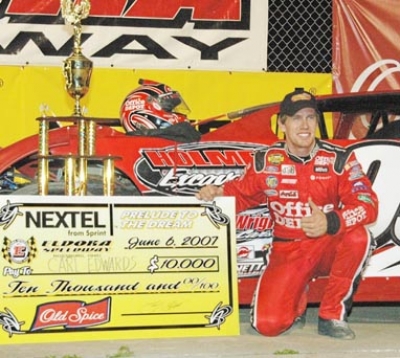 Wednesday's fourth annual Old Spice Prelude to the Dream boasts huge NASCAR stars driving Dirt Late Models. But it's not really a NASCAR race. And it's not a huge Dirt Late Model race, either. The race, with proceeds from the HBO Pay-Per-View action going toward the goal of raising $1 million to support construction of Victory Junction Gang Camp and Tony Stewart Foundation, is something different altogether said Eldora Speedway owner Tony Stewart, who hosts the event in Rossburg, Ohio.

“When the drivers were interviewed on the P.A., there was a different sound and a different tone to all of their voices vs. when everyone hears us interviewed at a NASCAR race," Stewart said of last year's event. "It was a more relaxed setting. Everybody was cutting up and having a good time. Nobody was worried about making the Chase or where they were in the point standings or anything like that. Everybody was there to have a good time and I think the driver’s attitudes when they got there set the tone for all the fans and they knew, ‘Hey, this isn’t going to be the World 100 or this isn’t going to be The Dream.’ It’s not necessarily going to be that kind of a race, but we’re bringing 25 guys here and you’re going to get a chance to see them do something that they don’t do every day.

The back-flipping Carl Edwards — who comes from dirt racing roots — had perhaps the most fun in grabbing the checkered flag, and he's back this year with the roster that includes Stewart, Jimmie Johnson, Jeff Gordon, Kasey Kahne and Kyle Busch. — Kellye Arning

With more than 20,000 people in the grandstands and thousands of others tuning into the HBO Pay-Per-View broadcast of Prelude, there will be plenty of attention paid to the cars and stars as they lap the half-mile dirt oval that is Eldora Speedway. But long before the superstars descend upon Eldora, the unsung heroes of the historic dirt track set the stage.

“What people don’t see is that at a dirt track, it’s not a matter of just putting dirt on it the day of the race,” Stewart said. “It’s Larry Kemp and Larry Boos, and Earl Baltes’ grandson Chad, who do the majority of the work during the week. It’s a seven-day-a-week job taking care of a dirt track. You want to get moisture in it early in the week to where, no matter what the conditions are on race day, you’re able to adjust how much water you put on it on race day, so when nighttime comes, that moisture keeps coming out.”

Stewart’s staff prepares the track a bit differently for the Prelude. Typically, the Eldora staff would prepare the track with plenty of water to be soft and tacky, which helps produce fast lap times. But with some of the Prelude drivers having little to no dirt track experience, less moisture is expected, slowing the speeds and leveling the playing field.

“Last year we dried the track out a little bit, so it was hard and slick from the top to the bottom and the pace was slower so the guys weren’t holding their breath and it was a lot easier for them to drive,” Stewart said. "Especially for the guys that are new to the dirt track scene, it’s a little easier for them to get used to since the pace isn’t so fast. It makes all the guys driving those cars feel a lot more comfortable. And for what we’re doing with the television aspect, it’s a lot easier to leave it slow with a lot less dust.”

“Guys that take care of dirt tracks across the country are really unsung heroes of the sport,” Stewart said. “There’s so much science about how much clay content you have in the dirt, and that’s what makes every dirt track unique. You could have two guys that owned two different racetracks, but they have to prepare them differently for the conditions where the races are as good as possible. What we do at Eldora isn’t necessarily the same thing that someone else does 30 miles down the road that has the same dirt as us. These promoters and track operators that take care of these race tracks and do a lot of work should be proud of what they do.” — Kellye Arning

Dirt Late Model standout Steve Francis and his car owner Dale Beitler are excited about the June 6-7 $100,000-to-Dream at Eldora Speedway, they'll both be busy the entire week in fielding cars for NASCAR Sprint Cup Series stars in Wednesday's Prelude. Beitler is teamed with recent Sprint Cup All-Star race and Coca-Cola 600 winner Kasey Kahne, while Francis will field the Alltel No. 12 that Daytona 500 champion Ryan Newman will drive in the special event.

Beitler, of West Friendsville, Md., relishes the opportunity to participate in the Prelude with Kahne for a second consecutive year. Kahne will actually drive the same Rocket car that Casebolt steered to victory in last year’s Dream, albeit with a Budweiser red-dominated paint scheme and Kahne’s No. 9 on its body. “The Prelude is a bunch of fun for me,” said Beitler. “Kasey’s fun and easy to deal with, and he tells you what you need with the car. It’s just an enjoyable night for me.” — Kevin Kovac

With groundbreaking set for late September on the long-awaited second edition of the Victory Junction Gang Camp on the outskirts of Kansas City, the Prelude has set a goal of generating $1 million to benefit the project. The event will have a significant charitable impact, as the funds generated by the live HBO Pay-Per-View broadcast of the popular event will benefit the construction of Victory Junction Gang Camp-Kansas City for chronically ill children, as well as the Tony Stewart Foundation.

“Last year, we raised $800,000 for Victory Junction and the Tony Stewart Foundation, and this year we believe we can surpass that amount with the incredible support we continue to get from race fans and the NASCAR community,” Stewart said. “The fans in the stands who have packed the place each of the three years, as well as the subscribers of the HBO Pay-Per-View broadcast, can count on seeing one of the most fun and competitive shows of the year. Not only will they be getting more than their money’s worth, they’ll be helping out a couple of incredibly great causes.”

The original Victory Junction Gang Camp in Randleman, N.C., founded in 2004 by NASCAR driver Kyle Petty and his wife Pattie as a tribute to their late son, Adam, has become an overwhelming success. So much so that the Pettys, who hosted nearly 4,000 chronically ill children and their families in 2007 – primarily from the Southeast but also from the Midwest and West – decided to act on the need for a second location late last year. Wyandotte County in suburban Kansas City, Kan., evolved into the clear choice due, in large part, to the local business community, which embraced the Victory Junction Gang Camp concept and offered numerous site options in the vicinity of Kansas Speedway, where NASCAR races each fall.

“It’s just unbelievable how everything has come together to help make this a reality,” said Pattie Petty. “The support we get thanks to events like the Old Spice Prelude to the Dream will help us make Victory Junction Gang Camp-Kansas City bigger, better, faster and stronger than ever before." — Kellye Arning

Curb Records recording artist Lee Brice is scheduled to sing The Star-Spangled Banner prior to the Prelude. Brice, a native of Sumter, S.C., will release his debut album Picture of Me in 2008. The album includes top-25 country hits “She Ain’t Right” and “Happy Endings.” “I am so excited and honored to have been asked to do this event,” Brice said. “I love racing and can’t wait to see these drivers in person, competing.” — Kellye Arning

Old Spice Prelude to the Dream