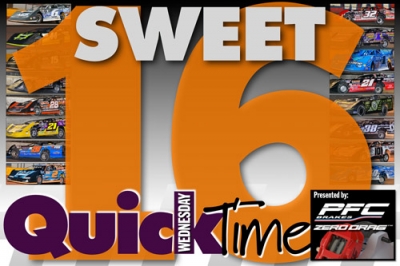 If you felt like you’d never seen so many drivers reach victory lane before at Georgia-Florida Speedweeks, you were right. With only only two drivers winning more than once, a record-setting 16 drivers in 18 Super Late Model races reached victory lane.

While it’s been common to have 10 or more winners since the winter action expanded in the late 1990s, 16 marks an all-time high. That eclipses the record of 14 winners in 16 races in 2004, a season enhanced by Volusia running a Speedweeks-high nine events.

Before that, 13 winners reached victory lane in Super Late Model events in back-to-back years in 1998 and ’99, the only year in the past 20 where there wasn’t a single repeat winner.

The 16-winner mark will likely be tough to break as there have only been 16 or more Speedweeks races seven times in history. Here’s a breakdown of the last 19 Speedweeks, according to DirtonDirt.com records:

A few other interesting morsels from Speedweeks:

• This year marked the first time two Florida-based drivers have captured more than one Florida Speedweeks event since 1997 when Keith Nosbisch of Valrico won at East Bay and Earl Pearson Jr. of Jacksonville won the Volusia finale.

• This year marked the first since 2010, and only the second in the last seven seasons, without a repeat winner at Volusia.

Drivers who raised their stock during Georgia-Florida Speedweeks, or saw their fortunes fall:

Bullish
Brady Smith, Solon Springs, Wis.: Reeling off five consecutive finishes of third or better is tough anytime, anywhere, but especially against the rigorous competition of Speedweeks. The driver who has been selective about long trips from home in recent seasons might be encouraged to venture out more in 2014.
Earl Pearson Jr., Jacksonville, Fla.: His four top-five finishes in six starts was best percentage-wise of any Speedweeks driver. He’s been the lone national touring driver in a Longhorn Chassis for years, but the addition of the Moyers and Davenport — and more to come? — has clearly boosted the Bobby Labonte Racing piece.
Kyle Bronson, Brandon, Fla.: The 23-year-old's first World of Outlaws Late Model Series victory in Volusia’s finale put the spotlight on him, but he’d been fast all week. Look for more success out of Bronson in the regular season and, next February, let’s see what he can do at East Bay, too.

Bearish
Jimmy Owens, Newport, Tenn.: The three-time Lucas Oil Series champion has had slow starts before, but this one feels different. His test-drive of Darrell Lanigan’s Club 29 Race Car hints that his eighth year in a Bloomquist Race Car could be his last.
Bobby Pierce, Oakwood, Ill.: The 17-year-old’s East Bay victory salvaged what was otherwise a struggling trip to Florida for a driver who appeared to be on the cusp of becoming a Speedweeks star. Likely just a blip for a driver who heightened expectations with his impressive 2013 season.
Dennis Franklin, Gaffney, S.C.: The three-time and reigning Carolina Clash Super Late Model Series champion was never a factor at Golden Isles or East Bay, diminishing the chances of a considered rookie run on the Lucas Oil Series.

Backstretch: By the numbers (director’s cut)

We crunched the Speedweeks numbers on Monday. Here are a few that didn’t make the first cut:

0: Successful burnouts Kyle Bronson completed after his career-best victory at Volusia (hopefully he’ll get another shot at it).

2: Maximum number of Ice cream cones one driver should attempt to carry through the Volusia pits.

@Kenny_Wallace: MY choice for @NASCARHall is "Larry Phillips" who is a BIG TIME WINNER out of Springfield MO and Taught @RustyWallace and @markmartin.

Feb. 27, 1993: Scott Bloomquist of Mooresburg, Tenn., wins at Waycross (Ga.) Speedway for the first of his series-leading 100 career victories on the Hav-A-Tampa Dirt Racing Series.

Feb. 26, 2006: Mark Whitener of Middleburg, Fla., after his team made an engine swap following his heat race, earned $5,000 at Golden Isles Speedway near Brunswick, Ga., for his first National Late Model Series victory. Whitener overtook Alex Vickers midway through the feature and beat Brett Carlton to the checkers.

• At least two Longhorn Chassis drivers will finish in the top 10.

• The winner won’t come from the list of winners from NDRL’s nine non-points events in January at Tucson, Ariz., and El Paso, Texas.

• A single home-state driver will crack the starting field.

Editor’s note: This is the first Quick Time edition of 2014. The weekly feature will continue through early November.