By Todd Turner and Andy Savary 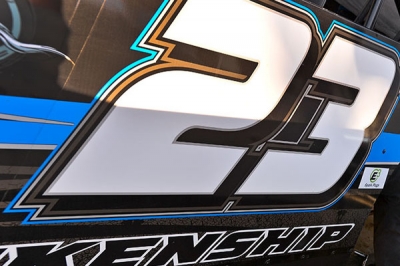 0: Pies in the face of World of Outlaws publicist Kevin Kovac, down two from 2013.

1: Average number of lead changes in 18 races. Six races had no lead changes, including all three features at Golden Isles.

2: Doubleheader events during Speedweeks as Golden Isles and East Bay each ran two complete programs in a single day to make up for rainouts.

4: First-time winners at Volusia’s 43rd annual DIRTcar Nationals presented by Summit Racing Equipment, the most since 2004.

4: Lead changes in Billy Moyer’s Feb. 14 victory at East Bay, the most in any Speedweeks feature.

5: Tracks where Tim McCreadie of Watertown, N.Y., competed, more than any other Speedweeks driver.

5: Flat tires before a lap was a single lap was complete in East Bay’s Feb. 13 feature.

8: Top-five finishes for Brandon Sheppard, the most of any Speedweeks driver.

13: Cars entered at North Florida Speedway, the fewest of any Speedweeks event.

14: Speedweeks races won by drivers starting in the front row. No winner started worse than fifth.

14: Speedweeks drivers from Georgia, the most of any state. Eleven drivers represented Florida and 10 were from Pennsylvania.

15: Feature starts for Gregg Satterlee of Indiana, Pa., the most of any Speedweeks driver.

16: Total Speedweeks winners, likely the most ever in Super Late Model Speedweeks history.

21: Number of drivers failing to transfer to a Speedweeks feature race.

32.7: Average car count at Golden Isles Speedway, which had a multi-day event for the first time since 2011.

40.2: Average age of Speedweeks winners, two years older than last year. More than half the winners were at least 41 years old.

48: Cars entered Feb. 18 at East Bay, the most of any Speedweeks event on a night when MavTV televised the Lucas Oil tour's first live event. Last year’s highest car count was 55 at Volusia.

97: Drivers entering at least one Speedweeks event, 17 fewer than last year. The all-time record was 175 drivers in 2004.

1,842: Friendly jokes at the expense of Lucas Oil Series marketing director Wayne Castleberry at East Bay’s opener after he was plunked on the head by a rock that contributed to a delay in opening night action.

34,100: Dollars earned by Brandon Sheppard from feature purse winnings, the most of any driver. Five drivers (including Scott Bloomquist, Brady Smith, Steve Francis and Billy Moyer) earned at least $24,000.